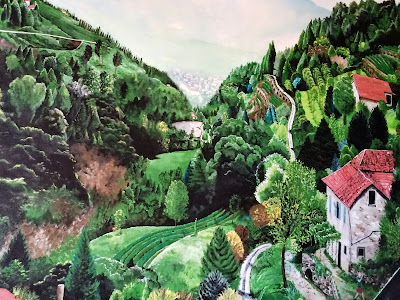 A Tuscan scene in Wallace’s Taverna … a scene that would not be strange to refugees in the Middle East (Photograph: Patrick Comerford, 2014)

Before the carol service in Marlay Park ended last night, one of the priests from Ballinteer Parish asked us to remember Christians in many parts of the Middle East who would not be free to gather in public to sing carols this Christmas or the celebrate Christmas.

These are all themes in today’s Middle East, and they came up in wandering conversations over lunch this afternoon in Wallace’s Taverna in the Italian Quarter in Dublin this afternoon.

Earlier, in the morning, I had been the sub-deacon at the Eucharist in Christ Church Cathedral, Dublin, assisting at the celebration and at the administration of the Holy Communion. As we prepared to leave the chancel and the organist began to play the recessional voluntary, the lights went out throughout the cathedral, the alarms sounded, and we left in silence.

There was no fire, but roadworks or utility works outside had cut the power supply to the cathedral, and you could say, I suppose, that a people who had seen great lights walked out in darkness. 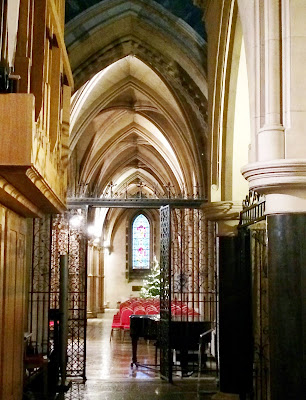 Waiting for Christmas ... in Christ Church Cathedral before the Eucharist on the Fourth Sunday of Advent (Photograph: Patrick Comerford, 2014)

Later, four of us met in Walace’s Taverna for lunch, and a family member recounted stories from his visits to Beirut, the Beeka Valley and Syrian refugee camps in Lebanon, and Antakya in southern Turkey and places east along the borders with Syria and Iraq.

The photographs from were amazing. They are not mine to show, but they included a large domed mosque in Beirut, lit up with stars and an impressive, tall Christmas Tree; Armenian and Maronite churches; a Druze khalwat, vineyards and cultivated terraces in the Bekaa Valley; and signs for some of the best Lebanese vineyards, including Chateau Musar, Clos Saint Thomas and Cave Kouroum.

There were photographs too of Syrian refugee camps, and Syrian children in makeshift schools.

And we discussed the distressing plight of the Yazidi refugees, all but forgotten after intense media attention a few months ago.

The photographs of the mosque with Christmas decorations – including two reindeer – and the mixture of religious traditions led to a discussion of the delicate balance in Lebanon which was once a multi-confessional state, how the protection of religious and ethnic minorities has been lost in Syria, and how it is not just Christians but people from many other faiths, including the Druze and Yazidi people, and many Muslims of different schools, are not free to gather and worship in the way they would like.

Those Syrian children looked as though could have been children in any school in Greece or Italy.

We were seated at a table by a window, looking out onto the Quays and the bridges over the River Liffey. Behind our table, a mural depicted a typical scene in Tuscany, with vineyards, cultivated terraces, bridges and a romantic Tuscan town in the distance.

It was a scene that those refugee children from Syria in schools and camps in Lebanon and Turkey could have identified with only a short time ago. I am sure tranquil scenes like this were once the norm in many parts of Lebanon, Syria and Turkey.

Christmas should be a time of peace for all – for children especially, and not just for Christians alone:

O little town of Bethlehem,
how still we see thee lie!
Above thy deep and dreamless sleep
the silent stars go by;
yet in thy dark streets shineth
the everlasting Light;
the hopes and fears of all the years
are met in thee tonight.

O morning stars, together
proclaim the holy birth,
and praises sing to God the King,
and peace to all on earth.
For Christ is born of Mary;
and gathered, all above,
while mortals sleep, the angels keep
their watch of wondering love.

How silently, how silently,
the wondrous gift is given!
So God imparts to human hearts
the blessings of his heaven.
No ear may hear his coming,
but in this world of sin,
where meek souls will receive him, still
the dear Christ enters in.

O holy Child of Bethlehem,
descend to us, we pray;
cast out our sin, and enter in;
be born to us today.
We hear the Christmas angels
the great glad tidings tell;
O come to us, abide with us,
our Lord, Emmanuel. 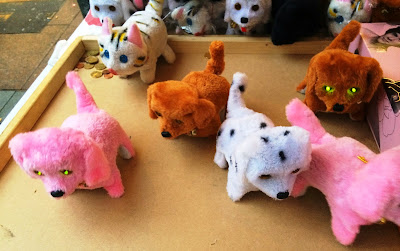 A toy dog is not just for Christmas? … a trader’s stall in Henry Street this afternoon (Photograph: Patrick Comerford, 2014)

Later, we went strolling through the streets behind Ormond Quay and Bachelor’s Walk to see the bustle of last-minute Christmas shopping in Henry Street and Mary Street.

There were no “last of the Cheeky Charlies” to get, and the latest must-have to buy as a last-minute bargain seems to be a selfie stick allowing you to take “selfies” with ample panoramic background.

I also took a detour into the “Church” – the former Saint Mary’s Church of Ireland parish church which has been turned into a café and bar. But that’s a story for another day.

Behind the Church, there was a funfair in Wolfe Tone Street, and few trees were lit up in bright lights – but they came nowhere near the delightful sight of Christmas trees and reindeer on that mosque in Beirut. 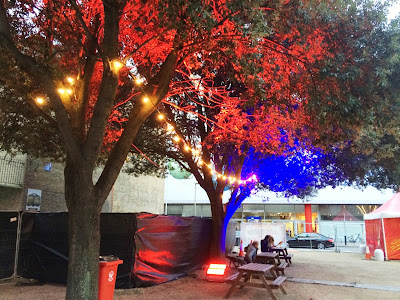 Posted by Patrick Comerford at 20:14