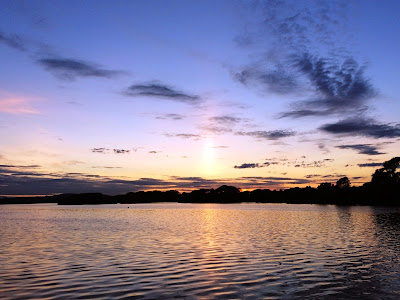 ‘From east to west shall shine / The judgment light ... ’ sunset on Lough Ramor at Virginia, Co Cavan (Photograph: Patrick Comerford, 2014)

As part of my spiritual reflections for Advent this year, I am looking at an appropriate hymn for Advent each morning. This morning [22 December 2014], I have chosen the Advent hymn ‘When came in flesh the incarnate Word’ by Joseph Anstice (1808-1836).

This hymn is not included in Irish Church Hymnal, but is part of the Advent collection in the New English Hymnal (No 17).

Joseph Anstice was born in 1808, Madeley, Shropshire, the son of William Anstice of Madeley. He went to school in Enmore, near Bridgwater, and Westminster, before going to Christ Church, Oxford, where he gained two two prizes in English and graduated as a double first.

Anstice was only 22 when he was appointed Professor of Classical Literature at King’s College, London.

His works included Richard Coeur de Lion (1828), a prize poem; The Influence of the Roman Conquest upon Literature and the Arts in Rome (Oxford prize Essay); and Selections from the Choice Poetry of the Greek Dramatic Writers, translated into English Verse (1832).

He was 28 when he died at Torquay on 29 February 1836. A few months later, his hymns were printed in June 1836 as Hymns by the late Joseph Anstice, M.A., formerly Student of Christ Church, Oxford, and Professor of Classical Literature, King’s College, London (Bridgwater, 1836).

The book includes 52 hymns and a poem ‘To my Hymn Book.’ The hymns were all dictated to his wife during the last few weeks of his life, and were composed in the afternoon, “his brighter morning hours being given to pupils up to the very day of his death.” The circumstances under which they were written account for the prevailing sadness that characterises the hymns.

The tune Walsall, used for this hymn in the New English Hymnal, is found in A Choice Collection of Psalm tunes (1721) by William Anchors. It has been attributed to Henry Purcell (1658-1695), although there is no evidence to support this claim.

Purcell was one of the best known English composers of the baroque period, writing operas, plays and songs. Purcell was born in London on 10 September 1658, and began his musical career as a chorister in the Chapel Royal.

He was writing music as early as the age of 8, when his three-part song appeared in Playford’s Catch That Catch Can. Purcell worked as an organ tuner in Westminster Abbey (1674-78). His earliest anthem, ‘Lord, who can tell,’ was composed in 1678. It is a psalm that is prescribed for Christmas Day and also to be read at Morning Prayer on the fourth day of the month.

In 1685, he wrote two of his finest anthems, I was glad and My heart is inditing, for the coronation of James II. In 1687, Purcell also composed a march and quick-step, which became so popular that Lord Wharton adapted it to the fatal verses of Lillibullero. His chamber opera Dido and Aeneas was first performed in 1689.

Purcell was at the height of his career when he died on 21 November 1695 at his home in Dean’s Yard, Westminster, and he was buried in Westminster Abbey beside the organ in the north aisle. The music he had earlier composed for Queen Mary’s funeral was performed during his funeral too.

Purcell’s legacy is a uniquely English form of baroque music. He is generally considered one of the greatest English composers; no other native-born English composer approached his fame until Edward Elgar. He has had a strong influence on English composers in the 20th century, especially Benjamin Britten.

The Dean’s Yard at Westminster Abbey ... Henry Purcell died at his home in Dean’s Yard on 21 November 1695 (Photograph: Patrick Comerford)

According to Pete Townshend of The Who, Purcell was among his influences, particularly evident in the opening bars of The Who’s Pinball Wizard.

When came in flesh the incarnate Word, by Joseph Anstice:

When came in flesh the incarnate Word,
The heedless world slept on,
And only simple shepherds heard
That God had sent his Son.

When comes the Saviour at the last,
From east to west shall shine
The judgment light, and earth aghast
Shall tremble at the sign.

Then shall the pure of heart be blest;
As mild he comes to them,
As when upon the Virgin’s breast
He lay at Bethlehem:

As mild to meek-eyed love and faith,
Only more strong to save;
Strengthened by having bowed to death,
By having burst the grave.

Lord, who could dare see thee descend
In state, unless he knew
Thou art the sorrowing sinner’s friend,
The gracious and the true?

Dwell in our hearts, O Saviour blest;
So shall thine advent’s dawn
’Twixt us and thee, our bosom-guest,
Be but the veil withdrawn.