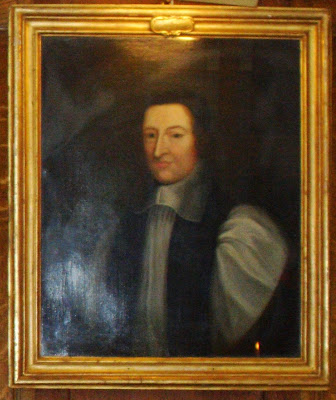 I checked into Sidney Sussex College, Cambridge, this afternoon [28 August 2016] and I am staying here for most of the coming week as a participant in the annual summer conference organised by the Institute for Orthodox Christian Studies. I have rooms on Stairs L in Cloister Court, looking out onto the Fellows’ Lawn, and beyond that to the Fellows’ Garden.

A schoolfriend from Malahide who lives near Cambridge still refuses to meet me inside the gate of Sidney Sussex because Oliver Cromwell’s head is buried in the antechapel and his portrait, ‘warts and all,’ hangs in the Hall. For my friend, this would be the last straw, even though over the years I have often dined beneath that portrait and the chapel and antechapel are closed this week for essential repairs.

But, while Cromwell may have been one the better-known undergraduates at Sidney Sussex, he never actually graduated he and left Cambridge without a degree.

On the other hand, I have also dined beneath a portrait of a Sidney graduate with more positive connections with Ireland: the portrait of John Bramhall (1594-1663), Archbishop of Armagh, hangs in the Old Library, almost directly above the supposed burial place of Cromwell’s head.

John Bramhall was one of the key Anglican theologians and apologists of the 17th century known as the Caroline Divines. He firmly defended Anglicanism, against both Puritans and Roman Catholics, and he was critical of the materialism of Thomas Hobbes.

Bramhall was born in Pontefract, Yorkshire. He matriculated at Sidney Sussex College in 1609, and graduated BA (1612), MA (1616), BD (1623) and DD 1630. Bramhall400 years ago, in 1616, and soon after he was presented to the parish of South Kilvington, Yorkshire, by Sir Christopher Wandesford, a prominent Yorkshire politician who later became MP for Kildare and Lord Deputy of Ireland.

Bramhall went to Ireland in 1633 with Wandesford’s friend and distant cousin, Thomas Wentworth, and almost immediately he was appointed Archdeacon of Meath. A year later, he was appointed Bishop of Derry and he was consecrated in the chapel of Dublin Castle on 16 May 1634.

Bramhall promptly took his seat in the Irish House of Lords, and played a key role a few weeks later in the Irish Parliament in securing the passing of acts for the preservation of church property.

Later that year, he was instrumental in the Irish Convocation adopting the 39 Articles in addition to the Irish Articles drawn up by Archbishop James Ussher in 1615. However, when Bramhall tried to get Convocation to adopt the English canons of 1604, he came into conflict with Ussher.

Their conflict was resolved when distinct Irish canons were passed, but Bramhall had a share in writing them. The 94th canon, endorsing a policy of William Bedell, Bishop of Kilmore, provided for the use of the Bible and the Book of Common Prayer in the vernacular in Irish-speaking districts.

In August 1636, Bramhall joined Henry Leslie, Bishop of Down and Connor, in moving against five Puritan ministers when they refused to subscribe the new canons. They included Edward Brice (1569-1636), the first Presbyterian appointed to a parish in Ireland.

In his conflict with Presbyterians, Bramhall came to the assistance of the Revd John Corbet of Bonhill, who had been deposed by the Dumbarton Presbytery in Scotland for supporting the Scottish bishops, refusing to subscribe to the assembly’s declaration against prelacy and for writing a ‘pugnacious’ tract against the Covenanters.

In 1639, Bramhall found Corbet a parish in the Diocese of Achonry. Although Corbet was nominated by Wenworth, his appointment created a conflict between Bramhall and Archibald Adair, Bishop of Killala and Achonry. Adair was a Puritan. And because of his views on Corbet he was tried as a supporter of the Scottish Covenant. Adair was fined £2,000, jailed indefinitely and deposed in 1640. But his trial and sentence alienated Scottish settlers in Ireland. Later that year, the Irish House of Commons drew up a remonstrance, claiming the Derry plantation had been ‘almost destroyed’ by Bramhall’s policies.

Eventually, Adair’s deposition was set aside, and in 1641, following the trial and execution of Bishop John Atherton, he was moved to the Diocese of Waterford and Lismore. However, he was forced to flee Ireland during the 1641 rebellion, and died in Bristol in 1647.

Meanwhile, Bramhall’s patron Wentworth, by then Earl of Strafford, was impeached for treason by the English House of Commons. The Ulster Presbyterians presented the English Parliament with a petition including 31 charges against the bishops of the Church of Ireland. On 4 March 1641, the Irish Commons impeached Bramhall, along with the Lord Chancellor, the Chief Justice of the Common Pleas, and Sir George Radcliffe (1599-1657), who built Rathmines Castle in Dublin, as participants in Strafford’s alleged treason.

Bramhall left Derry for Dublin, and took his place in the Irish House of Lords. He was accused of unconstitutional acts and jailed. His defended himself, saying he had only sought the good of the Church, and wrote to Ussher in London. Eventually, King Charles I intervened, and Bramhall was freed, although he was never acquitted, and he returned to Derry before moving back to England in 1642.

He remained in Yorkshire until the Battle of Marston Moor on 2 July 1644. He supported the Royalist cause in his sermons and his writings, and sold his plate to help the king. He fled abroad with Lord Newcastle and other royalists, and arrived in Hamburg on 8 July 1644. When the Treaty of Uxbridge was signed in January 1645, Bramhall and Archbishop Laud of Canterbury were specifically excluded from the proposed general pardon.

In Paris, Bramhall met Hobbes and argued with him on liberty and necessity. There debate would continue in later years. He then moved to Brussels, where he preached at the chapel in the English embassy, as well as in Antwerp.

When Bramhall returned to Ireland in 1648, he did not return to his diocese in Ulster. He was at Limerick in 1649, when he received the profession of the dying James Dillon, 3rd Earl of Roscommon. He was in Cork that October when the city declared for Cromwell and the Parliament. It was a narrow escape, and once again he was an exile on the Continent. He moved to Spain in 1650, and he was one of the bishops excluded from the Act of Indemnity in 1652.

After the Restoration of Charles II in October 1660, Bramhall returned to England and then to Ireland. On 18 January 1661, he became Archbishop of Armagh in succession to James Ussher, who had died in 1656. On 27 January 1661, he presided at the consecration in Saint Patrick’s Cathedral, Dublin, of two new archbishops and 10 new bishops for the Church of Ireland.

Bramhall presided at Convocation, and on 8 May 1661 he was chosen as Speaker of the Irish House of Lords. Within days, both Irish houses of parliament had erased the old charges against Bramhall from their records.

As Primate, he was responsible for the Irish Parliament passing declarations requiring conformity to episcopacy and to the liturgy of the Book of Common Prayer, and ordered the burning of the Covenant. However, Bramhall could not carry his bills for a uniform tithe system and for extending episcopal leases. Until 1667, there was no Irish Act of Uniformity, and all that was in place was the old statute of 1560 on the use of Edward VI’s second Book of Common Prayer. But even before the Act of Uniformity was passed in England in 1662, the nonconformists were ejected by the bishops of the Church of Ireland.

Bramhall had used money from the sale of his property in England to buy an estate at Omagh, Co Tyrone, in the 1630s. He was defending his rights in a court in Omagh against Sir Audley Mervyn when stroke deprived him of consciousness, and he died on 25 June 1663. 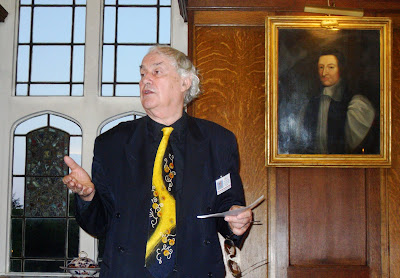 Professor David Frost of the Institute for Orthodox Christian Studies, speaking in the Old Library in Sidney Sussex College, Cambridge, under the portrait of Archbishop John Bramhall (Photograph: Patrick Comerford)

Bramhall’s importance lies in his writings while he was in exile. Deprived of episcopal office in Ireland, he turned to responding to attacks on Anglicanism.

In 1643, he wrote Serpent Salve, a defence of episcopacy and monarchy in response to attacks by the Puritans and Presbyterians. In 1649, his Fair Warning against the Scottish Discipline attacked the theology and claims of the Presbyterians and the Puritans.

Bramhall also defend Anglicanism against Roman Catholics. In 1653, he countered Théophile Brachet de la Milletière’s restatement of the doctrine of transubstantiation with a reply that restated the Anglican understanding of the Real Presence in the Eucharist.

His five treatises replying to Roman Catholics include a confutation of the ‘Nag’s Head’ fable. He also debated with Richard Smith, the titular Bishop of Chalcedon who had the episcopal leadership of Roman Catholics in England, telling him how he hoped to live to see the day when all Christian churches were united again.

His works were collected by John Vesey and first published in Dublin in 1677. They were reprinted in five volumes in the Library of Anglo-Catholic Theology (Oxford, 1842-1845).