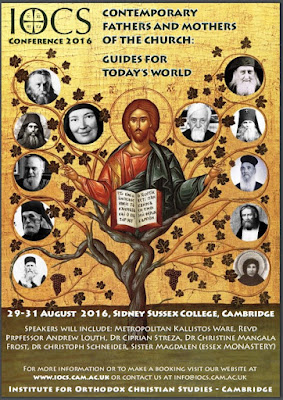 The annual conference of the Institute for Orthodox Christian Studies opens in Sidney Sussex College, Cambridge, this morning [29 August 2016].

This year’s conference addresses the theme: ‘Contemporary Fathers and Mothers of the Church: Guides for Today’s World.’

The last day of the conference on Wednesday includes a visit to the Monastery of Saint John the Baptist in Tolleshunt Knights in Essex, which has become an annual pilgrimage for me.

I am staying for the week in rooms on Stairs L in Cloister Court in Sidney Sussex College, overlooking the Fellows’ Lawn and beyond that the Fellows’ Garden. This morning before breakfast, I hope to attend the early morning Eucharist in Saint Bene’t’s Church nearby.

Registration for the conference begins at 9:30, followed by coffee and tea. The speaker at this morning’s first session is Dr Christoph Schneider, the Academic Director of IOCS, who is addressing ‘Fatherhood and Sacramentality.’

In the first session after lunch (2 p.m. to 3.30 p.m.), the Romanian Orthodox theologian Dr Ciprian Streza of Sibiu is speaking on ‘Father Dumitru Staniloae – The Liturgy: The Kingdom of the Holy Trinity.’

Professor Dumitru Stăniloae (1903-1993) was the leading Romanian Orthodox theologian of the 20th century. For over 45 years, he worked on a Romanian translation of the Philokalia, a collection of writings on prayer by the Church Fathers, alongside the monk, Father Arsenie Boca, who brought manuscripts from Mount Athos. His book, The Dogmatic Orthodox Theology (1978), made him one of the best-known theologians of the last century. He also wrote commentaries on Patristic writers, including Saint Gregory of Nyssa, Saint Maximus the Confessor, and Saint Athanasius of Alexandria.

Later this afternoon, the Revd Professor Andrew Louth is discussing ‘Father Sergii Bulgakov’ (4 p.m. to 5.30 p.m.) Father Andrew is a priest of the Russian Orthodox Church and in 1996 he became the Professor of Patristic and Byzantine Studies at Durham University, where he is also the Orthodox chaplain. Father Sergeii Nikolaevich Bulgakov (1871-1944) was a Russian Orthodox theologian, philosopher, and economist who died in exile in Paris.

The day ends with Evening Prayer in the Knox-Shaw Room in Sidney Sussex at 5.30 and dinner at 6.30.

Tomorrow [Tuesday, 30 August], after Morning Prayer and breakfast, Dr Christine Mangala Frost is presenting a paper on ‘Signs and Wonders: a Comparative Study of Spiritual Elders in Orthodox Christian and Hindu Traditions’ (9.30 to 11 a.m.). Later in the morning, Metropolitan Kallistos of Diokleia is to speak on: ‘Elder Amphilochios of Patmos’ (11.30 to 1 p.m.). Elder Amphilochios (1889-1970) was a priest and monk who lived on Patmos, where he was Abbot (1935-1937) of the Monastery of the Apocalypse, until the occupying Italians forced him into internal exile in Greece, first in Athens and later on Crete.

In the first afternoon session tomorrow, Dr Razvan Porumb speaks on ‘Father Nicolae Steinhardt’ (2 to 3.30 p.m.). Dr Porumb is Vice-Principal of the IOCS, where he is a postdoctoral fellow and a lecturer. Dr Nicolae Steinhardt (1912-1989) was a Romanian theologian, hermit and confessor from Bucharest. He was a Jewish journalist who converted to Orthodox Christianity while he was a prisoner. Late in life, he entered in Rohia Monastery, where he worked as the monastery’s librarian and dedicated himself to writing. There, his growing reputation as a counsellor and father-confessor attracted many visitors to Rohia.

Later in the afternoon, the Romanian theologian and priest, the Revd Dr Liviu Barbu, is speaking on: ‘What it takes to be a saint today? A tentative sketch of a profile’ (4 p.m. to 5.30 p.m.).

Again, the day concludes with Evening Prayer at 5.30 and dinner.

After breakfast on Wednesday morning [31 August], we leave for our visit to the Monastery of Saint John the Baptist, near Tolleshunt Knights in Essex. The programme there includes a tour of the monastery and a lecture by Sister Magdalen on ‘Mother Elisabeth (1893-1993).’

We return to Cambridge and Sidney Sussex College later on Wednesday afternoon.

The Institute for Orthodox Christian Studies, which was founded in 1999, is a full member of the Cambridge Theological Federation, an Allied Institution of the University of Cambridge and a Regional Partner of Anglia Ruskin University. Full details of this week’s conference are available at the IOCS website. 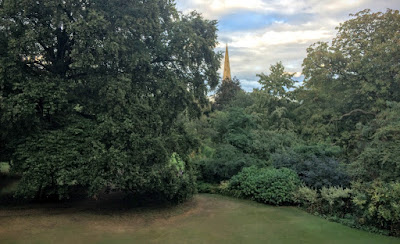 Looking out at Fellows’ Lawn from my room in Cloister Court in Sidney Sussex College, Cambridge, with the spire of All Saints’ Church in the background (Photograph: Patrick Comerford, 2016)