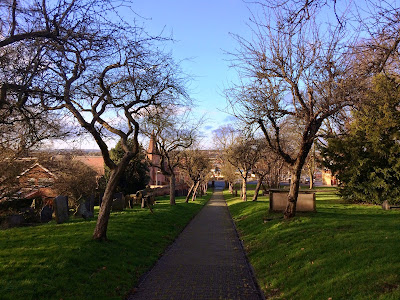 Saint Michael’s Churchyard is one of the largest and one of the oldest burial grounds in England (Photograph: Patrick Comerford, 2015)

Before I left Lichfield yesterday, I visited Saint Michael’s parish church on Greenhill and one of the oldest and one of the largest burial grounds in England.

Although much of the present church on a sandstone ridge on the east side of Lichfield dates from rebuilding projects in the 1840s, there has been a church on this high ground since at least 1190.

The legend was largely forgotten by the 1500s, but it was revived later that century when Lichfield was incorporated as a borough in 1548. The new civic council needed an image for its seal but wanted to break with the pre-Reformation image of Saint Chad. The corporation decided to use the story of the 999 martyrs on its seal, and so gave new life to a dead and unfounded story.

It may be that this legend led to George Fox, the founding Quaker, to declare: “Woe unto the bloody City of Lichfield.”

After his release from prison in Derby, Fox walked to Lichfield. When he was about a mile outside Lichfield, he felt a command from God to take off his shoes and to walk into the city. There in the Market Square, he stood barefoot in the snow as he cried out again and again: “Woe unto the bloody City of Lichfield.”

A few decades later, the Staffordshire historian Robert Plot declared that the nearby area now known as Christian Fields was the site of their martyrdom and it has born the name ever since. Of course, no archaeological evidence was ever found to support these stories from Geoffrey of Monmouth and Robert Plot. Today, Christian Fields is a nature reserve south of Eastern Avenue, between Dimbles Lane and Curborough Road.

Inside Saint Michael’s Church … the interior has been altered radically in the last two centuries (Photograph: Patrick Comerford, 2015)

Despite the false foundations for this legend and the religious impulses it has inspired, Saint Michael’s and its churchyard were still worth visiting once again yesterday afternoon.

There may have been a church on this site at Greenhill from an early date, and once again local legend says the first church on the site was consecrated by Saint Augustine. Other accounts say it was because the site was so well known that Saint Chad was attracted to Lichfield, making it the centre of his new diocese in Mercia. 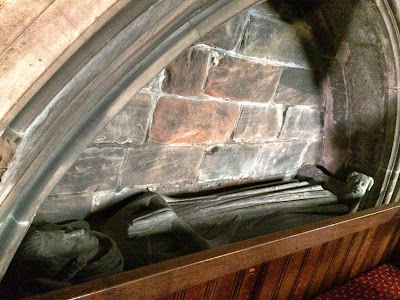 The tomb of William de Walton in the north wall of the chancel in Saint Michael’s (Photograph: Patrick Comerford, 2015) 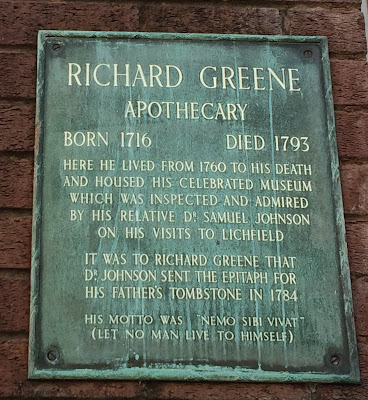 “I have enclosed the epitaph for my Father, Mother, and Brother, to be all engraved on the large size, and laid in the middle aisle in St. Michael’s church, which I request the clergyman and church-wardens to facilitate.

“The first care must be taken to find the exact place of interment, that the stone might protect the bodies. Then let the stone be deep, massy and hard; and do not let the difference of ten pounds, or more, defeat your purpose.

“I have enclosed ten pounds, and Mrs Porter will pay you ten more, which I gave her for the same purpose. What more is wanted shall be sent; and I beg that all possible haste be made, for I wish to have it done while I am yet alive. Let me know, dear Sir, that you receive this. I am, Sir, your most humble servant, Sam Johnson.”

On the same day, he wrote to Lucy Porter: “I am very ill, and desire your prayers. I have sent Mr Green the epitaph and a power to call on you for ten pounds.”

Within a fortnight, Johnson died quietly on 13 December 1784. He was buried in Westminster Abbey on 20 December. 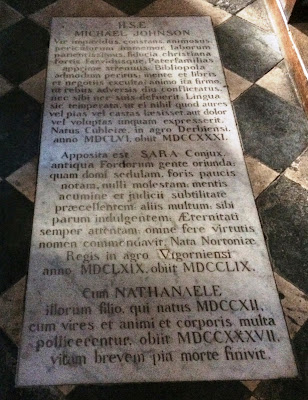 The Johnson family memorial, with the inscription commissioned by Samuel Johnson commemorating his father, mother and brother (Photograph: Patrick Comerford, 2015)

The graves in the churchyard include an unusual “saddle-back” tomb and the graves of members of the family of the poet Philip Larkin. John Brown, who sounded the trumpet for the 17th Lancers at the Charge of the Light Brigade, is also buried here. 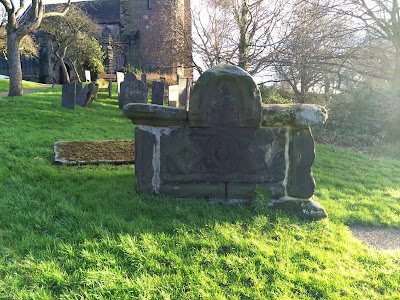 I missed the mausoleum of Canon James Thomas Law (1790-1876), a Grade II Listed Building on the northern edge of the churchyard. Law was a prebendary of Lichfield Cathedral and chancellor of the Diocese of Lichfield, a key figure in the foundation of Lichfield Theological College, and Master of Saint John’s Hospital, Lichfield (1821-1836), where I was being interviewed and filmed by Dave Moore the day before. 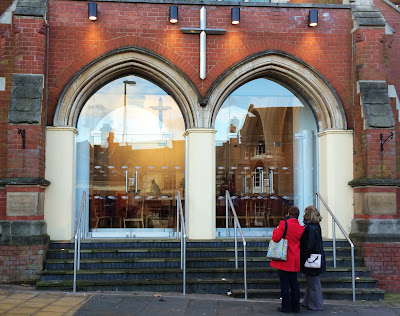 Lichfield Methodist Church … the city looks into the church, and the church looks out to the city (Photograph: Patrick Comerford, 2015)

From Saint Michael’s and Rotten Row, we walked back down through Greenhill into Tamworth Street, where we had coffee earlier in the afternoon in The Spark.

Across the street from the Spark, the Methodist Church has placed glass doors at the main entrance. It means that on a Sunday morning the church is looking out onto Lichfield, and Lichfield is looking into the church at worship … an architecturally perfect way of expressing the mission of the Church. 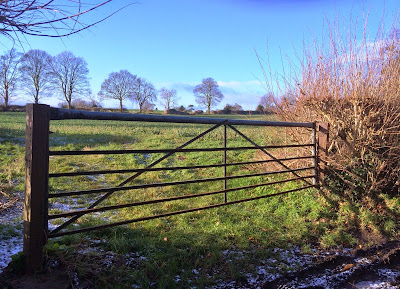 Earlier in the day, we had attended the mid-day Eucharist in Lichfield Cathedral, after a nmid-day walk by Minster Pool. In the morning, after breakfast, I had a walk in the countryside along Cross in Hand Lane. The fields were covered in a crisp morning frost, and there was a ridge of light snow down through the middle of the lane.

But by late afternoon this stay in Lichfield was coming to an end. We walked back up Beacon Street to the Hedgehog for a late lunch before catching the train to the airport. Outside the Hedgehog, the sun was setting in the fields to the west.

I was reminded of the canticle ‘Hail Gladdening Light,’ which had been sung at Choral Evensong on Thursday:

Now we are come to the Sun’s hour of rest;
The lights of evening round us shine;
We hymn the Father, Son, and Holy Spirit divine!

Worthiest art thou at all times to be sung
With undefiled tongue,
Son of our God, giver of life, alone:
Therefore in all the world thy glories, Lord, they own. Amen. 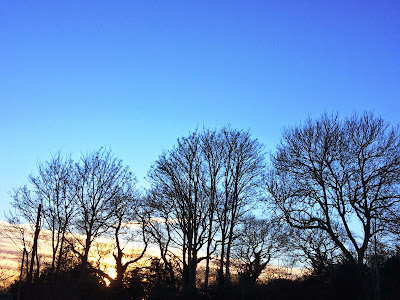 ‘Now we are come to the Sun’s hour of rest’ … sunset at Cross in Hand Lane in Lichfield on Saturday evening (Photograph: Patrick Comerford, 2015)