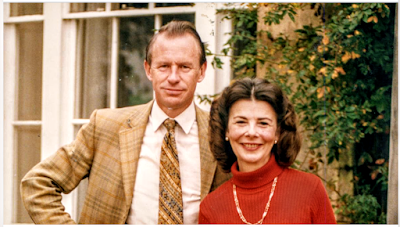 Sir Charles Wolseley and his second wife, Imogene Brown, in 1992. After their bankruptcy, they had to rely on friends

As part of the poetry and arts short films being produced in Tarbert, Co Kerry, by local poet and writer Paddy Creedon, I have recorded two stories about 19th century curates in the Tarbert who had very different backgrounds.

The Revd Sir William Augustus Wolseley (1865-1950) was a curate in the parish for almost 20 years, and later inherited one of the two titles of baronet in the Wolseley family. The Revd Dr Alexander Patrick Hanlon (1814-1898) worked as a curate in Ballylongford during the Great Famine in the 1840s, and claimed a very different title – he claimed to be the Chief of the O’Hanlon family and called himself The O’Hanlon.

I briefly referred to the Wolseley family tree, how there are connections with the Comberford family in south Staffordshire, and how there are two different titles of baronet in the two, interconnected branches of the family, one associated with Mount Wolseley in Tullow, Co Carlow, and the other, older title, associated with Wolseley, between Rugeley and Stafford in Staffordshire.

As we were filming these stories, I thought of my happy and pleasant meetings with Sir Charles Wolseley of Wolseley, who died at the age of 73 two years ago (5 March 2018) and the consequences of those meetings for my own adult life.

In 1966, to mark the ninth centenary of the Battle of Hastings, many English newspapers searched for families who could say without doubt that they were in England from before the conquest. After exhaustive searches, they found two families that could make this claim, and both families lived in Staffordshire: the Cliffords and the Wolseleys. 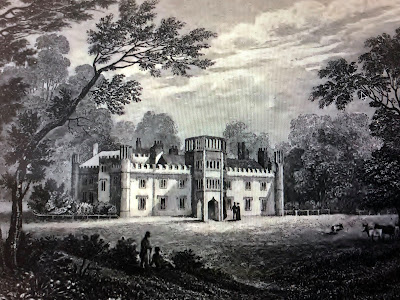 It was a well-edited feature, with a fine photograph of Charles and Anita and their young family, who welcomed me to Wolseley Park House. More features followed on the Dyott, Anson, Levett and other families, and I built up a portfolio that helped to set me up for a 30-year career journalist.

Sir Charles Garnet Richard Mark Wolseley was born on 16 June 1944. His father, Captain Stephen Garnet Hubert Francis Wolseley (1918-1944), died in France six weeks later. He was a forward spotter with the Royal Artillery and was returning to his regiment when he was shot by what is now described as ‘friendly fire.’ He died on 31 August 1944, leaving a widow, Pamela and two children, Patricia and Charles.

When Captain Stephen Wolseley’s father, Sir Edric Wolseley, the tenth baronet, died in 1954, Charles succeeded as the 11th baronet. He then 10 and at prep school in Saint Bede’s, Bishton. He moved to Ampleforth at the age of 13 and joined Father Walter in Saint Cuthbert’s House.

From Ampleforth he went to Royal Agricultural College in Cirencester, where he trained to be a chartered surveyor, later becoming a Fellow of the Royal Institute of Chartered Surveyors, (FRICS). Back at Wolseley in the late 1960s, he joined the then Staffordshire Yeomanry in the Territorial Army. He was a member for five years and called himself the ‘armchair lieutenant.’

He married Anita Fried from Epsom in 1968, and they had three daughters and a son, Annabelle, Emily, Lucy and Stephen.

When I met him, he was already working as a chartered surveyor at the Lichfield branch of Smiths Gore in Lichfield, known for its rural property consultancy services. Smiths Gore started in 1847, and was merged in recent years with Savills.

He could not understand why I wanted to move from surveying to journalism. I had already inquired about finishing my training with Wintertons in Lichfield, and he wondered why I would not join him at Smiths Gore instead. He was still in his 20s, and he pointed to lifestyle he already had.

I never joined the staff of the Lichfield Mercury, nor did I pursue the prospect of joining either Smiths Gore or Wintertons in Lichfield. Instead, I became a sub-editor with the Wexford People and moved to The Irish Times in 1974.

By then, Charles had become an associate partner at Smiths Gore in 1974, and we lost contact with each other. He too soon left Lichfield to become Lord Egremont’s agent at Petworth, managing the estates at both Petworth in Sussex and Carlisle.

He continued to return to Staffordshire, and during the shooting season there were fortnightly shoot meets at Wolseley. Charles and Anita divorced in 1984, and later that year he married the American writer Imogen (Jeannie) Brown, originally from Dayton, Ohio, who was researching a book on American heiresses who married impoverished English aristocrats.

Wolseley Park House was a 34-room Georgian home, built for the Wolseley family in 1793. The house was crammed with giant portraits of his ancestors, dating back to the reign of James I. Above the staircase, near the games room, was a giant painting of his great-grandmother, Anna Theresa Murphy, being confirmed by Pope Leo XIII.

Charles took a brave step in 1987 when he decided to leave Petworth and return to Wolseley with plans to open the 45-acre landscaped gardens, attracting 250,000 visitors a year.

Wolseley Garden Park cost £1.73 million and was opened by Lord Rothschild in 1990. But the place only took in between £26,000 and £30,000 on gate receipts in its first year. The bank withdrew funding before the garden park was completed, and so had little chance of succeeding.

Charles was made bankrupt in May 1996 with debts of £2.5 to £3 million, which he blamed on the recession and high interest rates. He lost the 1,490 acre Staffordshire estate that had been given to the Wolseley family by King Edgar in 975 AD as a reward for ridding the area of wolves – the latest generation had failed to keep the wolf from the door. 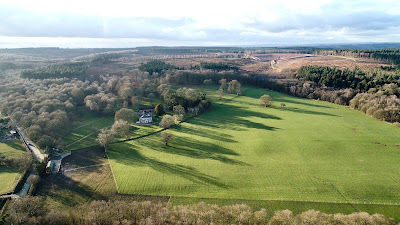 Wolseley Park House and the Wolseley estate … in hands of the Wolseley family from the year 975 (Photograph: Stefano Martini / Staffordshire Past and Present)

As parts of the land were sold off to repay his debts, Charles was allowed to stay at Wolseley Park House for a time. At one stage, his debts reached an estimated £4.6 million. The tabloid press referred to him in headlines as the ‘bankrupt baronet,’ but the people of Rugeley were kind and supported them in many ways. Frequently they discovered gifts of food, money and even a car delivered to the house.

Wolseley Park House too was sold off for an undisclosed sum by the Royal Bank of Scotland, which had been secured creditors for the failed garden park venture. The Wolseleys were left with the standard pension credit for married couples. They moved into a new barn conversion near Penkridge offered by friends, and there they lived in genteel poverty.

The Wolseley family motto is Homo Homini Lupus, ‘Man is a wolf to his fellow man’ – it became a lived experience for Charles Wolseley in recent years.

I wrote to him when I heard about his problems, enclosed a cutting of that full-page the Lichfield Mercury and the Rugeley Mercury. I thanked him for an opportunity that secured a career in journalism that lasted most of my adult life, and thanked him too for that offer at Smiths Gore.

My visits to Lichfield had been life-changing in more ways that he or I would have ever realised. A visit to the chapel of Saint John’s Hospital, Lichfield, on one sunny afternoon at the time had a profound effect on my religious life – little did I realise it was the beginning of the pilgrimage that would shape my future and eventually lead to ordination.

In his reply, he enclosed photographs of his daughter’s wedding in Malta – the same daughter who featured in that photograph in the Lichfield Mercury – and stories about his son Stephen. We agreed to meet again for dinner some time in the future when I was back in Lichfield, or perhaps in Dublin.

He was stoical and good-natured about his new circumstances, even as his debts mounted to several million pounds. Underneath all the bluster lay a heart of gold. His friends describe him as kind, considerate, loving and a great friend in spite of all the knocks that would have brought down any other man. Among his friends, he enjoyed talking about gardening, and when he gave the Latin names of plants he was never wrong. He was also a fine watercolour artist.

We never had that dinner – in Lichfield or in Dublin. Sir Charles Wolseley died on 5 March 2018. His funeral took place on 24 March 2018 at Saint Joseph and Saint Etheldreda Catholic Church, Rugeley. 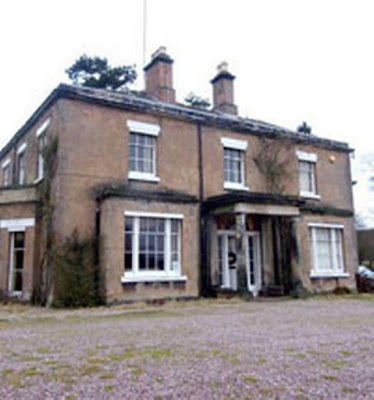 Wolseley Park House, near Rugeley, Staffordshire, was built in 1793

Charles Wolseley allowed the BFSS, (British Field Sports Society) Staffordshire Committee to use the land adjacent to Patrick Lichfield's Shugborough Hall Estate.
Charles was a great shooting man and put his Gamekeeper at our disposal. Patrick was very supportive and we ran a very successful Game Known as the BFSS Oakedge Game Fair it ran for a number of years.

Great story. They seem to have been lovely people.

Very interesting tribute to Sir Charles. I am an American genealogist myself and follow these old English family histories. My family came from Southern colonial and English aristocratic stock and Sir Charles’ grandmother through the Trafford, Feilding family was distantly related to my grandmother. They shared common descent from the Lygon family situated at Madresfield Court, Worcs. He and his wife sound like wonderful people.

Absolutely heartbreaking...I hope the 12th Baronet brings back the glory of his family by earning money. What does he do for a living ?

Up until a few years ago I used to regularly see Charles shopping at Morrisons in Rugeley. I found it quite moving that there was a man, a descendent of such history anonymously moving amongst people, doing the shopping, and returning to his small red, old car. Sad story. But then, when you invest heavily in a venture that frankly - given the times we live in and peoples' ways of spending their time and money - was doomed to failure, then sad to say, you only have yourself to blame. But yes, I did feel sorry for him and his wife. And many people have told me what a nice man he was.