Finding the hidden fountains of Rethymnon 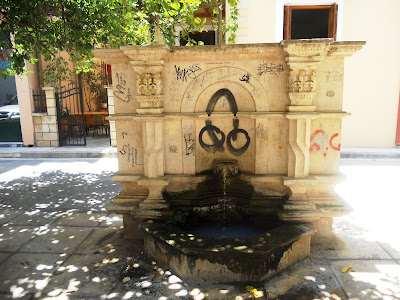 A modern fountain, erected in 1982 in 25 Martiou, a quiet square in the old town of Rethymnon (Photograph: Patrick Comerford, 2012)

Walking around Rethymon this week, it has been a pleasure to note the many fountains in the streets and the squares that have survived from the Venetian and Turkish eras.

Some of the fountains are recent, but most are centuries old, often with interesting inscriptions that remind me of last week’s Bible study at the USPG conference on the story of the Samaritan woman at the well (John 4):

You who drink water or take water from this fountain, know that this is not enough

may those who thirst drink water for my soul and pray

The water of life ... given by God Eternal. 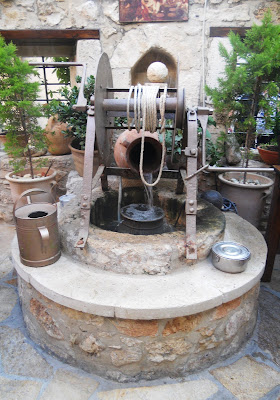 A working well that gives its name to To Pigadi, a restaurant in Xanthoudidou Street (Photograph: Patrick Comerford, 2012)

For many tourists, Petycháki Square in the old town, with its bustling restaurants and cafés, becomes the centre of Rethymnon in the evening. But until the 17th century this was also at the centre of the Venetian city, close to the main square, the churches, bell-towers, the fountains and the Loggia. 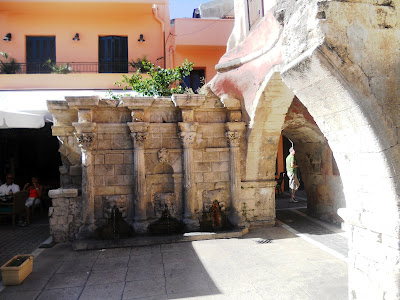 The Rimondi Fountain in the centre of the old town is a constant source of curiosity (Photograph: Patrick Comerford, 2012)

At the north end of Petycháki Square, the Rimondi Fountain is a constant focus of attention and curiosity for tourists. The fountain stands on the site of an older one that may have been here since at least 1588.

Rimondi was a Venetian rettore or governor who started building the present fountain in 1626. In the Venetian era, many towns in Crete had severe water shortages, and rain water was collected in cisterns or by digging wells, while the public fountains supplied fresh drinking water.

The front of the Rimondi Fountain consists of four small ribbed columns that stand on Ionic bases above the raised platforms that contain three small basins that were used as troughs that animals could drink at. The columns rise to Corinthian capitals that support a rich entablature, beginning with an architrave and continuing with a band of four corbels, one above each column. These corbels are adorned with acanthus leaves and support a horizontal cornice. The original inscription has been damaged and is difficult to read. 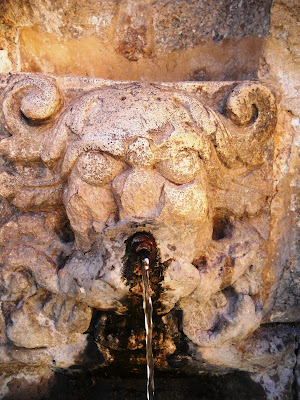 There are three recesses in the fountain, each with a water spout in the shape of a lion’s head. The central recess also has a semi-circular alcove displaying the heraldic emblem of Rimondi.

After Rethymnon fell to the Turks in 1646, the fountain was walled in and domed over for a time. However, the later Turkish additions either fell into decay or were destroyed by local inhabitants, and all that remains is one pillar. 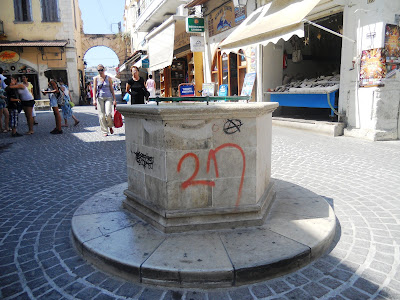 The Venetian well in Ethnikis Antistaseos, near the Porta Guora (Photograph: Patrick Comerford, 2012)

The Venetian well in Ethnikis Antistaseos, near the Porta Guora, was dug for the old city in the 16th century and continued to supply the surrounding area with fresh spring water until the 1950s.

When the well emerged again at the end of 2008, the water was found to be clean still.

Seven fountains from the Turkish or Ottoman era can be found in the streets of Rethymnon, four of which were built by the Turkish-Cretan family of Yunus Aga. 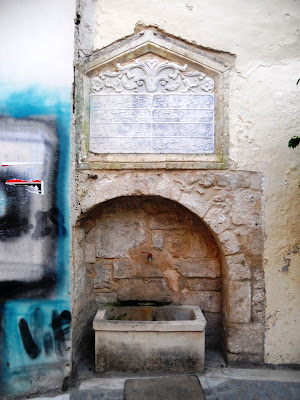 At 27 Patriárchou Grigoríou Street, there is a fountain set into an arch and dated 1863. It was erected by Yunus Aga’s son, Kasim Bey. Part of the Turkish inscription in Arabic script reads: “You who drink water or take water from this fountain, know that this is not enough: beg mercy on my soul and pray for the love of God.” 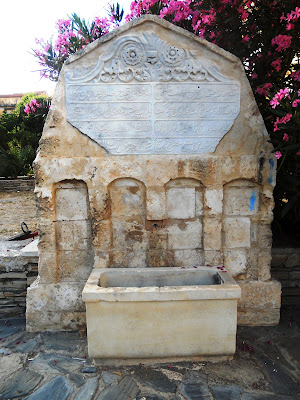 The remains of a fountain on a modern wall in a square shaped by the zig-zag street contours of Prevelakis Street (Photograph: Patrick Comerford, 2012)

In a square shaped by the zig-zag street contours of Prevelakis Street, the isolated remains of a Turkish fountain sit squat on top of a modern wall, without any water source. It was brought here from the corner of Patriárchou Grigoríou Street, where it had been first moved when Psilláki Street was being laid out.

This fountain was originally erected in 1863 by Yunus Aga’s son, Ethem Bey, and consists of a large plinth, four recesses crowned by low arches, and an inscription with a fine carving. 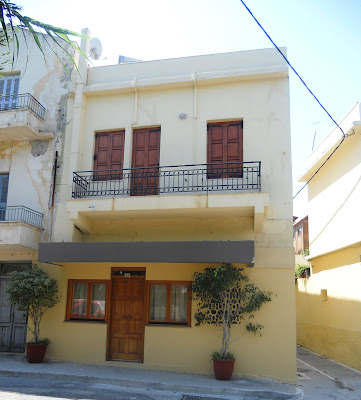 The fountain that once graced 84 Melissinoú Street is now missing (Photograph: Patrick Comerford, 2012)

A fountain was once to be found at 84 Melissinoú Street, Smyrnis Street on the corner of Smyrnis Street and below the walls of the Fortezza, where it was supported by regular-cut blocks.

The fountain had a carved inscription in Arabic script that was difficult to read. Did it date from 1785? Or is it from 1882? I may never know, for I found it impossible to find despite my many efforts this week. 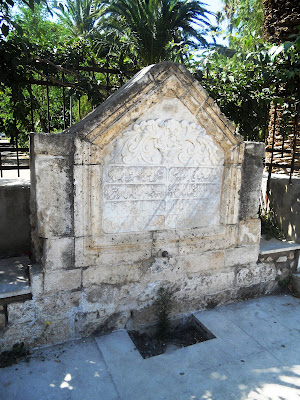 The remains of a fountain on a corner by the Municipal Gardens (Photograph: Patrick Comerford, 2012)

On Igouménou Gavriíl Street, named after Abbot Gabriel, the hero of Arkadi Monastery in 1866, the inscription of a fountain is built into the wall at the north-west corner of the Municipal Gardens. However, this fountain originally stood in the area between the Church of the Holy Cross and the modern cemetery.

This was the area where the lepers lived in Rethymnon, and the fountain, which was built in 1863 by Ethem Bey too, was known as Meskinóvrysi and was for their use.

However, when Iliakáki Street was being laid out, the fountain was demolished, and the inscription, which is all that survived, was moved to its present location. It says in part: “May the evil eye never fall upon this fountain ... may those who thirst, drink water for my soul and pray.” 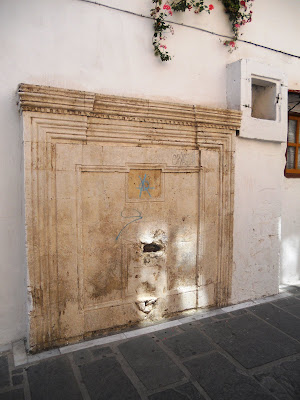 A half-ruined fountain sticks out from the line of buildings at No 63 Nikifórou Foká Street. However, the fountain is now dry, and the inscription above the spout has been lost for many decades. 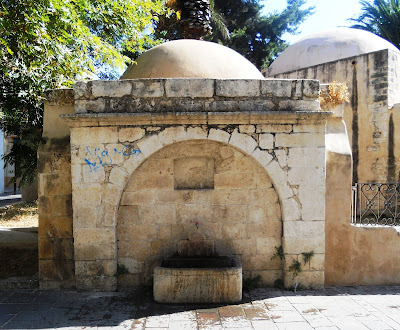 The fountain that once served the Kara Musa Pasha Mosque (Photograph: Patrick Comerford, 2012)

At the corner of Arkadíou Street and Viktors Ougos (Victor Hugo) Street, there are remains of a fountain that once served the Kara Musa Pasha Mosque. The fountain has a tasteless modern metal tap and cement basin. 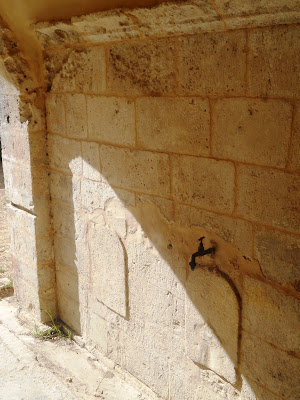 The fountain inside the mosque complex (Photograph: Patrick Comerford, 2012)

Inside the mosque complex, there is an internal fountain directly behind the fountain on the street corner. This fountain is inside a small building with a dome that may be similar to the dome that once covered the Rimondi Fountain. 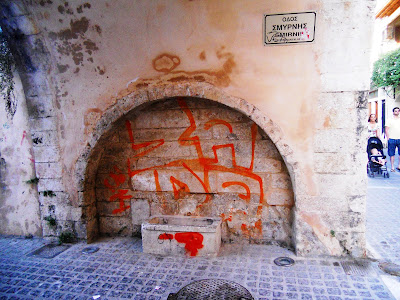 The corner fountain under the arch in Smyrnis Street (Photograph: Patrick Comerford, 2012) 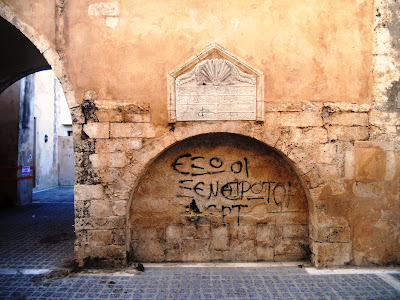 The fountain on Koronaíou Street had three spouts and is enclosed within an arch. The inscription above it has survived and says: “This fountain was placed here for all to drink from. May those who slake their thirst here pray for the soul of he that built it. 1863.” 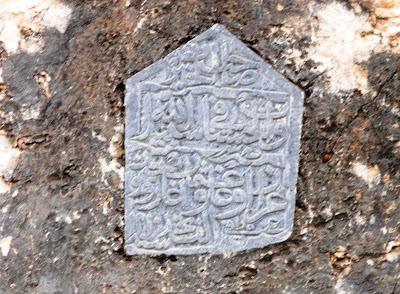 A Turkish inscription, perhaps from a gravestone, embedded in the wall to the right and above the fountain on Koronaíou Street (Photograph: Patrick Comerford, 2012)

A little to the right and higher, what looks like portion of a Turkish gravestone with an inscription in Arabic letters is embedded in the wall. 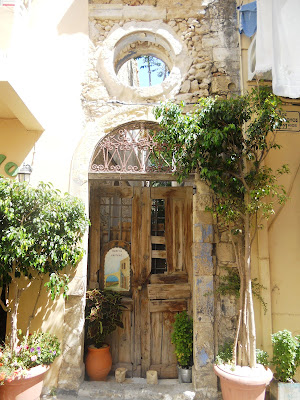 The entrance to the last surviving Hamam of Rethymnon, at 25 Radamánthyos Street, is locked and has a crumbling appearance of neglect (Photograph: Patrick Comerford, 2012)

Finally, in any discussion of the fountains of Rethymnon, it would be impossible not to mention that the old town once had two hamams or Turkish baths. One of these survives at 25 Radamánthyos Street and is said to be in a reasonably good condition, although the entrance is locked and it has a crumbling appearance of neglect from the outside.

The hamam is said to be a typical Turkish bath house, consisting of two areas and roofed by two large domes, broken by polygonal light shaft. The floor is said to be paved with large white rectangular marble slabs.

The story of Fatime, the bath attendant, was recalled in 1937 by Pandelis Prevelakis in Το χρονικό μιας Pολιτείας (The Tale of a Town). She was originally from Provence in France and was also known as Hortense. This same character appears in Zorba the Greek by Nikos Kazantzakis.

On a hill to the south-west of the old town, in the suburbs beside the Mastamba Mosque, there is also a Turkish water tank that was rebuilt by Nusret Bey in 1892 or 1893 and formally opened by Prince George of Crete, the ruler of the autonomous state between the collapse of Turkish rule and the incorporation of Crete into the modern Greek state. There was an earlier water tank on the site, but if there was a fountain too it does not survive.

On the west wall, a Turkish inscription in Arabic script reads: “The water of life of Rethymnon, given by God Eternal, in the time of the most Excellent Emperor Ibrahim Han, mercy and the remission of sins be upon him for his works of charity to his fellow men. For this life-giving work, recite the first sura of the Quran.” 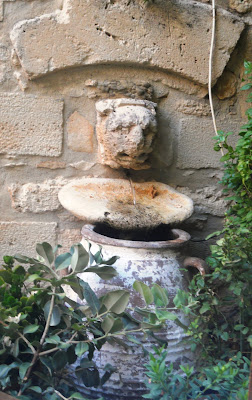 A Venetian-era lion’s head used in a decorative fountain in To Pigadi, a restaurant in Xanthoudidou Street (Photograph: Patrick Comerford, 2012)

Thank you for this nice walk through the streets of Rethymnon, and congrats for your informative site!