Through Lent with Vaughan Williams (11):
‘He who would Valiant be’ (Monk’s Gate) 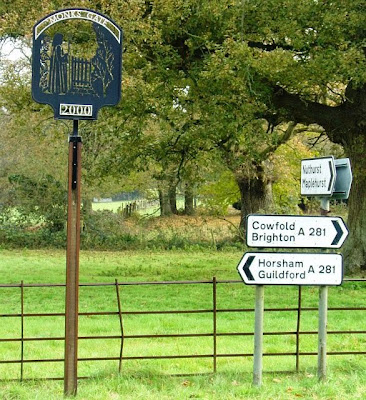 This morning [28 February 2015], I have chosen the hymn ‘He who would Valiant be’ also commonly known as ‘To be a Pilgrim,’ sung to the tune Monk’s Gate, which the New English Hymnal says was adapted from an old English folk song by Vaughan Williams. The words by Percy Dearmer (1867-1936) are a comprehensive reworking of an earlier, 17th century hymn by John Bunyan (1628-1688), the author of The Pilgrim’s Progress.

John Julian’s great Dictionary of Hymnody, revised in 1907, mentions Bunyan only to say that he did not write any hymns. This is Bunyan’s only known hymn and was first published in 1684 in Part 2 of The Pilgrim’s Progress. It recalls the words of Hebrews 11: 13: “... and confessed that they were strangers and pilgrims on the earth.”

Bunyan’s words were modified extensively by Percy Dearmer for The English Hymnal (1906), with a new tune composed by Vaughan Williams, who used a traditional Sussex melody, ‘Monk’s Gate.’

This popular hymn tune is in 65 65 66 65, and it is the tune rather than the words that have made this hymn so memorable Edward Darling and Donald Davison, in their Companion to Church Hymnal, say it provides “a fine example of the use of syncopation and cross-rhythm in a hymn tune.”.

Monk’s Gate is a hamlet in West Sussex, on the A281, 4.3 km south-east of Horsham. It was there in December 1904 that Vaughan Williams first heard the tune when he heard Harriet Verrall of Monk’s Gate singing the English folksong ‘Our Captain Calls All Hands.’ Harriet and Peter Verrall, who lived at Thrift Cottage, were also responsible for teaching Vaughan Williams the ‘Sussex Carol’ (‘On Christmas Night all Christians sing’) and the tune known as Sussex (‘Father, hear the prayer we offer’).

The song ‘Our Captain Calls All Hands’ tells of a woman deserted by her sailor lover:

How can you go abroad
fighting for strangers?
Why don’t you stay at home
free from all danger?
I will roll you in my arms,
my own dearest jewel,
So stay at home with me, love,
and don’t be cruel.

Vaughan Williams’s tune was published in the first edition of the English Hymnal in 1906.

Three years later, he heard the same tune being sung at Westhope, near Weobley, Herefordshire, by Ellen Powell with a folk song called ‘A Blacksmith Courted Me.’ This song has the same theme of love deserted:

A blacksmith courted me
Nine months and better
He fairly won my heart
Wrote me a letter.
With his hammer in his hand
He looked so clever
And if I was with my love
I would live forever …

Oh, witness have I none
Save God Almighty
And may he reward you well
For the slighting of me.
Her lips grew pale and wan
It made a poor heart tremble
To think she loved a one
And he proved deceitful …

This second song has been recorded by many of the folk rock bands that emerged from the late 1960s on. Steeleye Span lead off their first two studio albums Hark! The Village Wait (1970) and Please to See the King (1971) with different versions of the song as well as on several live albums. Planxty sing it on their first album Planxty (1973), and Pentangle on the album So Early in the Spring (1989). Maddy Prior of Steeleye Span also sings an a cappella version on her solo album Year (1993).

In the early 1970s, I was enjoying the music of English folk rock bands such as Steeleye Span, Pentangle, Fairport Convention, Lindsifarne and Jethro Thull. Their music provided an interesting bridge to the music of Vaughan Williams, which I was introduced to in rural Shropshire.

The adaptation of Monk’s Gate by Vaughan Williams brought new attention to Bunyan’s much-forgotten poem, which was hidden in the second part of The Pilgrim’s Progress. But the words sung to Monk’s Gate are no longer those penned by Bunyan, whose poem begins:

Who would true valour see,
Let him come hither;
One here will constant be,
Come wind, come weather.

The version in the English Hymnal is the one rewritten by Percy Dearmer and begins:

He who would valiant be
’Gainst all disaster,
Let him in constancy
Follow the Master.

The Master, of course, is Christ, and Dearmer also introduced explicit references to the Lord and the Spirit, making a Trinitarian hymn of a poem that was written as an allegory and with lyrics that are only metaphorically Christian. But Dearmer also cut out Bunyan’s references to a lion, a hobgoblin and foul fiend.

Bunyan’s original was not commonly sung in churches, perhaps because of the references to “hobgoblin” and “foul fiend.” Some recent hymnbooks have returned to Bunyan’s original, including the Church of England’s Common Praise and the Church of Scotland’s Hymns of Glory, Songs of Praise, and it has been popular with English folk rock artists such as Maddy Prior and the Carnival Band.

The two versions of the hymn are included in the Irish Church Hymnal (No 662), which also uses the tune Monk’s Gate for Herbert O’Driscoll’s hymn ‘Who are we who stand and sing?’ (No 532).

‘To Be a Pilgrim’ is the school hymn for many schools throughout England, and is sung in several school films. In Lindsay Anderson’s film if.... (1968), it characterises the traditional religious education in English public schools in the 1960s. It is also sung again in a public school context in Clockwise (1986), starring John Cleese, who directs all of the members of the Headmasters’ Conference to stand and sing the hymn, as he often would to his own pupils.

This was one of the hymns chosen by Margaret Thatcher for her funeral two years ago in April 2013. But the hymn was also one of Tony Benn’s choices on BBC Radio 4’s Desert Island Discs.

The hymn’s refrain “to be a pilgrim” has entered common usage in the English language and has been used in the title of many books about pilgrimage.

From his childhood, Vaughan Williams had been attracted to the sturdy and simple prose of John Bunyan, with its sincerity and spiritual intensity. Vaughan Williams described his Pilgrim’s Progress as a ‘Morality’ rather than an opera, although he intended the work to be performed on stage rather than in a church or cathedral.

He who would valiant be

He who would valiant be
’Gainst all disaster,
Let him in constancy
Follow the Master.
There’s no discouragement
Shall make him once relent
His first avowed intent
To be a pilgrim.

Who so beset him round
With dismal stories
Do but themselves confound –
His strength the more is.
No foes shall stay his might;
Though he with giants fight,
He will make good his right
To be a pilgrim.

Since, Lord, thou dost defend
Us with thy Spirit,
We know we at the end,
Shall life inherit.
Then fancies flee away!
I’ll fear not what men say,
I’ll labour night and day
To be a pilgrim.

Tomorrow: ‘The Song of the Tree of Life’