Through Lent with Vaughan Williams
(4): ‘Jerusalem, thou City blest’ 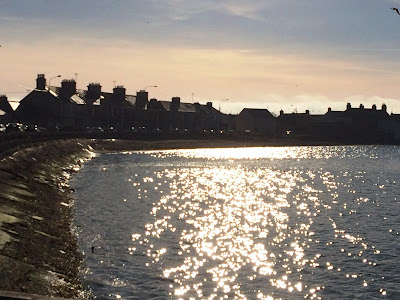 ‘No sun, in all his radiance bright, / Thy glory could reflect’ … sunset at Skerries Harbour last week (Photograph: Patrick Comerford, 2015)

For my reflections and devotions during Lent this year, each day I am reflecting to reflecting on and invite you to listen to a piece of music or a hymn set to a tune by the great English composer, Ralph Vaughan Williams (1872-1958).

The English Hymnal (1906) was edited by Percy Dearmer and Vaughan Williams, and was seen as the musical companion to Dearmer’s practical guide to liturgy, The Parson’s Handbook.
‘The music is intended to be essentially congregational in character …’ Caughan Williams said in the opening words of his preface. The high quality of the music is due largely to his work as musical editor. The standard of the arrangements and original compositions made it one of the most influential hymnals of the last century. The hymnal included the first printing of several arrangements and hymn settings by Vaughan Williams.

Today’s hymn is particularly recommended for holy days, and verse 6 is suitable for a saint’s day.