Lines of lions ... a row of encaustic tiles in the south aisle, Christ Cathedral, Dublin, each with an image of rampant lion (Photograph: Patrick Comerford, 2015)

Holy Week has been a busy culmination to Lent this year. I have been in Christ Church Cathedral regularly though the week, taking part in the Palm Sunday Eucharist [29 March 2015], the Chrism Eucharist on Maundy Thursday [2 April 2015], and last night’s Easter Eve Eucharist, when I assisted at the administration of the Holy Communion.

I also presided at the Maundy Eucharist in All Saints’ Church, Grangegorman, and led the ‘Seven Last Words’ service there on Good Friday [3 April 2015]. On one day this past week, I was at four services in three different places. I am back in Christ Church Cathedral this morning [5 April 2015] for the Easter Eucharist. 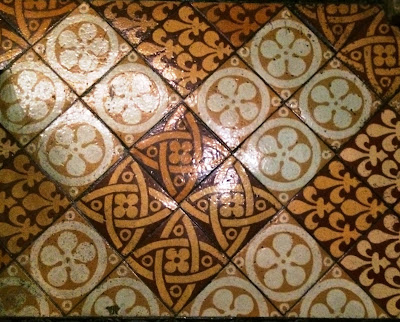 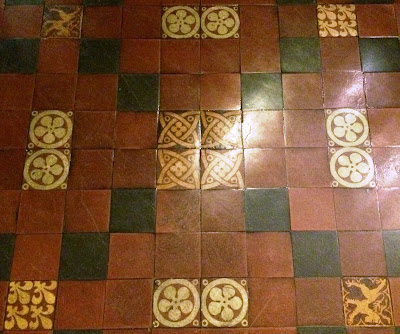 White cinquefoils in the sanctuary (above) and the south ambulatory (below), in Christ Church Cathedral … are they a play on the White Rose of the House of York? (Photographs: Patrick Comerford, 2015)

Twice during the past week, I noticed two rows of tiles, almost hidden in the north and south sides of the sanctuary, each with five white cinquefoils or roses. The only other place this design or theme appears is one part of the south ambulatory.

Prompted by the recent funeral of Richard III in Leicester Cathedral 10 days ago [26 March 2015], I wondered whether these Victorian tiles are a humorous play on a Yorkist theme associated with the cathedral: the 10-year-old Yorkist pretender Lambert Simnel was crowned in Christ Church Cathedral as King Edward VI on 24 May 1487.

The story of that coronation is told by Dr John Ashdown-Hill in The Dublin King, which was launched in Christ Church Cathedral about two months ago [12 February 2015]. He was one of the team that discovered Richard III’s body in a car park in Leicester three years ago [August 2012], and in this new book he explores the story Lambert Simnel.

However, he refuses to use the name Lambert Simnel for the Dublin King and believes there is convincing evidence that he was the legitimate Yorkist heir to the throne of Richard III. He suggests that he was neither Lambert Simnel nor one of the ‘Princes in the Tower’ but perhaps Edward Plantagenet, Earl of Warwick and son of George, Duke of Clarence, the brother of Richard III.

It would be interesting to explore the story behind those ‘York Rose’ tiles in the sanctuary and the south ambulatory, but there are no references to them in Joanna Wren’s delightful little book, Floor Tiles, a guide to the medieval and 19th century floor tiles of Christ Church Cathedral, Dublin.

Because of their almost-hidden location, these 19th century ‘York Rose’ tiles receive little attention. Instead, the tiles that catch the imaginations of most visitors are those with the circular panels decorated with the paired pilgrim foxes, representing the mediaeval friars of the cathedral, and the geometric and floral designs. 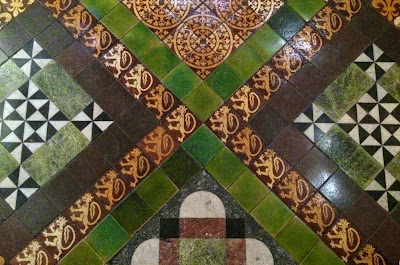 Lions in the sanctuary ... encaustic tiles by Craven Dunnill on the south side of the High Altar in Christ Church Cathedral, Dublin (Photograph: Patrick Comerford, 2015)

The majority of the floor tiles are 19th century copies of mediaeval floor tiles found during restoration of Christ Church by George Edmund Street in the 1870s. They were made by Craven Dunnill and Co of Shropshire, who also worked on commissions for Chester Cathedral and Bangor Cathedral in Wales.

The manufacture and use of encaustic tiles like these was an integral part of a revival of Gothic architecture and art, particularly where the design of a cathedral or church was inspired or influenced by AWN Pugin (1812-1852).

Joanna Wren discusses many of the patterns and designs in the tiles made by Craven Dunnill, and how most of the Victorian tiles are copies of mediaeval ones, some of them are original designs.

She points out that both the lion and fleur-de-lis designs were “probably taken from heraldry. They were used on the tiles simply as decoration, however, without any special meaning.”

However, it seems to me that the lions rampant, which can be seen on tiles throughout the cathedral, particularly on the south side of the high altar, are not based on designs found in the cathedral’s mediaeval tiles during Street’s restoration, but on a design that was introduced or reintroduced by Pugin in the early 19th century. 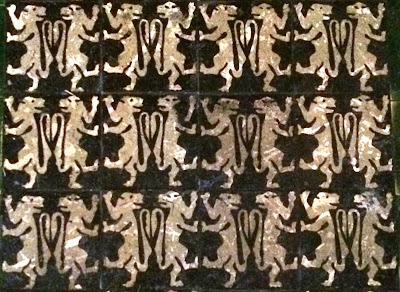 Pugin made drawings for tiles during his many journeys on the night train from London to Staffordshire while he was engaged in restoring and rebuilding Alton Towers. The lion rampant, rather than the talbot, was the primary heraldic symbol of the Talbot family, Earls of Shrewsbury and proprietors of Alton Towers.

The tiles Pugin designed were manufactured by Minton & Co of Stoke-on-Trent in north Staffordshire ca 1842-1844. In the 1840s, Pugin developed a creative partnership with Herbert Minton (1793-1858), a pottery manufacturer in Stoke-on-Trent.

The early products by Thomas Minton (1765-1836) were standard domestic tableware in blue transfer printed or painted earthenware, including the Willow pattern. His son Herbert developed the process of making encaustic tiles, and together Minton and Pugin went beyond a mere revival of mediaeval patterns to develop finely-finished multi-coloured tiles with intricate designs and with a higher degree of accuracy than anything produced in the Middle Ages. 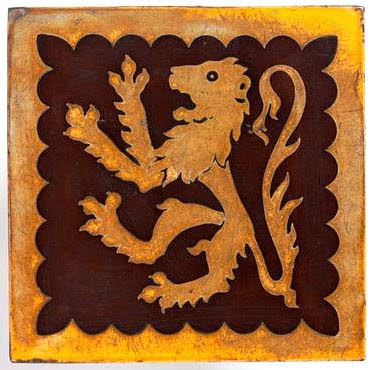 The Alton Towers tiles were made for Pugin by Minton in Staffordshire 30 years – a whole generation – before Craven and Dunnill made the Christ Church tiles for Street (Photograph: Victoria and Albert Museum)

An interesting example of these Pugin-designed, Minton-manufactured tiles with a symbol of a lion rampant is seen in a red earthenware tile with inlaid decoration that is now in the Victoria and Albert Museum, London.

The Alton Towers tiles were made for Pugin by Minton in Staffordshire 30 years – a whole generation – before Craven Dunnill made the Christ Church tiles for Street.

Pugin’s working relationship with Herbert Minton resulted in the designing and making of some the best church tiles of the Victorian era. He was using Minton tiles as early as 1840 for the Hardman’s Hospital Chapel in Birmingham. By 1844, Minton was making more colourful encaustics probably at Pugin’s instigation. 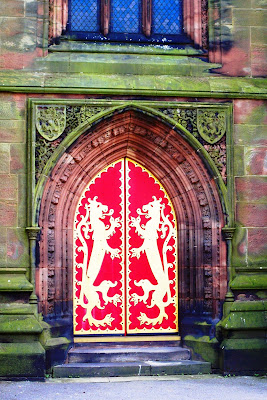 One of Pugin’s greatest achievements in the design and use of colourful church tiles can be found at Saint Giles in Cheadle, built for Lord Shrewsbury and opened in 1846. Michael Fisher, in his book on Saint Giles’, describes it as “Perfect Cheadle.”

The polychromatic effects of the encaustic floor tiles in Cheadle blend perfectly with the colourful wall and ceiling decorations and the stained glass windows.

Minton went on to supply tiles to other architects working in the Gothic Revival style, and so encaustic tiles are often known as Pugin tiles, irrespective of who their designer is.

The fine Minton tiles in the choir in Lichfield Cathedral were inspired by the medieval ones found in the choir foundations and still seen in the Cathedral Library.

Today, more than half the churches in Britain are paved at least in part with 19th century decorative encaustic tiles and they are often the most notable features in a church. 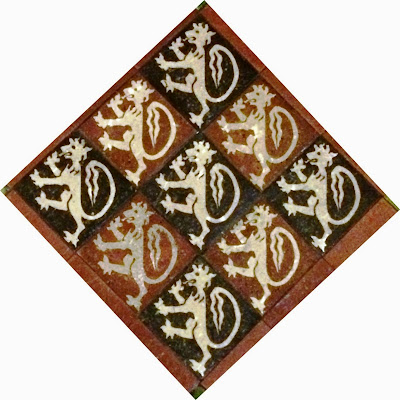 Many visitors to Christ Church Cathedral, Dublin, ask whether the rampant lion is a symbol of the English royal family; few realise that was a heraldic symbol of the Talbot family, and that through Pugin’s influence it became a popular and unquestioned heraldic theme in the encaustic tiles made for many Gothic revival churches throughout these islands from the mid-19th century on. 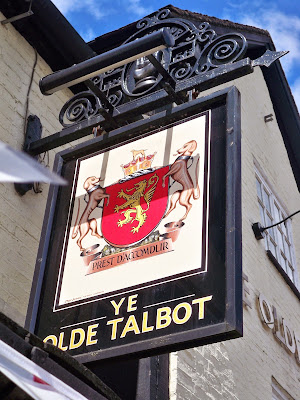