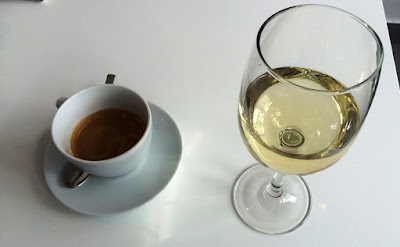 A glass of Falanghina and a double espresso in Carpe Diem in Bray this afternoon (Photograph: Patrick Comerford, 2015)

There is a sense of declining or decaying Victorian elegance, if not grandeur, about the seafront in Bray and the streets leading off it.

I had gone for a walk on the beach in the early afternoon, but the breeze and the grey clouds combined as a deterrence, and instead I walked along the promenade and noticed the fading feeling about many of the Victorian terraces than most have once been fashionable, but later became small hotels and boarding houses, pubs and amusement centres.

Later, in turn, they became nursing homes, and it is only in recent years that some of these houses along the Esplanade have started returning to the single-family residences that their architects originally envisioned.

But the fading Victorian images remain: terraces painted in ice-cream pink and white; street names like Fitzwilliam, Herbert and Albert that are reminders of old estates and the Prince Consort rather than EastEnders; candy-striped kiosks that are now selling espresso as well as beach accessories; bandstands and sheltered seating.

If Dalkey and Killiney have their Vico Road and Sorrento Terrace to create images of the Bay of Naples, then Bray has its Florence Road and Palermo to stir up tastes of Italy too.

But Bray also has an authentic taste of Italy with places like Gino’s Gelato, which has been serving Italian ice cream on the seafront for three generations.

However, the real taste of Italy in Bray is to be found in the cafés and restaurants – places such as Gusto Italiano on Goldsmith Terrace, Campo de’ Fiori Restaurant and Risto Market, and, of course, Carpe Diem. 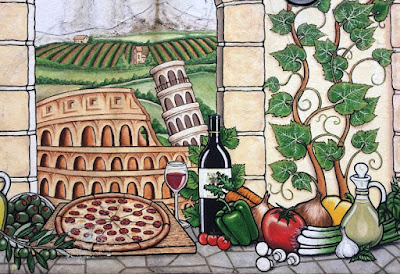 I cannot be enthusiastic enough in recommending Carpe Diem, where is a real Italian atmosphere – it is small, loud and cramped, but the welcome is cheeky, warm and friendly, the food is prepared before your eyes, the wine is recommended on a chalked blackboard and served by the glass, and the double espressos have a true Italian kick to them.

I had a with a salad made up of goat’s cheese, basil, baby spinach, aubergine, courgette, black olive tapenade, and Italian bread drizzled with olive oil. My friend had Bruschettone, which was extra large bruschetta, with vine cherry tomato, smoked salmon, avocado and rocket salad.

I also had a glass Falanghina, a white wine with character from Sicily. Falanghina – also called Falanghina Greco, is made from an ancient grape variety that may have provided a basis for the classical Falernian wine, the most renowned wine produced in ancient Rome. The name for the wine appears to derive from the Latin falangae, or stakes for supporting the grapes in a vineyard. 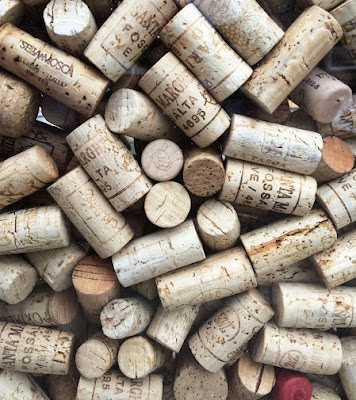 How many coins to drink a glass of the best wine? (Photograph: Patrick Comerford, 2015)

A price list on the wall of a former bar in the ruins of Pomeii notes:

The Roman poet Catullus extolled the virtues of Falernian, and writers such as Pliny the Elder and Horace regarded this particular wine as supreme above all others.

Edward Kennard Rand, in his book Founders of the Middle Ages (1928), writes in a chapter on ‘The Church and Pagan Culture’:

For the moment, I will take as type and symbol a bit of the Eucharistic liturgy of the Church preserved in one of its most ancient monuments, the Missale Gothicum. In the benedictio populi in the Mass for the eve of the Epiphany, Christ is besought to turn dull hearts to him, just as at the wedding of Cana he converted plain water into – not just wine, but Falernian. Horace’s best! Let this be a symbol of the history of Christian humanism. Though the stricter souls have denounced it and even threatened to break it, that jar of old Falernian has always reposed in the sanctuary of the Church.

We both finished off with double espressos, before going for a walk along the promenade, savouring the sea breeze and admiring the decaying Victorian elegance of the seafront houses. 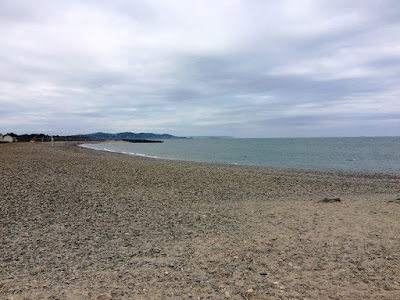 Walking along the seafront in Bray late this afternoon (Photograph: Patrick Comerford, 2015)

Posted by Patrick Comerford at 18:36