A note on this evening’s Eucharist
and the Easter hymns 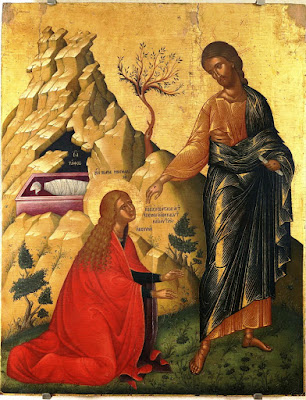 I am presiding at the Community Eucharist in the Chapel of the Church of Ireland Theological Institute later this evening [30 March 2016]. This is our first Easter celebration of the Eucharist, and the Readings, Collect, Proper and Post-Communion Prayer of Easter Day, the First Sunday of Easter.

The preacher this evening is the Senior Student Stuart Moles.

These photographs and this note are included in this evening’s booklet:

A note on this evening’s Eucharist and the Easter hymns:

This evening’s readings, collect, preface and post-Communion prayer are those for Easter Day, the First Sunday of Easter. Our opening hymn and the Gloria are from the new Thanks & Praise.

Processional Hymn: ‘See, what a morning, gloriously bright’ (Thanks & Praise, 125) was written by Stuart Townend and Keith Getty as a song to sing on Easter morning or at the beginning of a time of worship, with a triumphant melody for the Resurrection story. They wanted to convey the immediacy of the Easter morning experience, and how that morning changed history forever. The third verse was a response of praise as the writers realised the consequence of Christ’s resurrection for our lives, drawing us into a relationship with the triune God.

Gradual: ‘Jesus Christ is risen today’ (Church Hymnal, 271), Surrexit Christus Hodie, is a traditional Latin Easter carol dating from the 14th century, and has been altered and adapted over the centuries. It was introduced to Anglican hymnody in the 18th century, and remains one of the most popular hymns at Easter time.

Post Communion Hymn: ‘Thine be the glory, risen, conquering Son’ (Church Hymnal, 288) was written by a Swiss pastor, the Revd Edmond Louis Budry (1854-1932), who was inspired to write this hymn in 1884 after the death of his wife Marie. Each stanza alludes to a different part of the Resurrection story: 1, the angels rolling away the stone; 2, Christ’s appearance to the women running away from the tomb; 3, Christ dispels the Apostle Thomas’s doubts. The hymn was translated by the Revd Roland Birch Hoyle (1875-1939), and became popular through its early use by the YMCA, the Student Christian Movement and the World Council of Churches. The tune is by George Frideric Handel (1685-1759) and is adapted from a chorus in his oratorio Judas Maccabaeus.

Almighty God,
through your only-begotten Son Jesus Christ
you have overcome death
and opened to us the gate of everlasting life:
Grant that, as by your grace going before us
you put into our minds good desires,
so by your continual help we may bring them to good effect;
through Jesus Christ our risen Lord
who is alive and reigns with you and the Holy Spirit,
one God, now and for ever. Amen.

Living God,
for our redemption you gave your only-begotten Son
to the death of the cross,
and by his glorious resurrection
you have delivered us from the power of our enemy.
Grant us so to die daily unto sin,
that we may evermore live with him in the joy of his risen life;
through Jesus Christ our Lord. Amen.

God the Father,
by whose glory Christ was raised from the dead,
raise you up to walk with him in the newness of his risen life:
and the blessing of God Almighty,
the Father, the Son, and the Holy Spirit,
be among you and remain with you always. Amen. 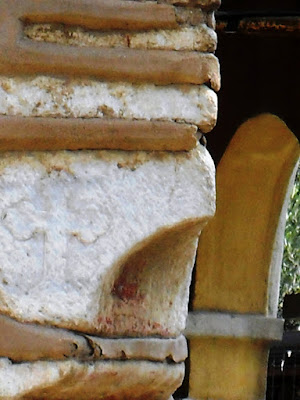 ‘The same stone which the builders rejected has become the chief corner-stone’ (Psalm 118: 22) ... a cross cut into a cornerstone in the main church in the Monastery of Vlatádon in Thessaloniki (Photograph: Patrick Comerford)