Finding a secluded and secret
garden in a former monastery 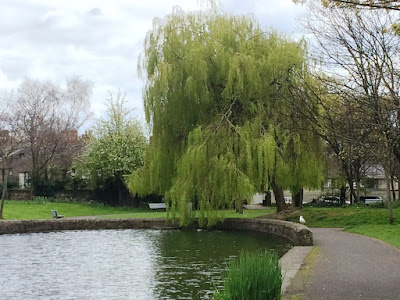 In Ranelagh Gardens … a secluded and secret garden in Dublin 6 (Photograph: Patrick Comerford, 2016)

On my way from Dundrum to the Greek Film Festival in the City Centre on Sunday morning, after preaching in Christ Church, Taney, and Saint Nahi’s Church, Dundrum, I found myself for the first time in the Ranelagh Gardens.

These secluded gardens are like a secret garden in the middle of the south-side Dublin suburb to which they gave their name. And, although I have often passed them by on foot or travelled by them on the Luas, I had never visited them.

I have known this part of Dublin for decades, and both a grandfather and great-grandfather lived nearby in Beechwood Avenue and Old Mountpleasant. But in my late teens and early 20s this secret garden was a secluded and private place, part of the grounds of a monastery of enclosed Carmelite nuns, and closed to the public for over a century. 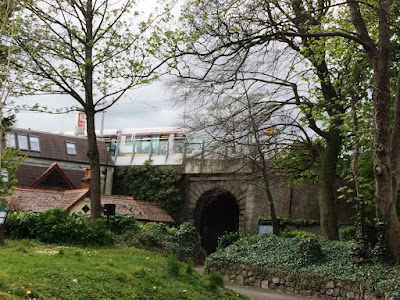 The main entrance to the Ranelagh Gardens is through a stone arch beneath the Luas line (Photograph: Patrick Comerford, 2016)

The main entrance to the Ranelagh Gardens is through a spectacular stone and carved arch beneath the Luas or light rail line, but there are less well-known gates from the side streets and laneways around Ranelagh.

The gardens now cover about one hectare (almost 2.5 acres), but were originally part of five hectares of pleasure gardens developed in 1775 by a businessman who called them after the Ranelagh Gardens beside the River Thames in London, beside the site that hosts the Chelsea Flower Show each year. 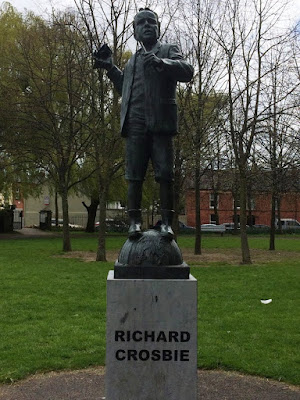 In 1788, the Ranelagh Gardens were sold to a community of Carmelite nuns who moved into Willsbrook House, set up a new monastery and opened a school. But when the Carmelite convent became totally enclosed in 1840.

The gardens gave their name to the surrounding area, which was originally a small village on the edges of Dublin, surrounded by landed estates. Ranelagh was incorporated into the expanding city in the 19th century. But by then the Ranelagh Gardens were closed to the public, local people no longer had access to boating pond, and the Ranelagh Gardens were virtually forgotten for over a century.

The Carmelite nuns moved out of Ranelagh in 1975, and found a new home in Malahide. A lot of the land was sold off for housing developments in the mid-1980s.

Today, the Dublin 6 district has many open parks and green spaces, including Dartmouth Square, Mount Pleasant Square, Belgrave Square, Kenilworth Square and the park in Harold’s Cross. But none is as curious or as secluded as the Ranelagh Gardens.

But all was not lost. The present small park was designed, including an ornamental pool thereby that recalls the 200-year historical connection with the original Ranelagh Gardens.

A large, gated and carved stone arch beneath the Luas or light rail line leads into this “secret garden.” But in reality this is no secret garden – it is overlooked by surrounding apartment blocks, so that, like any city parks, this place feels both open and enclosed all at once.

Inside there is an ornamental pond with swans, ducks and large fish, benches to snatch some moments of tranquillity, weeping willows, a family of herons who are unperturbed by the human visitors, and a statue commemorating Richard Crosbie and his pioneering hot-air balloon flight. 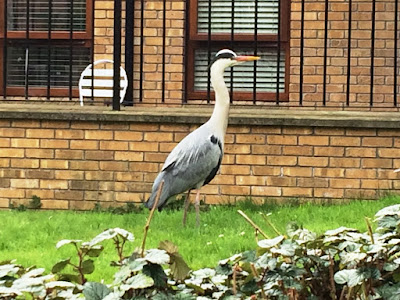 A heron in the Ranelagh Gardens … undisturbed by human attention (Photograph: Patrick Comerford, 2016)

The Ranelagh Gardens in London were named after Ranelagh House. The title of Viscount Ranelagh in the Irish Peerage was first given in 1628 for Sir Roger Jones, son of Archbishop Thomas Jones of Dublin. His grandson, Richard Jones (1641-1712), the 3rd Viscount, became Earl of Ranelagh in 1677.

While he was the Treasurer of Chelsea Hospital in London (1685-1702), this Lord Ranelagh built Ranelagh House in 1688-1689 immediately beside the Chelsea Hospital. The builder, Solomon Rieti, was an Italian Jewish immigrant whose niece, Rebecca Rieti, was the grandmother of Benjamin Disraeli.

The Earl of Ranelagh’s mother was Lady Katherine Boyle, a daughter of the Earl of Cork and a sister of the chemist Robert Boyle. But she became estranged from her husband, who appears to have been a drunkard, and Richard was brought up in his mother’s household in London.

After the Restoration of Charles II, Richard became MP in the Irish Parliament for Roscommon, and at first he was identified with the group that opposed the land settlement being proposed by Ormond. But, when he became the Irish Chancellor of the Exchequer he became one of Ormonde’s strongest supporters. For his role in clearing Crown debts, he also became the Earl of Ranelagh.

In England, he was also the MP for Plymouth and later for Newtown (Isle of Wight), Chichester, Marlborough and West Looe. He became Paymaster of the Forces. He remained in royal favour during the reign of James II, but he switched his loyalties when William and Mary came to the throne and became a senior figure in the new government.

Ranelagh was well known for enjoying life and for being a rake. Fall seemed inevitable, and he was expelled from the House of Commons in 1703 when discrepancies were found in his accounts and he was fund to have misappropriated more than £900,000 of public finds.

When he died in 1712 without a legitimate male heir, the title of Earl of Ranelagh became extinct and the title of Viscount Ranelagh became dormant. Eventually, Ranelagh House and the Ranelagh Gardens were sold in 1741 to a syndicate led by the proprietor of the Theatre Royal, Drury Lane, and Sir Thomas Robinson MP, and the Gardens opened to the public the following year.

Ranelegh became more fashionable than the older Vauxhall Gardens. The entrance charge was 2/6 (half a crown), compared to a shilling at Vauxhall. Soon after the gardens opened, Horace Walpole wrote: “It has totally beat Vauxhall... You can’t set your foot without treading on a Prince, or Duke of Cumberland.”

The name Ranelagh Gardens inspired the Dublin counterpart and soon gave name to the new suburb in Dubin. But the success was short-lived, Ranelagh House was demolished in 1805, 35 years before the Ranelagh Gardens in Dublin were closed off to the general public.

Today, the original site in London is now a green pleasure ground with shaded walks, part of the grounds of Chelsea Hospital and the site of the annual Chelsea Flower Show.

Learning more about my former neighborhood.