Who is being heard as a voice
for the voiceless this weekend? 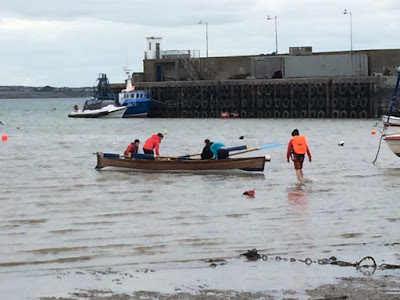 Preparing to row out into the distance in Skerries Harbour this afternoon (Photograph: Patrick Comerford, 2016)

So often in Christianity and in the Church we talk about the call to being a voice for the voiceless. We use the phrase when we speak up for the oppressed and against the oppressor. We speak of it as a Biblical mandate, although the phrase appears in only a limited number of translations of the Book of Proverbs.

However, I almost felt I needed another person as my voice this morning.

It has been a busy working weekend that has been like a full working week. Since Friday afternoon, I have been involved in reconciling journal marks, taking part in Evening Prayer, organising a tutorial group, delivering a major conference paper, discussing student appraisals, leading a seminar on research ethics, supervising a dissertation, and lecturing on Celtic Spirituality … and all this before presiding at the Community Eucharist at the end of the residential weekend with students.

It could have been busier but for the fact that my old school’s dinner, planned for Friday night, was cancelled just a few days beforehand.

But by late last night I knew my voice was going.

I think my sarcoidosis has been flaring up in my lungs since my unhappy reaction to two medical procedures about ten days ago. By this morning, it was difficult to talk, and I thought I was going to be reduced to silence by the time it came to presiding at the Eucharist late this morning.

There was another priest colleague present, and she was preaching. There was no real imminent problem. But my voice held out, barely, until the end.

It is good for us as priests to be honest about our vulnerability. We do nothing relying on our own strength, we have no innate goodness that makes us different from anyone else. We are neither invulnerable nor infallible. And it is in accepting our weaknesses that we show we rely on the Risen Christ who has taken on all our brokenness. 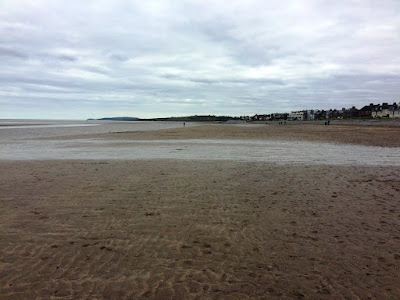 Walking on the beach in Skerries this afternoon (Photograph: Patrick Comerford, 2016)

This afternoon, two of us went to Skerries for a late lunch in Olive, where they still serve wonderful double espressos, before going for a walk on the South Strand, where the tide was out and the water-filled ripples in the sand were reflecting the light despite the cloud-filled skies above.

Later we walked along the harbour, where the only activity was a crew of four and a cox learning to row. They had waded out in the water to reach the boat, and as they rowed off into the distance I realised that I am not voiceless at all, fir there is much to thank God for.

And of course we exaggerate our own abilities when we talk about being voices for the voiceless.

Without saying much, but by being present and by listening to the marginalised and the oppressed, Pope Francis has been a true voice for the voiceless this weekend.

Posted by Patrick Comerford at 20:19