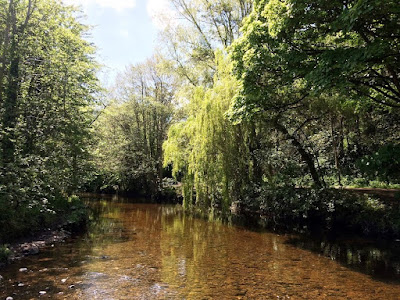 Willows by the banks of the River Dodder between Bushy Park and Rathfarnham Village (Photograph: Patrick Comerford, 2016)

After a long working week that has run into a long working weekend, I am sitting out in the garden, enjoying the afternoon sunshine, sipping a glass of white wine and listening to Inservi Deo, the latest CD recorded by Lichfield Cathedral Choir.

With the beautiful sunshine that has been beaming down in Dublin this weekend, I was delighted to walk most of the way home this afternoon [15 May 2016] after preaching at the Community Eucharist marking the Day of Pentecost and the end of another academic year for students on the part-time MTh course.

Along the banks of the River Dodder, between the footbridge linking the Ely Arch and the High School and the weir below the bridge at Rathfarnham Road, I continued meeting Sunday strollers from neighbouring churches, including Zion Parish Church and the Quaker meetings in Rathfarnham and Churchtown.

Here and there, I spotted a dozen trout. Close to the weir at Rathfarnham, a photographer showed me the photograph he had captured of a kingfisher who is nesting nearby. At times, I have seen kingfishers dart along the course of the Dodder, but I have never seen one sitting on a branch, nor have I ever managed to photograph one. 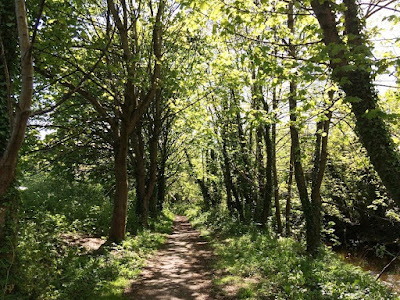 The trees forming green canopies and arches by the banks of the River Dodder (Photograph: Patrick Comerford, 2016)

I crossed Rathfarnham Road, and continued along the banks of the river, enjoying the green canopies that are now covering the pathways, the sound of the babbling river, and the willows trailing their branches in the water.

Close to Rathfarnham Shopping Centre, a stately heron was standing alone and aloof in the water, keenly watching for fish and unfazed by passing walkers with their dogs on the river bank above him.

The pathway at one point was impassable with brackish water that had either collected from recent rains or that was there from a leaking pipe. I decided not to investigate, and continued on instead through Templeogue Village.

There was no opportunity this week for a walk along a beach or a seashore. But on my way to work every morning in recent weeks I have been imagining and looking forward to a walk along this stretch of the Dodder below Rathfarnham. Perhaps the long-hoped-for summer is going to offer promises of more walks such as today’s. 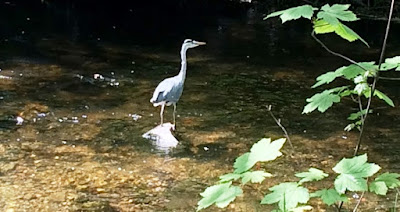 A heron in the waters of the River Dodder, below Rathfarnham Village (Photograph: Patrick Comerford, 2016)

Very evocative . Makes want to get on my bike tomorrow and walk along the river.
The sunshine glissing on the water is magical. The light like the Holy Spirit dancing!