Warm welcomes in the mountain
villages above Chersónisos

Piskopianó can be as pretty as any blue-and-white picture postcard from Santorini or Mykonos (Photograph: Patrick Comerford, 2016)

For four years, one after the other, I spent family holidays in the 1990s in the small village of Piskopianó in the mountains above Chersónisos on the north coast of Crete, and I have returned to the area twice for holidays in the neighbouring mountain village of Koutouloufári in 2000 and 2010.

In the past, Chersónisos had a brash or “young and lively” reputation, but tourism has dropped noticeably in Crete this year and Chersónisos seems to be much quieter this year.

Two of us decided to pay a return visit to both Piskopianó and Koutouloufári this year. It was a long journey from Rethymnon, involving two taxis and two buses, with a changeover at Chersónisos, but it was all made worthwhile with the warm welcome we received from old friends after an absence of six years.

We strolled through these two villages for an hour or two, visiting the church in Piskopianó, recalling meals we have had in restaurants and tavernas – some have expanded, others have closed, and it was a surprise to see that some of the supermarkets have closed too, as have some of the old apartment blocks and places offering rooms and accommodation.

Piskopianó is about 2 km south of Chersónisos, on the side of Xarakas Mountain, and it still remains primarily a traditional settlement, with many of the villagers involved in farming or tending olive groves.

The narrow side streets and alleys of Piskopianó, with their whitewashed houses and painted doors and windows, are still as pretty as any blue-and-white picture postcard from Santorini or Mykonos. Some of the stone houses date back to Turkish or even Venetian times, and all along the way there panoramic views out across the olive groves and the coast below, out to the blue seas of the Mediterranean. 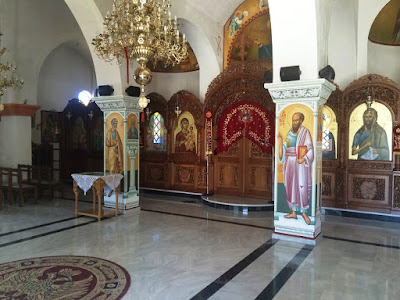 The new church in Piskopianó is exceptionally wide, with a noticeably lengthy iconostasis (Photograph: Patrick Comerford, 2016)

We went to visit the old 19th century parish church in Piskopianó, with its doom fresco on the west wall, but could only gain access to the recently-built Church of the Transfiguration. The new church, which is exceptionally wide, has a noticeably lengthy iconostasis or icon screen.

We never got to see the early Christian basilica in Piskopianó that archaeologists have identified. The church measures 45 x 20 metres and had three naves. Coins found on the site indicate that the church was built in the second half of the seventh century. But it was plundered in the past by local people and has remained largely unexcavated. 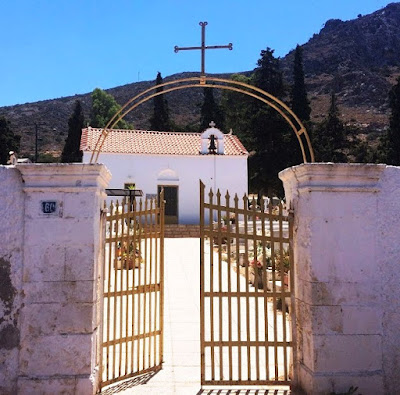 The old cemetery and funeral chapel are at No 60 (Photograph: Patrick Comerford, 2016)

We passed the old cemetery and funeral chapel, which has its own street number – and joked lightly about how for so many their number was up. 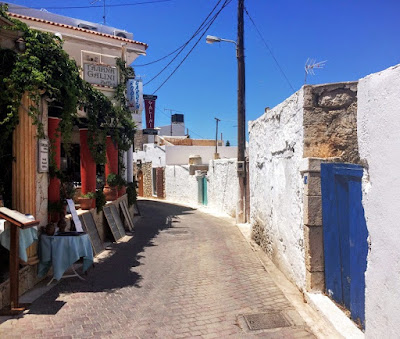 Neighbouring Koutouloufári is also a traditional Cretan mountain village, with its paved streets and traditional buildings and architecture, along with the expected tavernas and accommodation facilities.

The panoramic views from the roof garden in Lichnos in Piskopianó (Photograph: Patrick Comerford, 2016)

Back in Piskopianó, we had lunch in Lichnos, with its panoramic views across the olive groves and out to the sea. There was a warm welcome from Yiannis and his family, although it is six years since we last dined there. The conversation soon turned to mutual Greek and Irish friends, but we also heard the sad news about families who had moved away and old friends who had died since our last visit.

In Mika Villas, once a popular destination for “young and lively” Irish tourists, it was great to spend time with our friends from the Chrysakis family. We have been friends for almost 30 years, and have managed to meet up in Iraklion in recent years when we did not manage to make it as far as Piskopianó.

The seafront and old harbour in Chersónisos (Photograph: Patrick Comerford, 2016)

In the heat of the afternoon sun, I wondered whether the walk back down the hill from Piskopianó to Chersónisos would prove challenging, but instead we enjoyed the views of the olive groves by the side of the road and the mountains up behind us.

We strolled through the streets lined with bars, restaurants and souvenir shops – and fur shops that have signs only in Russian –down to the sea front and the seafront lined with restaurants small beach.

The Rough Guide to Crete describes Chersónisos as “a brash, sprawling and rather seedy place catering to mainly Dutch, Irish and Italian package tourists, replete with all the trappings of mass tourism. If you’re looking for tranquillity and Cretan tradition, forget …”

Despite its reputation, strolling past the Irish bars and the seafront restaurants on Odhos Venizelou, we still found glimpses of the interesting historical and cultural past of Chersónisos (Χερσόνησος, “peninsula”), with its peninsula and harbour. 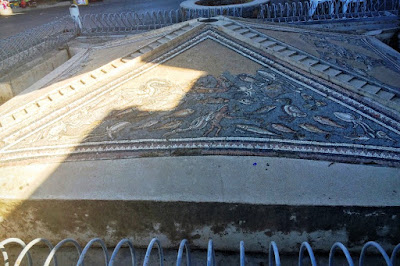 The nymphaeum is part of the Roman archaeological remains in Chersónisos (Photograph: Patrick Comerford, 2016)

The Roman archaeological remains in Chersónisos include the nymphaeum and parts of the old Roman harbour.

The nymphaeum is fenced off from the bars and tourists in a “pedestrian” island in the middle of this esplanade. It is shaped like a pyramid, with four sloping sides, separated by tiny ‘staircases,’ and each side is decorated with broken mosaics depicting marine scenes.

In Roman times, water came from the top and flowed over the ‘staircases’ and the mosaics. One side of the mosaics has been preserved well. It depicts the sea with fishes, a goose, a duck, a boat with a man who is rowing and a man catching an octopus, and a fisherman with a blue hat.

Below us, the Roman harbour was once protected by three moles that formed a basin measuring 270 x 150 metres, with an entrance that was 90 metres wide. The moles were 5.20 to 5.30 metres wide and about a metre higher than the sea-level. Two of the three moles are now submerged for the most part, while the one surviving mole is covered by a modern mole. Along the moles were breakwaters that are still partly still visible in places, and there may have been a Roman lighthouse here too.

Chersónisos was a thriving port from Classical Greek to Byzantine times. But late that afternoon, the only traffic in the harbour was a ‘pirate ship,’ the Black Rose, returning from a noisy ‘booze cruise’ to Sissi further east.

We strolled back up through the town, realising too late in the afternoon that there were other archaeological sites and digs that we had yet to explore. On the bus back to Rethymnon we thought we might return. We knew warm welcomes would await us. 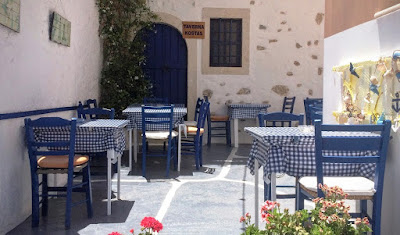 There is a warm welcome awaiting you in Piskopianó (Photograph: Patrick Comerford, 2016)