Luke 20: 27-38: seven brothers, a bride,
and some questions about eternal life 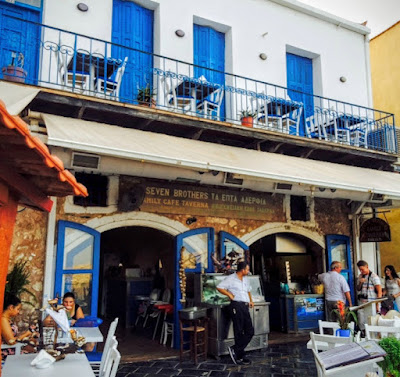 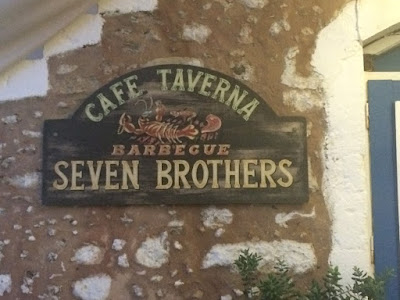 The sign at the Seven Brothers Taverna in the old Venetian harbour in Rethymnon on the Greek island of Crete (Photograph: Patrick Comerford, 2016)


This is the Gospel reading in the Revised Common Lectionary for the Sunday after next, the Third Sunday before Advent [Sunday 6 November 2016]. There is an old Hollywood musical, Seven Brides for Seven Brothers, starring Jane Powell and Howard Keel; there are any superstitions about the seventh son of a seventh son; I also know a restaurant in the old Venetian harbour in Rethymnon in Crete called ‘The Seven Brothers’ (Τα Επτά Αδέρφια).

But this reading about seven brothers and one bride is primarily a story about questions about the resurrection (for parallel readings see also Matthew 22: 23-33; Mark 12: 18-27). How does this relate to the approaching Advent theme?

1, Where do the events in this Gospel reading take place?

Last week (Luke 19: 1-10), we were in Jericho, where Christ dined with Zacchaeus. I spoke of how the pace of Saint Luke’s narrative was now being geared up, for Christ is on his way from Jericho to Jerusalem. We are being built up to anticipate the climax of the Gospel.

By this week, we are in Jerusalem. The closing verses of the chapter before this reading, which have been skipped over in the allocation of lectionary readings, tell us that by now Christ is teaching in the Temple every day (Luke 19: 47), and that the religious and secular authorities – the chief priests, the scribes and the leaders of the people – ‘kept looking for a way to kill him, but they did not find anything they could do …’ (Luke 19: 47-48).

2, Could you make connections with the widow who plays a prominent part at the beginning of the next chapter (Luke 21: 1-7)? Does it matter to this widow or to Christ who she was married to? Are those who are widowed easy prey? Surely this is not how they are to be seen in the Kingdom of God?

Looking at the reading:

Verse 27: The chief priests and the Temple leadership were mainly Sadducees, who regarded only the first five books of the Old Testament, the Pentateuch, as authoritative Scripture. Not finding any mention of life after death in these books, they rejected its existence. The apostles had a similar encounter with the Sadducees when they were preaching the Resurrection (see also Acts 4: 1-4), as did the Apostle Paul when he faced the council (see 23: 6-10).

Verses 28-33: The Sadducees, in an effort to trap Christ into speaking against the Law, ask him a question about levirate marriage. This is not about the marriage of Levites, but comes from the Latin word levir, meaning a brother-in-law. There was a sense in which a man was seen to live on in his son. So, if a man died without sons and heirs, his brother was required to marry his widow and give her a son, thus continuing the family line (See Deuteronomy 25: 5-10; see also Genesis 38: 8).

Verses 34-36: Luke makes the same point as Matthew and Mark, but in somewhat different language: human relations in the home do not exist in the same way beyond death. Christ distinguishes two ages and kinds of existence. Mortals are part of this age by the fact of physical birth, and of the age to come by resurrection verse 36; Romans 1: 4).

Verse 34: ‘This age’ (verse 34) is the current era; ‘that age’ (verses 35-36) is the era to come, when Christ returns. In God’s kingdom, marriage will no longer exist. Those who are admitted into eternal life for their faith (‘considered worthy of a place...,’ verse 35) will all be ‘children of God’ (verse 36). This will be their family relationship. They will be immortal (‘cannot die anymore’) and will be like ‘angels,’ who, in the time of Christ, were considered to be sexless.

Verses 37-38: Christ argues for life after death, and for the resurrection, from the Pentateuch, the very five books to which the Sadducees limited their understanding of what is Scripture. In the story of the Burning Bush, God tells Moses: ‘I am the God of your father, the God of Abraham …’ (see Exodus 3: 6). Because God says is (not was), Abraham is alive now. He died, so he must have been brought back to life, resurrected. God is truly ‘God … of the living’ (verse 38). God is not frustrated by physical death (verse 38).

1, How would you make connections with the other readings for this Sunday:

Haggai 1: 15b to 2: 9 – this too is a pre-Advent reading, with the promise of God’s future plans for heaven and earth being fulfilled. However, those who are using the paired readings will find the Old Testament reading (Job 19: 23-27a) makes more obvious connections with the Gospel reading: ‘For I know that my Redeemer lives, and that at the last he will stand upon the earth’ (verse 25).

Verse 39: Some scribes, who are believers in resurrection, are pleased with Jesus’ argument. Verse 40 says that the Sadducees ‘no longer dared to ask him [Christ] another question.’ Christ has evaded the trap that was set for him. What does this say about how we should deal with those who question and challenge the Christian faith?

3, The Gospel reading for the following Sunday (the Second Sunday before Advent, 13 November) is Luke 21: 5-19. Pointing out that the reading we have been looking at is located in the Temple may prepare people for the next Sunday’s reading.

4, Can you think of other Gospel parallels? How about the story of the Samaritan woman at the well? How does this reading compare with those stories in which Jesus uses the wedding banquet as an illustration of the Kingdom of God?

1, Death and November: How would you approach this reading in the context of next month, November, which is often associated with remembering the dead, including All Saints’ Day (1 November), All Souls’ Day (2 November), Remembrance Day (11 November) and Remembrance Sunday (13 November)?

2, What response to this reading might you expect from people in your parish who are widowed, or in difficult or broken marriages, or people who have never married? How would that shape and influence any sermon you write?

(Revd Canon Professor) Patrick Comerford is Lecturer in Anglicanism, Liturgy and Church History, the Church of Ireland Theological Institute. These notes were prepared for a Bible study in a tutorial group with MTh students on 26 October 2016.