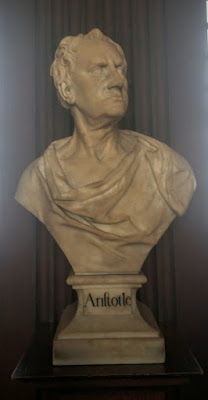 Aristotle … one of the original 14 busts by Peter Scheemakers in the Long Room in the Old Library in Trinity College Dublin (Photograph: Patrick Comerford, 2016)

The Long Room in the Old Library in Trinity College Dublin is lined with a collection of busts of thinkers. Sometimes, I imagine, visitors must wonder whether this is Ireland’s Pantheon.

At first sight, the heads lining the Long Room seem to be predominantly from the Classical past, including Homer, author of the Iliad and Odyssey., the philosophers of Athens, including Plato, Aristotle and Socrates, and great orators such as Cicero.

The Flemish-born sculptor Peter Scheemakers (1691-1781) was commissioned in 1743 to carve the first 14 figures for the library in 1743. He had already carved the bust of William Shakespeare for the Poets’ Corner of Westminster Abbey, and was commissioned when Claudius Gilbert left money in his will for busts of ‘men eminent for learning’ to adorn the Library in Trinity College Dublin. 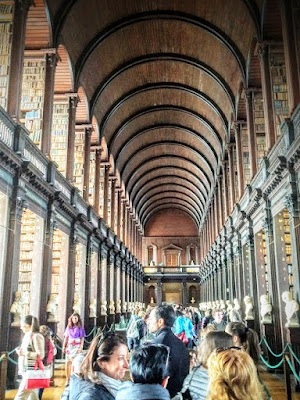 The busts of ‘men eminent for learning’ adorning the Long Room in the Old Library in Trinity College Dublin look like Ireland’s Pantheon (Photograph: Patrick Comerford, 2016)

Robert Boyle (1627-1691), who was born in Lismore Castle, was the father of modern chemistry, and was also a devout and pious Anglican noted for his writings in theology; he financed the printing of the Bible, both the Old and New Testaments, in Irish. James Ussher (1581-1651), Archbishop of Dublin, is famous and now ridiculed for calculating the time and date of the creation as around 6 p.m. on this day, 22 October 4004. Alone among the original 14 these two are Irish.

But since Scheemakers carved the first 14 busts, the collection has been added to, and the Irish faces now looking down on tourists and visitors alike and lining the long corridor of the Long Room include Robert Clayton (1695–1758), Bishop of Killala and Achonry, then Bishop of Cork and Ross, and finally Bishop of Clogher; at the time of his death, he was facing charges of heresy. 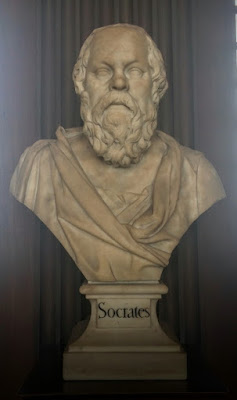 Socrates … one of the original 14 busts by Peter Scheemakers in the Long Room in the Old Library in Trinity College Dublin (Photograph: Patrick Comerford, 2016)

When I visited the Long Room earlier this month, I was challenged by the image of Aristotle. He looks more like a determined modern politician than a classical philosopher, and very unlike the statue of a more dignified, stately and philosophical Aristotle in the heart of Thessaloniki.

In Thessaloniki, Aristotelous is the central and most famous square, linked to the seafront through Nikis Avenue. The square was designed by the French architect Ernest Hébrard in 1918, and the 12 buildings that encircle Aristotelous Square have been listed buildings since 1950.

I have stayed here in the Electra Palace Hotel, and the square is also home to the Olympion Theatre cinema, the venue for the Thessaloniki Film Festival takes place, and many modern restaurants, cafés and bars, as well as street vendors and buskers. The square continues north as Aristotelous Street, a popular, pedestrianised, tree-lined street. 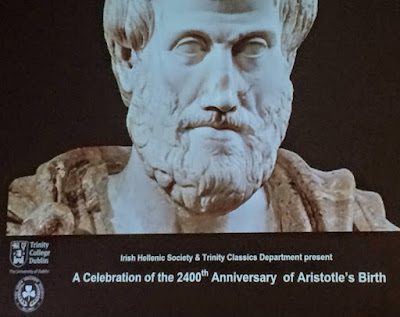 The poster for last night’s seminar marking the 2,400th anniversary of the birth of Aristotle (Photograph: Patrick Comerford, 2016)

The Irish Hellenic Society was marking this unique anniversary at the inaugural meeting of its 2016 programme. The meeting focussed on Aristotle’s life and works and on the celebration of his 2,400th birthday. The evening programme, with four short, witty, entertaining and informative presentations, was organised by the Irish Hellenic Society and the Department of Classics in Trinity College Dublin.

The American artist Paul Gregg’s exhibition ‘Inductive Probability’ is on view until tomorrow [23 October 2016] at the Royal Hibernian Academy in Ely Place, Dublin. He received a Fulbright Scholarship to Ireland, where he has lived since 1995, and is a lecturer at the Dún Laoghaire Institute of Art, Design, and Technology. His Aristotle’s Walk (2012) is a columnar structure, the focal point of a memorial garden in the central courtyard of Saint Mary’s CBS, Portlaoise.

Dr Thomaé Kakouli-Duarte is, like Aristotle, from Macedonia in northern Greece. Following in Aristotle’s researches into parasitic nematodes, she is an international expert in the field of environmental nematology and one of the founding members and the current Director of enviroCORE, in the Institute of Technology, Carlow. There she researches innovative bio-environmental technologies with a view towards enhancing economic and social development in an environmentally friendly manner.

Dr Eoghan Mac Aogáin studied philosophy at University College Dublin and psychology at the University of Alberta in Canada. He was a Research Fellow at the Educational Research Centre and later Director of the Linguistics Institute of Ireland before his retirement. He has spoken to the Irish Hellenic Society on the Irish philosopher Iohannes Scottus Eriugena (ca 800–870) and, with his colleague Máire Nic Mhaoláin, recently edited a new Irish-English dictionary.

Dr Fran O’Rourke, Emeritus Professor of Philosophy, University College Dublin, has recently published a volume of essays Aristotelian Interpretations. He will describe early personal experiences that inspired a distinctively Aristotelian approach to the world. He drew on a wide variety of literature and writers, including Charles Darwin and Cardinal John Henry Newman, as he explained why James Joyce believed Aristotle is ‘the greatest philosopher of all time.’

He quoted Darwin, who wrote: ‘Linnaeus and Cuvier have been my two gods, but in very different ways, but they were mere schoolboys to old Aristotle.’ Newman once said: ‘Aristotle is the Oracle of Nature and of Truth ... to think correctly is to think like Aristotle.’

His new book, Aristotelian Interpretations, was published earlier this year, and he presented me with a copy inscribed: ‘For Patrick, kindred spirit on the journey, fellow seeker of wisdom, warmest wishes.’

UNESCO has proclaimed 2016 as the Aristotle Anniversary Year. Aristotle can be seen as the founder of the concept of the democratic republic as the free, open political society of equal partners joined in friendship for achieving a just and qualitatively flourishing society. In his philosophy, he sought to bring into a unity all knowledge and all the arts for the practical possibility of human flourishing in democratic forms of government.

Last night’s reception in the Department of Classics was attended by many academics and scholars, working in the fields of chalssics, theology, philosophy and Greek studies, members of the Hellenic community in Ireland, Irish friends of Greece, and the new Greek Ambassador to Ireland, Mrs Aikaterini-Katia Georgiou. 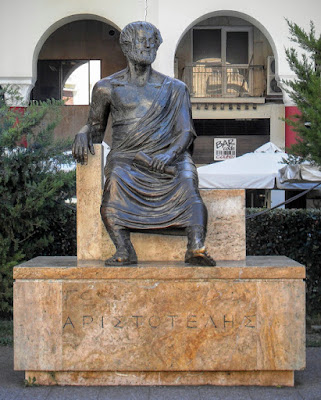 The statue of the Greek philosopher Aristotle in Aristotelous Square in Thessaloniki (Photograph: Patrick Comerford)