A panoramic view of Jerusalem from the Mount of Olives (Photograph: Bienchido/Wikipedia; click on the photograph for a larger image)

[Jesus spoke to his disciples:]

The first Sunday of Advent marks the beginning of the Church Year.

How do we begin our beginnings?

In Alice in Wonderland (Chapter 12), the White Rabbit put on his spectacles.

‘Where shall I begin, please your Majesty?’ he asked.

But in Advent we seem to start where we ought to stop. As we begin the lectionary readings for Year A, we are at the end of Christ’s life. But this is our beginning. For Advent is the time we prepare for the coming of Christ, not just as the child in the Christmas crib, but for the coming of Christ as king, and the ushering is of the Kingdom of God.

Our end is in our beginning.

TS Eliot’s poem ‘East Coker,’ the second of his Four Quartets, is set in late November and ends:

In my beginning is my end. In succession
Houses rise and fall, crumble, are extended,
Are removed, destroyed, restored, or in their place
Is an open field, or a factory, or a by-pass.
Old stone to new building, old timber to new fires,
Old fires to ashes, and ashes to the earth
Which is already flesh, fur and faeces,
Bone of man and beast, cornstalk and leaf.
Houses live and die: there is a time for building
And a time for living and for generation
And a time for the wind to break the loosened pane
And to shake the wainscot where the field-mouse trots
And to shake the tattered arras woven with a silent motto.

In my beginning is my end. Now the light falls
Across the open field, leaving the deep lane
Shuttered with branches, dark in the afternoon,
Where you lean against a bank while a van passes,
And the deep lane insists on the direction
Into the village, in the electric heat
Hypnotised. In a warm haze the sultry light
Is absorbed, not refracted, by grey stone.
The dahlias sleep in the empty silence.
Wait for the early owl. 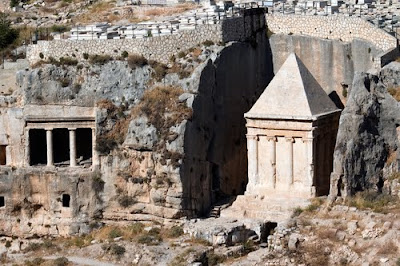 The geographical setting for this story is the Mount of Olives. Christ has been with the disciples in the Temple in Jerusalem, where has been teaching each day in that closing week.

Now we move to the end of the day, when he is on the Mount of Olives, looking back across the valley towards the City of Jerusalem and the Temple Mount. In the valley below are the tombs of prophets, priests and kings, one of the most breath-taking scenes I have seen.

Even to this day it is the burial place of pious Jews, political Jews, rabbis and prime ministers and monarchs, buried there waiting for the arrival of the Messiah, so that they can rise up with him on his arrival and join him as he makes his way down from the Mount of Olives, across the Valley, and up into the city of Jerusalem and the Temple Mount.

It is a setting that provides the dramatic backdrop for this reading, which is full of apocalyptic imagery as Christ talks about his imminent return.

Of course, Christ does not claim to know the exact time when this will happen – this is something that only the Father knows. But even if Christ does not tell his disciples when this time is coming, he warns them to be ready for it, to be constantly on the watch and to be prepared and ready for it. Sleepers awake!

If they watch and are ready, they will not be taken by surprise – unlike those who are surprised by tsunami or by a burglar in the night.

Yet, these same disciples will fall asleep in the garden, even when he asks them to ‘stay awake with me’ (Matthew 26: 36-46).

How often we live our lives in a carefree, happy-go-lucky manner, careless and without a worry about what the future might bring, almost asleep and oblivious to what is going on around us. Asleep while the world groans, content while the world suffers?

And so the Gospel reading is linked with what we should be waiting for, awake for, hoping for: for out of Zion, from Jerusalem, shall come the word when Christ comes to judge between the nations, and arbitrate for many peoples: ‘they shall beat their swords into ploughshares, and their spears into pruning-hooks; nation shall not life up sword against nation, neither shall they learn war any more’ (see Isaiah 2: 3-4).

The story of Noah and the flood (verse 37; see Genesis 6 ff) has a particular significance for Christians in the early Church, for Noah was a man who lived by faith, and who was preserved from destruction by his obedience to God. But also because the story of Noah and those who entered the Ark also symbolise those who enter the waters of Baptism and are a new creation (see Hebrews 11: 7; I Peter 3: 30; and II Peter 2: 5).

And, in another form of poetry or dramatic emphasis, we have the inclusio formed by repeating the words: so will be the coming of the Son of Man (see verse 37 and 39).

Or there is poetry in verses 40-41, which is missed if the translation you have treats these verses as prose and narrative, and runs it all together as consecutive sentences:

What does Matthew mean by the coming (παρουσία, parousia) in verses 37 and 39? This is a word used only by Saint Matthew among the Gospel writers, just as ‘the close of the age’ is another phrase that is peculiar to him alone.

Παρουσία means the presence, or the coming, the arrival, the advent, the future visible return from heaven of Christ, to raise the dead, to sit at the last judgment, and to set up formally and gloriously the kingdom of God.

The coming of the Son of Man is going to be divisive for all society. Kingdom values are not merely counter-cultural – they are socially divisive, for the values of this world should never be confused with or identified with the values of the Kingdom of God.

The visionary images in this passage can be compared with the apocalyptic visions throughout the Bible, the Old Testament and the New Testament.

But it is full of promise. The wedding feast is a recurring image of the heavenly banquet and the coming kingdom; the two women even manages, for me, to call me back to Ruth and Naomi in the field, which looks forward to the Messianic hope, while the parting of pairs, whether in field or on the threshing floor, reminds me that the word of God is ‘sharper than any two-edged sword’ (Hebrews 4: 12), or in the apocalyptic language used by Saint John on Patmos, from the mouth of God comes ‘a sharp, two-edged sword’ (Revelation 1: 16; 19: 15).

The division cuts through visible and apparent distinctions. We can stay with the values of this world, or be taken into the values of the Kingdom of God, but we cannot have both. Take it or leave it – destruction or the kingdom?

Watch, therefore, and be alert.

What is capable of stealing away your heart, your commitment, your values, your ministry?

Be alert for these.

But what, in the midst of uncertainty, can rob you of hope?

Be alert for this too.

Would you have chosen the easier option of preaching on the more comfortable visions in the Old Testament reading?

Be aware of making comfortable choices when it comes to preaching, without making connections.

How would you take account, if you were preaching on Sunday week, of the terrible doom that many in this country feel we are facing?

The radical author, professor and preacher, the Revd Robin Meyers, described by Archbishop Desmond Tutu as ‘scholarly, pastoral, prophetic, and eloquent,’ has written: ‘Life itself passes daily judgment on the idea that [God is in control], that good deeds and righteous living exempt us from mindless tragedy, or that the meek will inherit anything other than a crushing debt and a dead planet.’

But in a sermon some years ago in the First [Congregational] Church in Harvard Square, Cambridge, Massachusetts, on this day, the First Sunday in Advent, his colleague, the church historian, the Revd Dr J Mary Luti, of Andover Newton Theological School, responded: ‘Nonetheless, and hoping against hope, today’s scriptures emphatically encourage us to stand firm, to refuse to throw in the towel. God really is in charge, they assert, and one day you won’t have to take that on faith … Thus the first Sunday of Advent intends to make a pre-emptive strike on despair as the Church sets out on another year of following Christ from manger to grave, and beyond.’

And once again, I call to mind TS Eliot in ‘East Coker’:

O dark dark dark. They all go into the dark,
The vacant interstellar spaces, the vacant into the vacant,
The captains, merchant bankers, eminent men of letters,
The generous patrons of art, the statesmen and the rulers,
Distinguished civil servants, chairmen of many committees,
Industrial lords and petty contractors, all go into the dark,
And dark the Sun and Moon, and the Almanach de Gotha
And the Stock Exchange Gazette, the Directory of Directors,
And cold the sense and lost the motive of action.
And we all go with them, into the silent funeral,
Nobody's funeral, for there is no one to bury.
I said to my soul, be still, and let the dark come upon you
Which shall be the darkness of God …

And yet, in this apocalyptic visionary, poem work, Eliot is neither all doom nor all gloom:

… As, in a theatre,
The lights are extinguished, for the scene to be changed
With a hollow rumble of wings, with a movement of darkness on darkness,
And we know that the hills and the trees, the distant panorama
And the bold imposing facade are all being rolled away—
Or as, when an underground train, in the tube, stops too long between stations
And the conversation rises and slowly fades into silence
And you see behind every face the mental emptiness deepen
Leaving only the growing terror of nothing to think about;
Or when, under ether, the mind is conscious but conscious of nothing—
I said to my soul, be still, and wait without hope
For hope would be hope for the wrong thing; wait without love,
For love would be love of the wrong thing; there is yet faith
But the faith and the love and the hope are all in the waiting.
Wait without thought, for you are not ready for thought:
So the darkness shall be the light, and the stillness the dancing.
Whisper of running streams, and winter lightning.
The wild thyme unseen and the wild strawberry,
The laughter in the garden, echoed ecstasy
Not lost, but requiring, pointing to the agony
Of death and birth.

(Revd Canon Professor) Patrick Comerford is Lecturer in Anglicanism, Liturgy and Church History, the Church of Ireland Theological Institute. These notes were prepared for a Bible study with MTh students in a tutorial group on 16 November 2016.
Posted by Patrick Comerford at 09:00