Listening to callings before
setting out on a journey 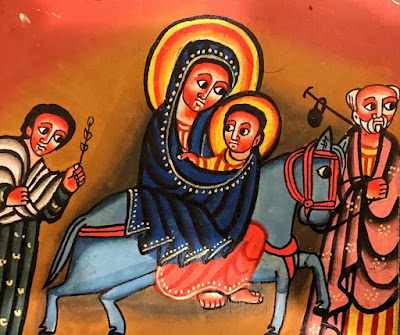 The Flight into Egypt … an icon by an anonymous Ethiopian artist (Photograph: Patrick Comerford, 2017)

The flight into Egypt is recounted only in the Gospel according to Saint Matthew (Matthew 2: 13-23), In this event, Saint Joseph learns after the visit of the Magi that King Herod the Great is plotting to murder the infants in his kingdom.

Herod the Great fears the new-born ‘King of the Jews’ that the Magi speak about is going to be a threat to his throne, and so he sets out to kill all innocent children under the age of two (Matthew 2: 1-8).

In a dream, an angel warns Saint Joseph of the plot, and so he takes the Virgin Mary and the Christ Child with him, and the family flee to Egypt (verse 13).

Egypt was to the west or south-west of Bethlehem a logical place to seek refuge: it was outside Herod’s kingdom, but both Egypt and Israel were part of the Roman Empire, linked by a coastal road known as ‘the way of the sea.’ After a time, the Holy Family returns from exile in Egypt and settle in Galilee.

In this account, Matthew 2:15 cites Hosea (11: 1) as prophetically fulfilled in their return from Egypt: ‘… and out of Egypt I called my son.

No other Gospel recalls this event. For Saint Luke, the Holy Family goes to the Temple in Jerusalem, and then directly home to Nazareth.

The story is often read as the final episode in the Nativity narrative, and is associated with this season of Epiphany. However, although the Lectionary readings this year draw on Saint Matthew’s Gospel, the fact that Christmas Day and New Year’s Day fell on a Sunday means that few people can have heard this story being read in church this Epiphany-tide.

Sadly, as a consequence, many parishes missed an interesting opportunity provided by the events and the geographical setting in this reading to consider the plight of refugees, particularly in North Africa, the Middle East and the Mediterranean.

Or, perhaps, given the major political events of this week, the story would have provided an interesting opening to discuss the policies and whims of capricious, self-centred and megalomaniac rulers.

As I write, I am heading west or south-west on a bus from Dublin to Adare in Co Limerick, preparing for tonight’s rehearsal in advance of tomorrow evening’s Service of Welcome and Introduction in Holy Trinity Church, Rathkeale, as priest-in-charge.

This is no exile or flight, but it is certainly a big move. It is living out the truth that we must be prepared to move in response to God’s call in Christ through the Spirit and through the Church.

I have no immediate or family connections with the Diocese of Limerick and Killaloe. So this bus journey is also the beginning of a new journey, a new stage, in my ministry and in my life.

I move into the Rectory in Askeaton, Co Limerick, tonight. The real work begins on Saturday morning. 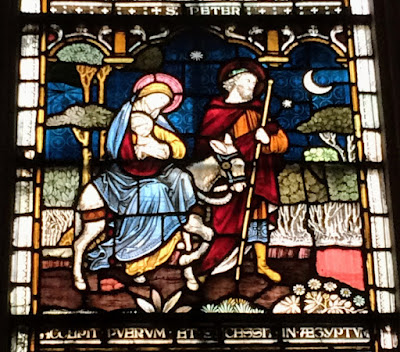 Posted by Patrick Comerford at 13:51