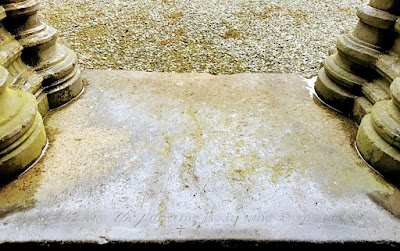 The inscription in the cloisters in Askeaton Friary, marking the burial place of the Pilgrim (Photograph: Patrick Comerford, 2017)

As I was strolling around the cloisters in Askeaton Friary at the weekend, I noticed a discreet inscription on one of the sills that reads: ‘Beneath lies The Pilgrim’s body, who died January 17th, 1784.’

But who was the Askeaton Pilgrim? And why was he buried in these cloisters long after the friary had been abandoned by the Franciscans?

The story begins in Askeatron 250 years ago, in the winter of 1767, when Don Martinez de Mendoza, a merchant from Barcelona, disembarked from a ship at Askeaton and moved into the ruins of the Desmond Castle, where he set up home.

Don Martinez did not tell anyone his name or the quest that brought him to Askeaton. But his arrival in Askeaton was prompted by his search for the Genoese man who had once captained one of his vessels.

The Italian captain fell in love with the merchant’s only daughter, Beatriz, in 1757. He knew that Don Martinez would never give him permission to marry Beatriz, and so their love remained secret.

Don Martinez wanted his beautiful daughter to marry a member of the Spanish aristocracy but she refused the approaches of his approved suitors. With the help of her uncle and her lady-in-waiting, Beatriz married her father’s captain in secret.

The newly-wed husband was soon sent back to sea, but hoped he would soon be reunited with his new bride. After spending the winter of 1757 in port, the captain was to lead the fleet to the West Indies. The young couple decided that on his return, they would tell Don Martinez of their marriage.

The captain left for the West Indies without knowing that his wife was pregnant. Don Martinez now had to be told and went into a fit of rage. Even when the priest who performed the wedding told the merchant what had had happened, he refused to accept that his daughter’s wedding had ever taken place.

For bringing disgrace to his name and his family, Don Martinez sent his daughter to a convent and swore an oath that he would kill his captain.

Don Martinez had men waiting at the port in Barcelona to kill his captain, but the captain’s friends rowed out to the vessel and told him of the trouble that awaited him at port and that his wife was in labour. By the time the captain reached the convent, he was too late – his wife had given birth to a son, and had died in childbirth.

He hastily arranged the burial of his wife and the care of his son with the nuns before he fled Barcelona. He took with him the ebony ring he had given his wife before he left for the West Indies.

In his rage, Don Martinez sold all his possessions and set off in search of his son-in-law. For 10 years, he travelled throughout Europe in search of the Genoese captain, asking sailors for information on his whereabouts. 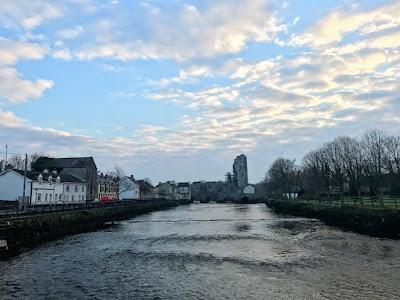 The Quay at Askeaton, where the Pilgrim arrived in the winter of 1767, and in the background the castle where he lived for a month (Photograph: Patrick Comerford, 2017)

In the winter of 1767, Don Martinez disembarked from a ship at Askeaton and he moved into the ruins of the Desmond Castle, where he lived for some weeks. Don Martinez did not tell anyone his name or the quest that brought him to Askeaton.

After a month, he left Askeaton and resumed his search. Somewhere in Ireland, he found his son-in-law captain, murdered him and took his daughter’s ebony ring.

After the murder, Don Martinez realised the enormity of his actions, and became distraught with grief. In his distress, he travelled throughout Ireland before eventually returning to Askeaton. In the middle of the night, he knocked on the door of Phil Rourke, the local schoolmaster and parish clerk.

Phil Rourke was shocked by the figure who stood before him. Don Martinez was now a dishevelled and haggard old man with a grey beard. The following morning the stranger told Phil Rourke to take his purse of gold and remove what he needed to live a comfortable life. All the stranger wanted in return was to be provided with some bread and water for the remainder of his life.

The stranger went to Askeaton Friary, where he made a bed for himself. For the next 16 years, Don Martinez devoted his life to prayer and meditation, hoping for forgiveness for his sin. Each January, the stranger left Askeaton and it was believed that he travelled to the principal holy sites throughout Ireland. On hearing this tale, Phil Rourke called him ‘the pilgrim.’

The stranger agreed to see a priest and Phil Rourke went in search of the priest. When the priest and teacher returned, the pilgrim was lying face down in the friary. Within a few minutes, he was dead, and they buried him at the spot where he died. 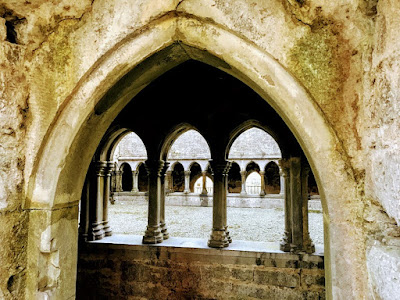 The cloisters in the Friary in Askeaton where the ‘Pilgrim’ was buried when he died on 17 January 1784 (Photograph: Patrick Comerford, 2017)

However, this is not the end of the story.

Later that year, in the summer of 1784, a boat sailed into Askeaton with soldiers. Phil Rourke saw the soldiers disembarking and three soldiers headed towards his house. Rourke ran to his house, but the soldiers had seen him and banged on his door until he opened it.

One of the soldiers at the door was a man in his 20s who bore an uncanny resemblance to the pilgrim who had died earlier in the year. Rourke handed him the small book that he had been given by the pilgrim at his death.

Together, Phil Rourke and the soldiers went to the friary, and he showed them the pilgrim’s grave of the pilgrim. There they all knelt in prayer for the soul. The soldier revealed he was the grandson of the pilgrim, Don Martinez de Mendoza. Don Martinez, who had contacted the convent before his death to tell the nuns of his dreaful deed.

With the aid of a lamp, the soldier read the notebook, and then ordered his men to the cloisters to dig in certain places. They soon found a cask full of jewels but continued digging. One of the men removed one of the pillars and found a small oval box. Inside the box lay a miniature likeness of a woman and an ebony ring. Both belonged to the soldier’s mother, Beatriz.

The soldiers left, taking with them what they had found and the two pillars they had taken down during their search. The young man had left the notebook behind him; Phil Rourke picked it up and left the friary.

When people from Askeaton visited the Friary the following day they were outraged by the damage to the cloisters. But it said that Phil Rourke decided not to tell anyone what he had seen until 20 years later, when, at the age of 90, he told his story to a local scholar, who had the notebook translated.

What happened to the young soldier in the end is neither known nor recorded.

What an extraordinary and moving tale.