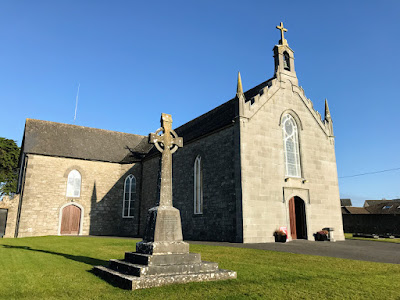 The Parish Priest of Askeaton and Ballysteen, Father Seán Ó Longaigh, was one of the ecumenical guests at my introduction to the Rahkeale Group of Parishes earlier this month, and I look forward to a close working relationship between the two parish churches in Askeaton, which are both named Saint Mary’s.

Naturally, one of the first places that I visited in my first few days in Askeaton was Saint Mary’s Roman Catholic Church. It was still the Week of Prayer for Christian Unity, and with the two Saint Mary’s churches at each end of the town, I felt as if we were book-ending Askeaton, or holding it one great ecumenical embrace.

The list of parish priests of Askeaton dates back to 1704, and this list is complete from the end of the 18th century.

The present church dates from 1851-1853, and was built after an earlier church near the Franciscan friary, to the right of the main abbey gate, was destroyed by fire in 1847. The fire, which started in a nearby mill, killed one worker and severely other workers were burned. During the fire, the parish priest, Father Edward Cussen, put his life at risk as he worked rescuing several men from the blaze. 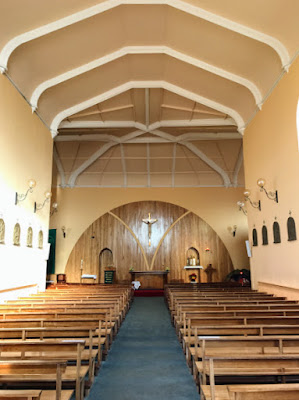 Inside Saint Mary’s … the church was restored, renovated and reordered in the 1970s (Photograph: Patrick Comerford, 2017)

The new church was built on a site on the western road while Father Cussen was still the parish priest. While the church was being built, Mass was celebrated in what was later Fitzgibbon’s Store in Brewery Lane. Building work began in 1851 and was completed in 1853. Father Cussen died in 1860, and is buried under the main aisle of the church.

The church is built of local limestone, with beautiful stained glass windows. In more recent decades, it was restored, renovated and reordered in the 1970s while Canon Thomas Kirby was the parish priest (1969-1985). Bishop Jeremiah Newman of Limerick rededicated the church on 23 May 1977.

Inside the church, there are four interesting stained glass windows.

In the centre of the nave, the window on the left depicts Saint Patrick receiving Eithne and Fidelma, the two daughters of Laoghaire, King of Ireland, into the Church. This window commemorates Mary and Brigid Casey, who died from TB at age 19. The window opposite it, a window shows Christ with the little children. This window is in memory of Annie Mulraire.

Two further stained-glass windows depict the Resurrection in the right transept and the Ascension in the left transept.

These four large stained-glass windows by the Mayer studios were installed in the church in 1920s.

The Mayer studios of stained glass makers has worked from Munich, London, Dublin and New York. The company had its origins in the Institute for Christian Art Works, founded in Munich in 1847 by Josef Gabriel Mayer (1808-1883) to revive and promote the church building trades of the Middle Ages.

These studios originally produced altars and shrines, and began to manufacture stained glass in 1856. They met with such success that a branch opened in London in 1865, and a New York branch opened in 1888. Windows by Mayer & Co. abound in Ireland, in both Roman Catholic and Church of Ireland churches.
Harry Clarke’s father, Joshua Clarke, was the Irish agent for Mayers. Mayers windows are noted for the detail in the faces of the figures depicted and contain a rich array of ecclesiastical vocabulary. Frequently, saints are shown with their personal symbols.

Today, Mayer still produces stained glass windows, with headquartersd in Munich, and the firm is still by descendants of the founder.

Over the main door of the church, a fifth stained-glass window depicting the Blessed Virgin Mary is in memory of the McDonnell family of Milltown. This window is in the style of Harry Clarke and dates from the early 1950s.

Christ with the little children … a window by the Mayer studios (Photograph: Patrick Comerford, 2017)

In addition, there are two interesting statues in the church: over the main door, the large statue of the Pieta is a replica of Michelangelo’s Pieta in Saint Peter’s Basilica in the Vatican, while under the gallery there is a statue of the Virgin Mary as the Immaculate Conception.

In front of the church, a cross marks the grave of Father Edmund Treacy, who was Parish Priest from 1892 until he died on 23 November 1908. In all, eight priests of the parish, including parish priests and curates, are buried in the church grounds.

A large limestone monument in the church grounds commemorates the 150th anniversary of the church, which was celebrated in 2001. As part of the celebrations, the National Museum gave the parish on loan for the day the ‘Askeaton Madonna,’ a priceless 15th century Nursing Madonna and Child carved in oak, probably originating in the Franciscan Abbey in Askeaton.

This figure was described in a paper by Caitríona MacLeod in a collection of essays published in 1987 in honour of Helen Roe. She describes this as native Irish in origin, and dates it to the mid-15th century. She says: ‘The fact that this statue survived at all, given the upheavals that racked Ireland for centuries, is remarkable.’

There is no way to determine the original provenance of the statue, which was found hidden in a small farmhouse just a mile from Askeaton Friary in the 19th century. 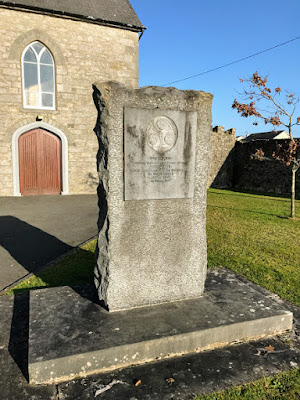 A large limestone monument in the church grounds commemorates the 150th anniversary of the church in 2001 (Photograph: Patrick Comerford, 2017)

Hello, just inquiring if you can remember any of your sources for this. Especially this section « The fire happened at the height of the Great Famine, and there were no funds locally to build a new church. And so, Father James Enright was sent to US to raise funds for a new church ».
I am finding it very difficult to find accounts of the churches fundraising and construction.