Living in the ‘in-between time’,
without fear, with hope and love 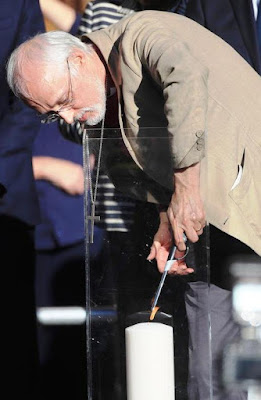 Bishop David Hamilton lights a candle at the vigil in Albert Square, Manchester

The Seventh Sunday of Easter,

The Sunday after Ascension Day.

In the meantime, we are in what we might call ‘in-between time.’

In the reading from the Acts of the Apostle on Thursday evening [Acts 1: 1-11] and today [Acts 1: 6-14], two angels in white robes ask the disciples after the Ascension why they are standing around looking up into heaven. In the Gospel reading [Luke 24: 44-53], they return to ‘Jerusalem with great joy,’ and seem to spend the following days in the Temple.

As the story unfolds in the Acts of the Apostles, the disciples, as well as Mary and other women (see verse 14), spend their time in prayer, choosing a successor to Judas, as we are told in this morning’s first reading [Acts 1: 6-14].

Ten days after the Ascension, they are going to be filled with Holy Spirit, who comes as a gift not only to the 12 but to all who are gathered with them, including Mary and the other women, the brothers of Jesus (verse 14), and other followers in Jerusalem – in all, about 120 people (see verse 15).

But for these few days, they and we are in that in-between time, between the Ascension and Pentecost.

It is still the season of Easter, which lasts for 50 days from Easter Day until the Day of Pentecost. But this morning we are still in the Easter season, in that ‘in-between time,’ between the Ascension and the pouring out of the Holy Spirit on the Church on the Day of Pentecost.

Their faith persists, but the promise has not yet been fulfilled.

They wait in hope. But until that promise is fulfilled they are, if you like, transfixed, believing with doing, unable to move from Jerusalem out into the wider word.

Is this the same upper room where they had gathered after the Crucifixion, behind locked doors, filled with fear, until the Risen Christ arrives and, as Saint John’s Gospel tells us, says to them: ‘Peace be with you … Peace be with you … Receive the Holy Spirit … forgive’ (see John 20: 19-23).

Fear can transfix, can immobilise us. It leaves us without peace, without the ability to forgive, without the power to move out into, to engage with the wider world out there.

And that is what could have happened in Manchester last week.

But too often we are caught between Ascension Day and Pentecost, waiting but not sure that the kingdom is to come, frightened in the terror and the pain of the present moment.

What happened in Manchester on Monday night has created unspeakable sadness and outrage that has been easier to express.

It is the sort of horror that is experienced day-by-day and week-by-week in Iraq, as we hard on the news this morning, in Egypt, where a large number of Coptic Christians were attacked in recent days, in Syria, Libya, Afghanistan, Pakistan … and so many other parts of the world.

Why does Manchester shock us?

Because we know it so well, because it is so near. It has brought the horrors of the world not just to our screens but to our doorstep. And we feel powerless, we do not know what to do.

Feeling powerless and fearful and not knowing what to do combine to make a deadly cocktail that not only immobilises us but robs us of hope.

Seeing parents frantically waiting and running at the entrance to the arena reminded so many of times we have been waiting for our own children.

The people who were killed on Monday night could be our daughters or grand-daughters. There were parents and grandparents killed too who were the same age as me – even younger.

Many of us remember an IRA bomb in almost the same location in Manchester in 1996 that could have been as devastating.

But hopefully we can also see ourselves in the nurses, the doctors, the police, the emergency responders, who responded immediately, without considering that they might be putting themselves in further danger … the taxi drivers who gave free lifts, the people who opened their doors to strangers late at night to offer comfort and shelter.

We can see ourselves in them. And hopefully we can see the face of God in those who were the victims and those who responded.

For me, the face of Christ was shown in the face of Chris Palmer, a homeless man who was in the foyer begging when the bomb went off. He told the Guardian: ‘It knocked me to the floor and then I got up and instead of running away my gut instinct was to run back and try to help.’ He described how one women with serious leg and head injuries ‘passed away in my arms. She said she had been with her family. I haven’t stopped crying.’

Or in the face of Steve, another homeless man who told ITV he had pulled nails from the arms and faces of screaming children. ‘It had to be done,’ he said. ‘You had to help, if I didn’t help I wouldn’t be able to live with myself for walking away.’

The Mail Online columnist Katie Hopkins in a despicable tweet said there was a ‘need for a final solution.’ She later deleted it, claiming it was a ‘typo.’ Well, she had misspelled Manchester. But the ‘Final Solution,’ as the Nazis called the Holocaust, was no ‘typo’ and cannot be withdrawn.

One stupid candidate in the election even called for the death penalty for suicide bombers. As I thought about that, I just wondered where do people like that draw their inspiration from.

But talk about a ‘Final Solution’ cannot even be contemplated in a civilised Europe. Indeed, it is also beyond the comprehension of people like this that, when you had up the figures, the vast majority of the victims of Isis are actually Muslims.

Instead, however, I was heartened by the Bishop of Manchester, David Walker, who lit a candle that he said symbolised an unquenchable light that no darkness could ever destroy.

Immediately after the attack, he said: ‘Today is a day … to reaffirm our determination that those who murder and maim will never defeat us.’

In what the Manchester Evening News described as ‘an inspirational speech in the aftermath of the tragedy,’ Bishop David told the vigil in Albert Square: ‘You cannot defeat us because love, in the end, is always stronger than hate,’ to rapturous applause. ‘We will pull together because we stand together. Whatever our background, whatever our religion, our beliefs, our politics we will stand together because this city is greater than the forces that align itself against it.’

As Bishop David so wisely noted, ‘Many lives will be lived out, impacted by this tragedy for long years to come. Others have had decades of life ripped away from them … But today is also a day to begin our response. A response that will crush terrorism not by violence but by the power of love. A love which Christians celebrate especially now in Eastertide.’

And this is the Easter hope.

This is the hope that we will never lose our capacity as Christians to live with the Risen Christ, listening to his desire that we should be not afraid, and that we should love one another.

This is the hope we wait for between the glory of the Ascension and the empowering gifts the Holy Spirit gives us and promises us at Pentecost. 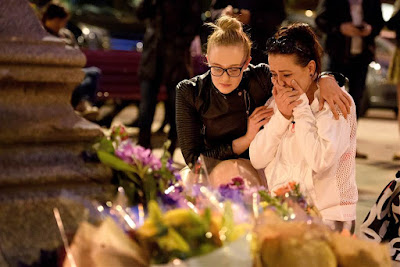 Fear, hope and love in Manchester in the past week

(Revd Canon Professor) Patrick Comerford is Priest in Charge of the Rathkeale and Kilnaughtin Group of Parishes. This sermon was prepared for Morning Prayer in Castletown Church, Kilcornan, Co Limerick, on Sunday 28 May 2017.