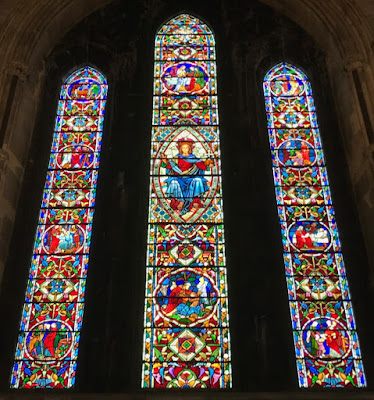 Earlier this week, I was discussing Archbishop Michael Ramsey and his visit to Limerick in 1961 to dedicate the Ascension Window in the Jebb Chapel in Saint Mary’s Cathedral memory of Horace Stafford-O’Brien (1842-1929).

The window was commissioned by Horace Stafford-O’Brien’s son, Major Egerton Augustus Stafford-O’Brien (1872-1963), of Cratloe, Co Clare, who was an uncle by marriage of Archbishop Ramsey’s wife, Joan.

I returned to Saint Mary’s Cathedral at the end of this week to see some other windows and memorials that are associated with the Stafford-O’Brien and O’Brien families.

Horace’s uncle, Augustus Stafford O'Brien-Stafford (1811-1857), was perhaps the best-known member of the family. He was the MP for Northamptonshire North from 1841 until his early death in Dublin in 1857, and was Secretary to the Admiralty in Lord Derby’s short-lived government from February to December 1852. In 1847, he assumed by royal licence the additional name of Stafford by royal licence in 1847 to distinguish himself from his kinsman William Smith O’Brien.

During the Crimean War, Augustus Stafford went to Scutari in 1857 to assist Florence Nightingale’s work with the sick and wounded. It was said at the time that Florence Nightingale had paid for the large, three-light stained-glass East Window in his memory in Saint Mary’s Cathedral.

This East Window was erected in 1857-1860 in the early English style and replaced an earlier perpendicular window designed by James Pain and installed in 1843. Pain’s East Window was considered out of keeping with the west windows and the transept windows, and was moved by Saint Michael’s Church in Pery Square, which was designed by the brothers James and George Pain in 1836-1844.

The new window was designed by the English architect William Slater (1819-1872), who was restoring the East End or Chancel of Saint Mary’s Cathedral at the time, and was filled with stained glass as a memorial to Augustus Stafford.

Augustus Stafford was the eldest son of Stafford O’Brien of Blatherwick Park, Northampton, and Cratloe Woods, Co Clare, and his wife Emma, sister of Lord Gainsborough and daughter of Sir Gerald Noel MP.

Augustus Stafford was born in 1811, was educated at Trinity College Cambridge, and as the MP for Northamptonshire, he sat as a Conservative Protectionist.

He was a distinguished scholar and statesman, and was regarded as an eloquent speaker in Parliament. But he was also highly regarded for his philanthropic work. Following the Battle of Balaklava in the Crimean War, Augustus Stafford visited Crimea, and helped to administer medical aid and comfort to the wounded and dying soldiers.

Not every Irish observer was impressed by his work in Crimea, however. Colonel John Bourke, a former MP for Kildare, wrote to his brother, Lord Naas, claiming Augustus lived away from Scutari and only came to the hospitals for a few hours each day in an act of self-publicity.

On the other hand, Florence Nightingale hailed him as a hero, and Chichester Fortescue, the Liberal MP for Louth, recalled how Augustus had ‘behaved so well’ at Scutari.

When he returned to Westminster, he spoke in the Commons about the needs of the invalid veterans and their families, and on the death toll. He returned to Crimea again in 1855.

He died suddenly in a Dublin hotel on 18 November 1857, while he was on his way back to Limerick from England. A committee was formed to raise funds for the window in Saint Mary’s Cathedral as a public memorial to him in Limerick. The committee members included the Marquis of Drogheda, the Earl of Powis, five senior clergy and two MPs.

They raised over £1,500, and the rumour soon spread that the principal if not sole donor was Florence Nightingale – although her contribution amounted to three guineas, while the tenants and labourers of the Cratloe Estate contributed almost £50.

The glass, by Clayton and Bell of London, one of the most prolific and proficient English workshops of stained glass during the late 19th and early 20th century. Clayton and Bell also designed the five-light window in the north transept of the cathedral in memory of Samuel Caswell. Windows by Clayton and Bell can be seen in churches throughout Ireland, including Saint Bartholomew’s Church, Ballsbridge, Dublin, Lurgan Parish Church, Virginia, Co Cavan, and Saint Mary’s Church, Julianstown, Co Meath.

The Biblical subjects represented in the East Window are:

In the centre: Christ enthroned; overhead, the Charity of Dorcas; below, the Good Samaritan. On the left (north side): Burying the dead. A stranger and ye took me in. In prison and ye came unto me. Thirsty and ye gave me to drink. On the right (south side light), Guiding the mind. Naked and ye clothed Me. Sick and ye visited Me. Hungry and ye gave Me to eat. (Matthew 25: 31-35).

The window was renovated, re-leaded and cleaned in 1923 by the Dublin Co-operative Stained Glass works, under the supervision of Sarah Purser RHA.

The window on the south side of the chancel in Saint Mary’s Cathedral, Limerick, is a memorial to Robert O’Brien (Photograph: Patrick Comerford, 2017)

To the right of the East Window, there are two interesting memorial windows on the south side of the chancel. The larger of these two windows is another memorial to a member of the O’Brien family. The two-light window represents the Biblical subject, ‘The Building of the Temple.’

The inscription at the foot of the window reads: ‘The Hon Robert O’Brien, of Dromoland Castle. Born 1809. Died 1870.’

Robert O’Brien was the fourth son of Sir Edward O’Brien of Dromoland Castle, Co Clare, and a brother of then Lord Inchiquin. He married Eleanor Jane Alice Lucy, daughter of Sir Aubrey de Vere of Curragh Chase, and formerly MP for Limerick City.

Robert O’Brien took a deep and practical interest in all matters concerning the cathedral and he helped liberally in carrying out many important renovations. During his lifetime, he lived at Old Church in the neighbourhood of Limerick, and he was buried in the family vault in Newmarket-on-Fergus. 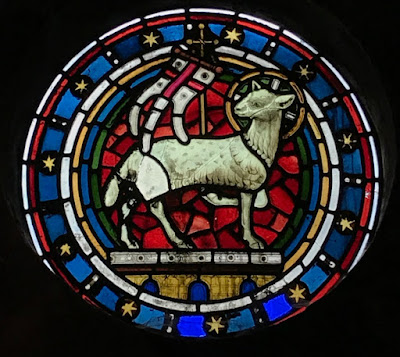 The Agnus Dei window is a memorial to Charles Maunsell (Photograph: Patrick Comerford, 2017)

Below this window, a small circular Agnus Dei window is a memorial to Charles Maunsell, and was presented by his sister, Mrs Robinson. The window shows Christ as the Lamb of God, with a nimbus or a halo and a white banner with a red cross as a symbol of the Resurrection.

On the north side of the chancel, the O’Brien family is also commemorated in the majestic, Renaissance-style O’Brien monument.

The effigies of Donough and Elizabeth were badly damaged by Cromwellian soldiers. But the memorial survives as part of a collection of tributes to the O’Brien family at the east end of Saint Mary’s Cathedral, Limerick. 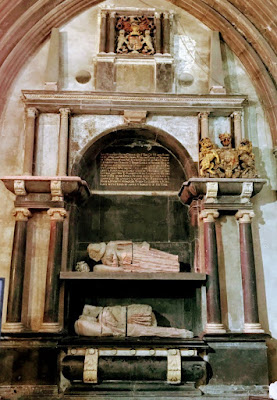 The O’Brien monument on the north side of the chancel in Saint Mary’s Cathedral, Limerick (Photograph: Patrick Comerford, 2017)