Unique windows are
part of the heritage of
Saint Mary’s, Julianstown 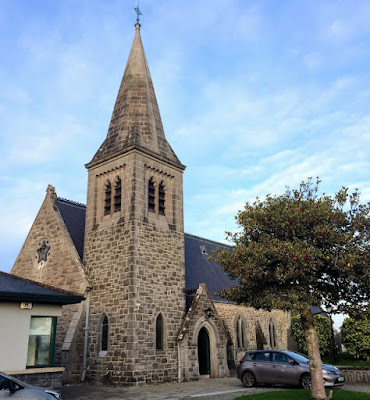 I have preached before in Saint Mary’s Church, Julianstown, Co Meath, and during my schooldays nearby in Gormanston it was a church I loved to visit in my teens. But I had never before photographed the interior of the church until last Saturday. Two of us were on our way to Laytown and Bettystown for a walk on the beach and a late lunch in Relish when we noticed the church door was opened, and we received a warm welcome from parishioners who were decorating the church in advance of Sunday evening’s carol service.

Julianstown was for long the seat of the Moore family who lived in Julianstown House and who farmed the land that now contains the townland of Julianstown West.

There has been a church on this for centuries. In the Middle Ages, the church lands here were part of the Irish possessions of the Welsh abbey of Llanthony. The parish later came into the hands of the Earls of Drogheda, who retained the right of appointing the clergy until the disestablishment of the Church of Ireland.

The original ecclesiastical designation was Nanny, derived from the River Nanny which flows nearby and into the Irish Sea at Laytown. The church survived the Battle of Julianstown in 1641, and Cromwell's destruction of Drogheda in 1649. The church in Julianstown is described in Dopping’s Visitation Book, compiled between 1682 and 1685.

Saint Mary’s Church was built ca1770 on the site of an earlier church, and Taylor and Skinner’s 1783 Road Map of Ireland refers to the Moore family home and shows the parish church on the site of the present church.

Over the centuries, this church has been restored, rebuilt and enlarged, but the present building is largely a creation of the 1860s. The church was extended and remodelled from 1861-1863, to the designs of Welland and Gillespie, who incorporated parts of the 1770 church in the nave. 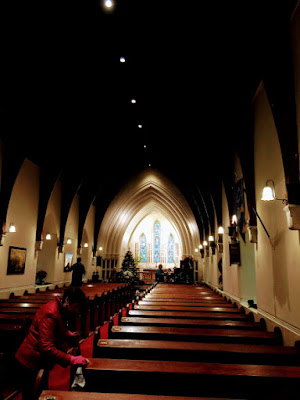 William John Welland and William Gillespie were appointed joint architects to the Ecclesiastical Commissioners in May 1860, after the death of Joseph Welland. Both men were already working for the Church Commissioners, and continued to hold their post until the disestablishment of the Church of Ireland at the end of 1870. During those ten years, they developed an increasingly personal and idiosyncratic version of Gothic in the churches which they designed.

William John Welland (ca 1832-1895) was a younger son of Joseph Welland, successively architect to the Board of First Fruits and to the Ecclesiastical Commissioners, and his wife Sophia Margaret (Mills). He was educated at Trinity College Dublin (BA, 1855, MA, 1879), and may have entered the architects’ department of the Ecclesiastical Commissioners directly from TCD. He was elected a Fellow of the Royal Institute of Architects of Ireland (FRIAI) in 1863, and died in 1895.

William Gillespie (1818-1899) was a son of William Stawell Gillespie of Cork and his wife Catherine Terry Williams. By 1847, he was working as a district inspector for the Ecclesiastical Commissioners.

Gillespie spent his last days in Plympton House, near Plymouth, Devon, a private lunatic asylum belonging to a Dr Charles Aldridge, where he died of ‘senile decay’ on 20 December 1899.

The church designed by Welland and Gillespie in Julianstown is a detached church, with a four-bay side elevation to the nave, a single-bay chancel and vestry to the east, and a gable porch to the south elevation, and incorporating parts of the fabric of the earlier church dating from ca 1770.

The church retains many interesting features and materials, such as the dressed limestone, pointed-arched windows, and stone finials. 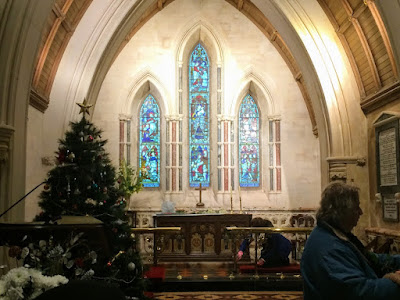 The chancel and altar were added to the church in 1914 through the generosity of Colonel Charles Pepper family of Ballygarth Castle, to designs by James Franklin Fuller (1835-1924). The builders were McLaughlin and Harvey. 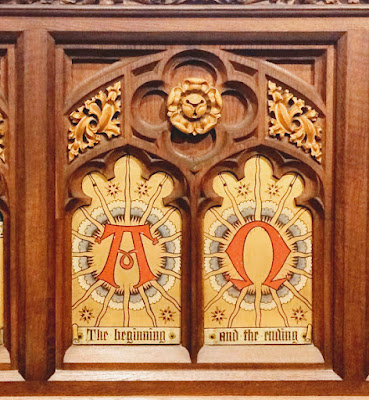 The AΩ symbol in the centre of the altar designed by James Franklin Fuller (Photograph: Patrick Comerford, 2016)

Fuller’s work at Saint Mary’s in Julianstown includes the elaborate altar decorated with figures of the four evangelists on the front and the AΩ symbol in the centre.

The pointed arch windows are set in openings with ashlar limestone dressings. These windows together form a unique collection of stained glass windows by Clayton and Bell and Heaton, Butler and Bayne – two English-based partnerships that were among the leading firms of Gothic Revival stained glass manufacturers, and whose work was commissioned by the principal Victorian architects. 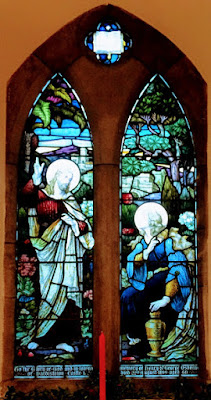 The Risen Christ appearing to Mary Magdalene (1899), one of the four windows by Heaton, Butler and Bayne in Saint Mary’s Church, Julianstown (Photograph: Patrick Comerford, 2016)

The four windows by Heaton, Butler and Bayne in Julianstown depict the Risen Christ appearing to Mary Magdalene (1899), in memory of Henry St George Osborne of Dardistown Castle; the Agony in the Garden and Christ carrying the Cross (1907), in memory of Henry Moore, his wife and their children; Angels with Scrolls (1907); and the Ascension (1907). The Ascension is depicted in four parts in three lancet windows at the West End, and this collection was donated in memory of three members of the Tunstall Moore family. 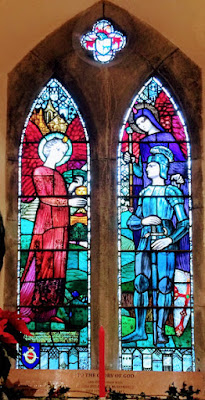 The other attractive stained glass windows in the church include one designed by Michael Healy (1873-1941) of An Túr Gloine Studios, depicting the Faithful Warrior, in memory of Lieutenant-Colonel John McDonnell of Kilsharvan House, between Duleek and Bellewstown.

Colonel McDonnell was part of the 5th Battalion of the Leinsters, attached to the Royal Inniskilling Fusiliers, when he was killed in 1918. He was buried in the Resevoir Cemetery in Ypres, Belgium, In 1924, when the official headstone was placed on his grave, the initial grave marker from 1918 was brought to Kilsharvan graveyard and inset into the wall as a memorial to him. His son, Lieutenant Robert Edward McDonnell, was killed in Libya in 1941 during World War II and was buried in Benghazi War Cemetery.

Other windows in the church by Clayton and Bell commemorate seven officers of the Royal Meath regiment who were killed in World War I.

The tower and spire proposed by Welland and Gillespie in 1863 were never erected, and the present three-stage tower and steeple were built through the generosity once again of Colonel Charles Pepper of Ballygarth Castle in 1906-1907, and again to designs by James Franklin Fuller. The builders were McLaughlin and Harvey.

The church has a pitched slate roof with ridge cresting and stone finials. There are squared limestone walls with tooled limestone quoins.

There is a pair of timber doors with wrought-iron detailing. In the church porch, a fragment of a High Cross came from Saint Columba’s Church, Colpe, Drogheda, and dates from the 10th century.

There is a single-storey modern building to the west.

Outside the church is an interesting stone known locally as the Apostles’ Stone. This sculpture was originally located in the chapel of Ballylehane Castle, Co Laois, owned by the Hovenden family from 1549 to 1820. It was moved to Dardistown Castle and finally to this church in Julianstown.

The sculpture consists of three stones. Because of its depiction of 12 figures it became known as the Apostles’ Stone. The figures appear to be priests each wearing a hood and girdle; some have beards and some are clean shaven.

The cemetery is also believed to hold the grave of Anne Tandy, wife of Napper Tandy (1737-1803). He was a merchant, volunteer and radical politician who was born in Dublin, and a key figure in the 1798 Rising. 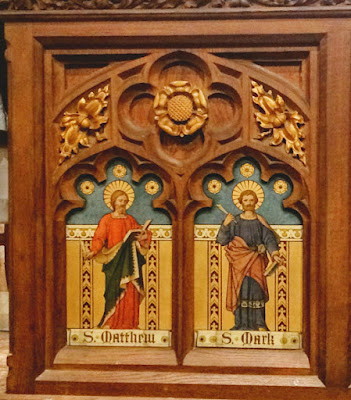 The figures of Saint Matthew and Saint Mark on the front of the altar designed by James Franklin Fuller (Photograph: Patrick Comerford, 2016)

Today, the Church of Ireland Parish of Julianstown and South Drogheda covers the area between the River Boyne and the River Delvin in South Louth and East Meath, including all of south Drogheda, Mornington, Bettystown, Laytown, Julianstown, Mosney and Gormanston on the coast, and inland incorporating Bellewstown, Stamullen and Duleek.

There are about 130 Church of Ireland households in the parish. In addition to business and farming families who have lived in the area for many years, there are families that recently moved there. Saint Mary’s Julianstown, is the only church in the parish, and this is the only single-church incumbency in the Diocese of Meath and Kildare. The churches at Saint Mary’s, Drogheda, and Saint Columba’s, Colpe, closed in recent years, although the churchyards are also still in use.

A new rector is expected in the parish next March.