No 96 O’Connell Street,
Georgian house not to
be passed by in Limerick 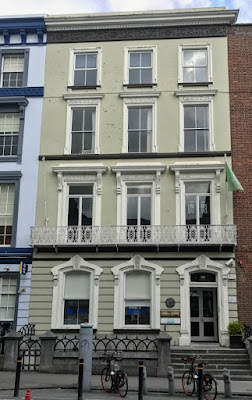 I am sure many people walk by No 96 O’Connell Street every day without noticing this architecturally beautiful building, and without ever gaining a hint of the splendid plaster work, fireplaces and interior fittings.

The Chamber of Commerce had its first headquarters at the former Commercial Buildings on Patrick Street, built in 1805. It was formally constituted by Royal Charter from King George III on 2 June 1815, and it moved to No 96 O’Connell Street in 1829 or 1833.

During the first half of the 19th century, the chamber played a key role in the development of Limerick Harbour and also assumed control over pilotage in the River Shannon and made payments to individuals who salvaged vessels and marked hazards in the estuary.

No 96 O’Connell Street was built about a decade earlier, ca 1815-1820 on what was then George’s Street. The house remains a fine building, with much of its early 19th-century interior still intact, in sharp contrast to the later 19th-century stucco façade.

Because the building still has many of its original fine architectural and decorative details, which are all well-maintained, when I visited No 96 on Thursday afternoon I was able to appreciate the fine Georgian interiors and details that add to the restrained effect intended by the architect who designed this townhouse.

This terraced, three-bay, four-storey over basement former townhouse was built ca 1815-1820 as part of the development of Newtown Pery. It was refaced in stucco ca 1880 and it is distinguished by the channel rusticated ground floor elevation, foliate frieze to the parapet entablature and the cast-iron balconette that emphasises the entablature enriched window openings of the piano nobile. 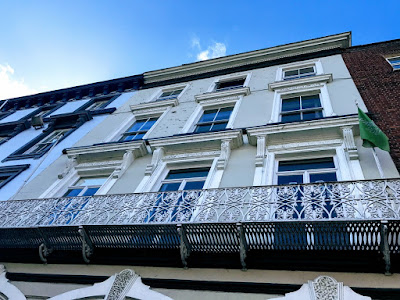 The cast-iron balconette brings emphasis to the windows on the piano nobile (Photograph: Patrick Comerford, 2017)

The roof is concealed behind the parapet wall to the front and rear, with a red-brick chimney-stack to the party wall.

The building has a stucco rendered façade, with a channel rusticated ground floor that ends with a running mould sill cornice at the first-floor level, and above this the façade is plainly rendered.

A sill course delineates the second-floor level and the façade terminates with a dentil enriched parapet entablature.

The segmental-arched window openings at ground floor level have painted profiled sills and painted stucco architraves with vermiculated keystone and foliate brackets that add emphasis to the frame. There are one-over-one timber sash windows with segmental horns.

The square-headed window openings of the piano nobile have a continuous painted stucco sill course, a lugged architrave and outer pilaster uprights with an entablature that has guilloche mouldings to the frieze, supported by a parapet entablature. The continental-style casement windows have fixed horizontal over-lights and date from ca 1880. 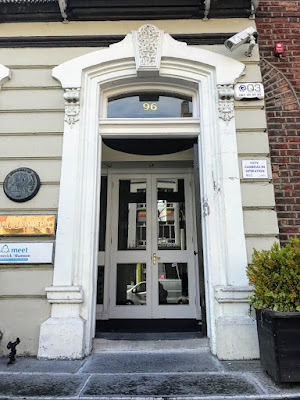 The front door … evidence of the brick arch of the original door opening to the right (Photograph: Patrick Comerford, 2017)

The segmental-arched door opening has a surround treatment that echoes the window openings at ground level. The inset timber doorframe has a profiled timber lintel separating the plain glass over-light from the flat-panelled timber door. The remains of part of the brick arch of the original door opening can be traced on the neighbouring late Georgian façade to the right.

At the front, the basement area is enclosed by a limestone ashlar plinth wall that ends with limestone piers with stop-chamferred corners and pyramidal capping stones. There is canted coping to plinth wall supporting distinctive arched cresting.

The flight of limestone steps leads up to the limestone flagged front door area, where there is still an original cast-iron boot-scraper.

Inside, No 96 retains much of the spatial arrangement and architectural detailing dating from ca 1815-1820.

The entrance hall has a glazed inner porch screen that dates from the late 19th or early 20th century in origins. 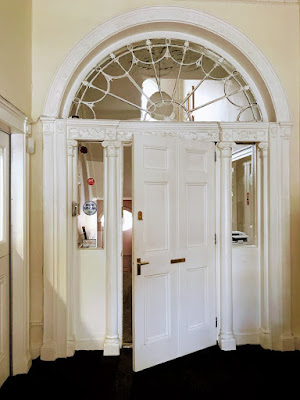 The door separating the entrance hall and the stair hall (Photograph: Patrick Comerford, 2017)

Separating the stair hall is an arched opening with an inner door-case comprising slender composite columns and responding quarter pilasters joined by an entablature with an enriched frieze that has a webbed fanlight above. There are plain sidelights and a replacement panelled timber door leaf.

The door opening to the ground floor front room has a fine architrave of flanking pilasters with rosettes that link with the lintel architrave. 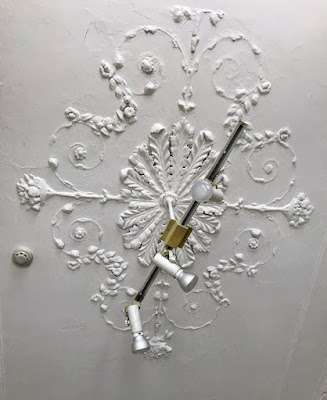 The ceiling in the entrance hall has low relief compartments with wheat husk swags tied with ribbon flanking an acanthus ceiling boss with scrollwork enriched by floral motifs. There is a low-relief modillion cornice running along the flat ceiling. 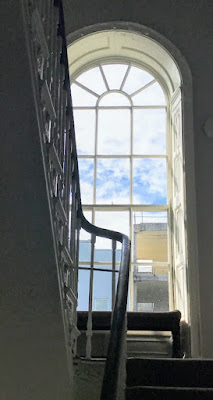 A round-arch window on a half-landing on the stairs (Photograph: Patrick Comerford, 2017)

The original primary staircase rises to the second-floor level. This has two half landings and a slender turned timber balustrade with an elaborate ground floor level curtail step. This staircase is open string with scrolled tread ends, which are either carved timber or composite.

At the second-floor level, an arched opening with a running mould archivolt springs from pilaster uprights and gives access to the private accommodation corridor.

The stair hall ceiling is enriched by low relief decorative plasterwork, typical of its period, forming an acanthus ceiling boss and outer floral and foliate oval tied by ribbon. A low relief frieze that runs along the ceiling is made up of a foliate frieze and an egg-and-dart course.

The half landings receive natural light from round-arched window openings with shutter box architraves comprising slender pilasters and archivolt, and having a panelled window back, flat-panelled shutters with applied bead mouldings, and a flat-panelled arch soffit. There are original six-over-six timber sash windows with segmental horns and a fanlight to the upper sash.

Because of meetings in the building, I did not get into the rooms upstairs this week. But I understand the three-bay piano nobile room has an arched inter-communicating opening to the rear room, with door leaves sliding into cavities in the dividing wall.

I am told this room has a flush chimney-breast with marble chimney-piece that has carved figurative panels, an Adam-inspired fire grate and a Victorian cast-iron fender. The window openings retain their original shutter boxes and flat-panelled timber shutters with applied bead mouldings. The ceiling is decorated with a sprayed feather boss with an elaborate low relief surround of scrolled foliations and an outer grape vine garland.

The first-floor rear room is similarly decorated with further enrichments to the ceiling. The chimney-piece is equally fine with a centrally-placed plaque depicting a Roman gladiator. There is a brass Regency fender with lion’s head masks that enrich the chimney-piece.

I did not get to the back of the building, but I understand the rear site still has the original coach house with a triangular pediment and an unusual triangular-shaped red-brick dovecote with oval windows set in brick surrounds. 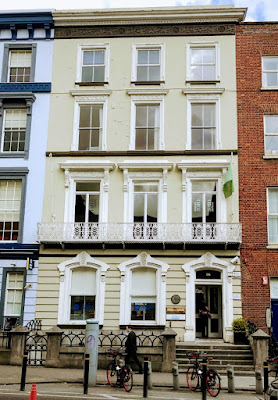 No 96 O’Connell Street … how many people pass by each day without imagining its architectural riches? (Photograph: Patrick Comerford, 2017)

I had the good fortune in 2015, while research the book on the Limerick Chamber with Dr Matthew Potter, to take a tour of this building with a lady who was born there 94 years ago and spent her childhood in the housr. We went from basement to attic as she described what used to be there.