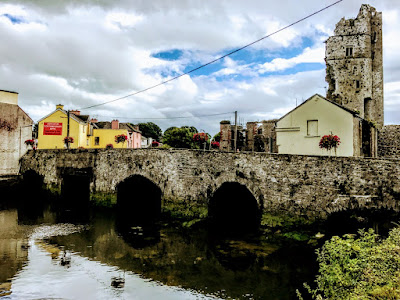 Summer colours at the Desmond Castle and the bridge over the River Deel at Askeaton, Co Limerick (Photograph: Patrick Comerford, 2017)

While I was trying to put the final touches to my sermons for Sunday next [6 August 2017], I took a break between the summer showers, and after buying the newspapers and having a double espresso as I read through The Guardian and The Irish Times, I went for a short afternoon stroll through Askeaton and along the banks of the River Deel.

Summer rain seems to add a distinctive translucent quality to the light in Ireland, and the pastel coloured shops and houses of Askeaton and the mediaeval walls of the Desmond Castle sparkled in the sunshine that was trying to break through the clouds this afternoon.

This weekend, Askeaton’s celebrated local tour guide and raconteur Anthony Sheehy is offering guided tours of the Desmond Castle, telling the historical tales behind its tall towers and crumbling crenellations. 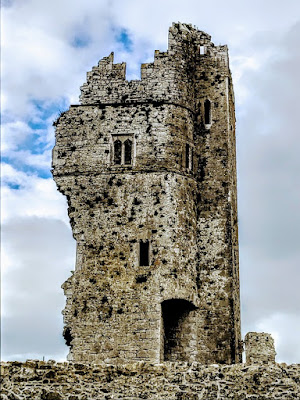 Anthony Sheehy tells the tales behind the tall towers and crumbling crenellations of the Desmond Castle in Askeaton, Co Limerick (Photograph: Patrick Comerford, 2017)

Anthony is a former butcher who lives by the banks of the River Deel. In his retirement, he has taken on the role of volunteer historian and tour guide during summer weekends.

He does it for free, on a voluntary basis, but has received glowing recommendations on TripAdvisor and in the Lonely Planet Guide, which describes him as the ‘resourceful local historian and expert Anthony Sheehy.’

Anthony knows every nook and cranny of the Desmond Castle, the adjoining Banqueting Hall and Hellfire Club and the former 14th century Franciscan Abbey nearby with its well-preserved cloisters. A full tour of Askeaton with him takes about 2½ hours, and he does it in a way that keeps his audience enthralled.

These tours could easily be longer yet remain equally enjoyable and educational at one and the same time. 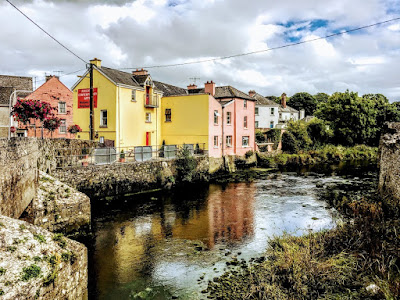 The castle is only open to the public at weekends in the summer at present because the Office of Public Works is continuing stabilisation works on it.

The tours leave from the tourist office in East Square, by the bridge over the River Deel. 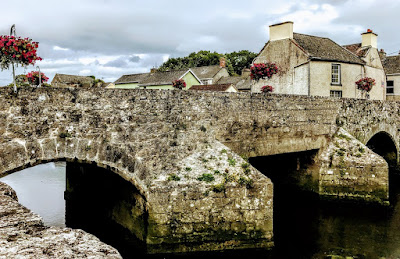 The bridge over the River Deel at Askeaton, Co Limerick (Photograph: Patrick Comerford, 2017)