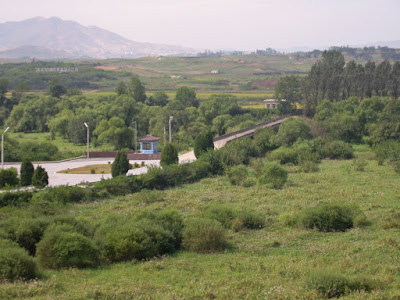 Twenty years ago, I awoke early on a Sunday morning to hear the news that Princess Diana had died in a car crash in Paris.

At the time, I was Foreign Desk Editor of The Irish Times, and I had risen in the early hours because I was catching a flight to London and on to Seoul to take part in a programme in South Korea as a Visiting Fellow at the Institute for Global Economics.

As a journalist, I knew the funeral of Lady Di was going to be a major story for all newspapers, and I had second thoughts about going to Korea.

Should I go, or should I stay?

I had an early morning conversation with senior colleagues. Going to Korea was not going to change how the funeral was covered in The Irish Times, but not going would mean missing an opportunity to engage with events on ‘the Cold War’s final frontier.’

At the time, there were horrific stories of a growing famine in North Korea. I travelled to the DMZ, the Demilitarised Zone that still separates North Korea and South Korea, met diplomats, politicians, generals and business leaders, attended receptions, and joined other journalists, as well as diplomats and politicians in an intensive programme.

As well as travelling to the tunnels and the border, and crossing the DMZ at P’anmunjom, I travelled throughout South Korea.

On the day of Princess Diana’s funeral, I was invited to the British Embassy, but instead I opted to be entertained and dined by the Irish Columban missionaries in Seoul. September is ‘All-Ireland’ season, and the Irish priests working in Korea were anxious for the context of political and sporting ‘context’ – call it ‘gossip’ if you like – from home. I spent that Sunday morning at the Anglican Cathedral in Seoul, the Cathedral Church of Saint Mary the Virgin and Saint Nicholas.

I returned with a diploma, with a letter from UN confirming I had absolved the United Nations of any responsibility should something untoward happen to me when I crossed the DMZ into North Korea, and with what journalists are tempted to regard as cutting-edge expertise in East Asian Affairs. Over the previous two decades I had been a visiting fellow on a programme in Japan, I had returned to Japan again, and I had been to both Beijing and Hong Kong twice, and I would return to China and Hong Kong many times after that.

But, of course, there are no experts on North Korea and what happens there.

Twenty years ago today, on 13 September 1997, The Irish Times published this feature: 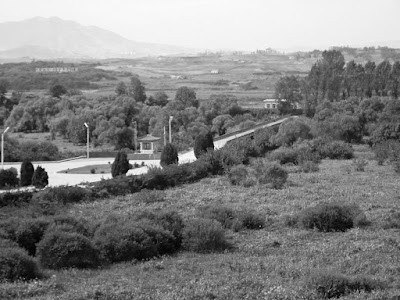 The Cold War is preserved perfectly on the border between North and South Korea, writes Patrick Comerford

The last Cold War frontier – the border between North and South Korea – stretches as far as the eye can see. The electrified fences, with their look-out posts and tanks, stretch for 248 km, across the full width of Korea, dividing the peninsula close to the 38th parallel.

Despite its name, the Demilitarised Zone (DMZ) is the most militarised zone in the world, with minefields, tanks, anti-tank walls, drop gates, a 3,000-volt electric fence and troops from both sides on constant alert. On the northern side, the countryside is bristling with camouflaged bunkers, tanks, artillery, nerve-gas and biological weapons shells, missile silos and landmines.

Driving into the DMZ, the tension is palpable. There are regular checkpoints, there are tight restrictions on South Koreans entering the zone, and during the lonely drive across Freedom Bridge, the one-lane wooden bridge high above the River Imjin, heavily armed soldiers below are on high alert. Should anything happen, there is no turning back.

Two Korean civilian villages remain inside the DMZ, one on each side of the dividing line.

On the northern side, Kijongdong is used by seasonal workers who come in from Kaesong, 12 km away, to harvest the fields, and by North Korean troops who keep up a barrage of 12-hour propaganda broadcasts directed across the border. The only sense of permanence is the world's largest flagpole, standing at 160 metres. But the 31-metre North Korean flag has a deadweight of 600lb, and seldom blows in the light, early autumn breeze.

The surrounding hillsides are covered with big bold white Korean letters proclaiming: ‘Self-reliance’, ‘We have the better system’, and ‘Follow the way of the leading star’ – a reference to Kim Jong-il, the North Korean leader who is watching his country edge closer to starvation and famine.

On the southern side, Taesongdong is known as ‘Freedom Village’. There the villagers are among the most prosperous people in South Korea: they pay no taxes, face no conscription, farm over four times the land available to other families, and have an average income of $82,000 a family. But they face restrictions on their freedom too: they must be out of their fields by dark, and locked up in their homes by 11 p.m. each evening.

On the southern side, visitors are taken to the Bridge of No Return, the last remaining road link across the peninsula, and the nearby site of a yellow poplar tree, where two Americans were hacked to death by North Koreans using axes in 1976.

P’anmunjom, an hour’s drive from Seoul, the southern capital, is the truce village but this is still a region that teeters on war. Each day, both sides meet inside the Military Armistice Commission (MAC) Building which straddles the border. Outside, a thin line of cement on the ground marks the dividing line between North Korea and South Korea. Inside the building, the doors are slammed shut on the opposing side before tour groups are ushered in.

Inside, it’s impossible to resist the temptation to walk around the dividing table and cross the border marked by the microphone cables. Outside, North Korean soldiers press their expressionless, grim faces against the cold window panes. There is no contact, no greeting, no sense of humour to break the ice in this Cold War drama.

If the DMZ makes one ironic contribution to the quality of life decades after the armistice, then it is the environmental paradise created in a 4km-wide zone sealed off from all human beings for 44 years. Safe from human predators and hunters, preserved from the industrial and commercial developments that have sprung up in South Korea’s booming economy, the DMZ is one of the rarest temperate habitats in the world. Siberian tigers have been sighted in the DMZ. It is home too to a large flock of Manchurian cranes.

Yesterday, in a gesture of goodwill towards the United States, North Korea handed over the remains of a US soldier, believed to have been killed in the Korean War between 1950 and 1953. The remains, in a simple aluminium coffin draped with a UN flag, were handed over by North Korean soldiers to a UN honour guard and at the end of a brief ceremony at P’anmunjom.

The bodies of more than 8,100 Americans who died in the Korean War have never been recovered. The US still has 37,000 troops stationed in South Korea, and yesterday's goodwill gesture came a day after North Korea agreed in Beijing to hold bilateral talks with the US in New York next week and to attend four-party talks with China, South Korea and the US.

For the first-time visitor to the South Korean capital, Seoul appears detached from the Cold War's last remaining tensions. But the border at P’anmunjom is less than an hour’s drive away – and technically, North Korea remains at war with South Korea.