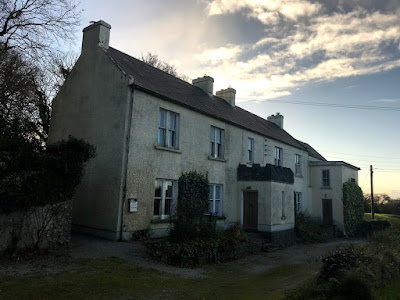 The former Barracks played an interesting role in the history and social development of Askeaton (Photograph: Patrick Comerford, 2017)

After two busy weeks that included four or five days visiting Bologna, Ravenna, Rimini and San Marino, and some working days in London, Lichfield and Birmingham, I have been back in Askeaton, Co Limerick, since the weekend.

These are busy days, preparing for Advent and Christmas. But there are also beautiful, crisp winter days, with clear blue skies and low setting suns that create days that are as bright as summer.

They are good days for walking, and yesterday afternoon I strolled up Barrack Lane, behind East Square in Askeaton, to see the former barracks and dispensary, a building that is over 200 years old and an interesting example of Askeaton’s pre-Victorian architecture.

The Barracks is within walking distance of the shops, schools, and pubs in Askeaton, standing on an elevated site above the east bank of the River Deel. Yet it is in a part-hidden and almost secluded rural environment off Barrack Lane. This house has played a role in the history and social development of this part of Co Limerick as a Royal Irish Constabulary (RIC) barracks. 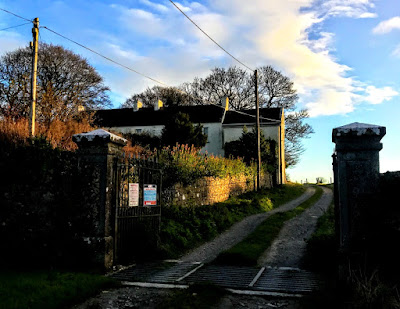 The Barracks stands on a secluded but elevated site above the castle and the town (Photograph: Patrick Comerford, 2017)

The Barracks stands on an elevated but discreetly secluded site that once provided the police with a tactical location, giving them clear views across to the castle and above the town. 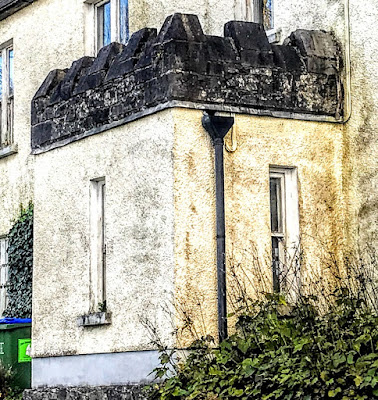 The simple façade, which is typical of functional buildings like this, is enhanced by the ornate porch, and the rubble limestone castellations on the porch that add to the curiosity value of the house. The house still retains many of its original features, including the timber sash windows, the slate roof and the boundary walls.

The house has a pitched slate roof with rendered chimneystacks, and the lean-to has a flat roof. There are rendered walls and the square-headed openings have bipartite one-over-one pane timber sliding sash windows and painted stone sills. 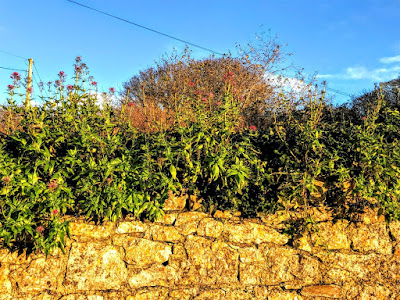 The rubble limestone boundary walls have rubble cappings, and there is a single-leaf cast-iron gate on the west side at the front of the house.

Today, this house is regarded as having regional architectural, historic and social importance. In recent decades, it has been converted into four separate apartments and there are two on the market available to rent at the moment. 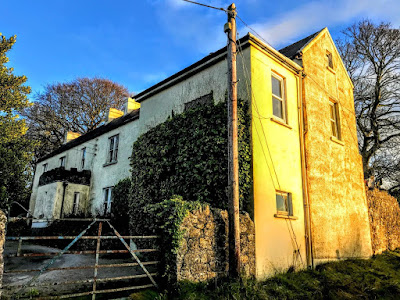 The Barracks and its cast-iron gate seen from the west side (Photograph: Patrick Comerford, 2017)