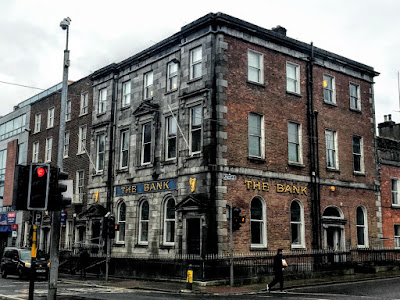 The Bank stands on the site of the short-lived Saint George’s Church, once on the corner of George’s Street and Mallow Street (Photograph: Patrick Comerford, 2018)

In my search for the churches of Limerick, I have also come across the sites of churches that are standing no longer.

When the mediaeval Saint Michael’s Church was destroyed in the mid-17th century, it was not rebuilt, and the Church of Ireland parish was left without a church building for over 100 years.

In the 1760s, work began on building a new church at the corner of George’s Street with Thomas Street and Bedford Row. The planned church was to have a pivotal position at the centre of a polygonal piazza and would have been visible from the river. This might have given the street a vista similar to that created by Saint George’s Church in Hardwicke Place, Dublin.

The foundation stone was laid in 1767, and the new church was planned as an octagonal building. The octagonal outline for the church can be seen in Christopher Colles’s map of Newtown Pery in 1769.

The map does not include the Crescent, first known as Richmond Place, nor does it include Pery Square. The location of the new church in the centre of the new main thoroughfare, to be known as George’s Street (now O’Connell Street), reflected the place of the Church of Ireland in Georgian society. The name of the church and the street were chosen to honour King George III and not the English patron saint. 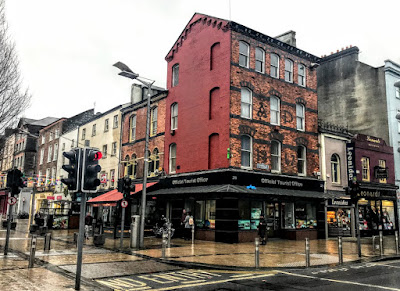 The original site on George’s Street for Saint George’s Church was at the junction with Thomas Street and Bedford Row Bank (Photograph: Patrick Comerford, 2018)

The new church would have served the original residents of Newtown Pery. But, for some unknown reason, the church was never built at the first chosen location. The site was changed to a place further south, originally surrounded by green fields, as can be seen on Sauthier’s Map of Limerick in 1786.

The unfished church was dismantled and the materials from the site were reused as the Pery family built and endowed Saint George’s Church on the corner of George’s Street and Mallow Street.

Saint George’s was completed in 1789-1791 at a cost of £507. It, was a modest building and was never intended to serve as a parish church. In Church Law, it was a chapel of ease to Saint Mary’s Cathedral. It was an interim solution for the new suburbs being developed in Newtown Pery at the turn of the 18th and 19th century by the Pery family. The Archdeacon of Limerick, the Ven William Wray Maunsell, remained the Rector of Saint Michael’s, and so a curate was appointed to Saint George’s, with the curate’s stipend paid by the Earl of Limerick.

The new church was described as a plain, commodious building that could seat 300 people, and its lofty east window once belonged to the old Franciscan Abbey in Limerick. It was called the Round Church, and at first it was in the middle of a green field.

At first it was surrounded by green fields. Later, the map of ‘Part of South Prior’s Land’ (1823) and McKern’s Map (1827) place it at the junction of George’s Street and Mallow Street.

But the church only last for about 40 years. It was demolished in 1831, as Saint Michael’s Church was being built on the corner of Barrington Street and Pery Square. Both the Limerick Evening Post and Clare Sentinel reported on 9 September 1831 that ‘St George’s Church Limerick is to be forthwith taken down and on its site will be erected an edifice for transacting the business of the Provincial Bank.’

But once again there was no Church of Ireland church in the parish, apart from the privately-owned Trinity Episcopal Church in Catherine Street. While the rector of the parish had the spiritual care of the parishioners, they were without a church building. Some of the parishioners met in the Primitive Methodist chapel until 1843. However, the Methodists gave notice that year that they would withdraw the privilege grated to Saint Michael’s parishioners.

An application was made to the Church Commissioners and a sum of money was granted to complete the unfinished church. By Act of Parliament, the Revd Pryce Peacock, who was the curate of Saint George’s and lived nearby in the Crescent, was appointed the first curate of Saint Michael’s.

Today, the former Provincial Bank building is the Bank Bar and Restaurant at the corner of 63 O’Connell Street and 1 Mallow Street. This landmark building is in good condition and has a very finely detailed façade with historic windows and glass. The side elevation blends successfully with Mallow Street, and ties the two streets together seamlessly. Much of the interior is original and clearly demonstrates a good change of use without the loss of architectural features.

Although the building is later than many of the Georgian buildings in this part of Limerick, the composition of its formal façade and its sympathetic proportions add variety and interest to the building. 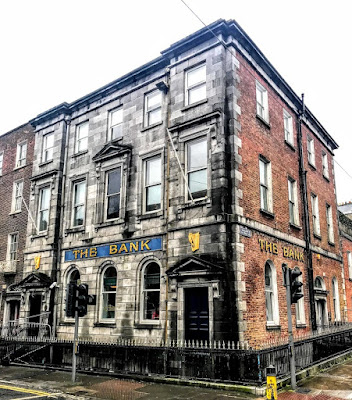 The Bank on O’Connell Street is later than many of the Georgian buildings in this part of Limerick and was designed by James Pain (Photograph: Patrick Comerford, 2018)