Following the Stations
of the Cross in Lent 3:
Longford 1, Jesus is
condemned to death 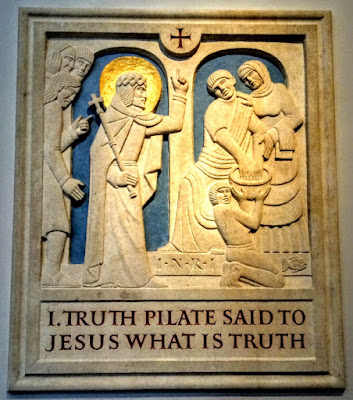 The idea for this series of morning Lenten meditations came from reading about Peter Walker’s new exhibition, ‘Imagining the Crucifixion,’ inspired by the Stations of the Cross, which opened in Lichfield Cathedral the day before yesterday, Ash Wednesday [14 February 2018], and continues throughout Lent.

For the next two weeks, I am looking at the 14 Stations of the Cross in Saint Mel’s Cathedral, Longford, sculpted by Ken Thompson in Bath stone with chisel and mallet, with lettering inspired by the work of Eric Gill and haloes picked out in gold leaf.

Station 1, Jesus is condemned to death

In this station, Christ is central figure, standing by a pillar in Pilate’s Court – perhaps this is the pillar at which he has been scourged, but the arches on each side give it a shape that reminds us that we are on the way to the Cross. Christ is holding a reed or rod in his hand, has a simple robe over his shoulders and has a crown of thorns on his head, all part of the ritual in which he was mocked and scorned after being brought before Pilate (Matthew 27; 28-30; Mark 16: 17; John 19: 2; cf Luke 23: 11).

Behind him, three figures are pushing him forward to face trial. Perhaps they stand in contrast to the three Wise Men who visited Christ at his birth.

Pilate is seated, washing his hands (see Matthew 27: 24) in a bowl held up by servile, kneeling slave. Pilate’s wife looks over his shoulder, as if to warn him not to be involved in this process, but by holding a towel over arm she indicates that she too is party to what is happening, however reluctant she may be (see Matthew 27: 19).

On the pavement below, are the initials INRI (Iesus Nazarenus, Rex Iudaeorum), ‘Jesus the Nazarene, King of the Jews,’ the inscription that Pilate had written in Hebrew, Latin, and Greek and put on the Cross (John 19: 19).

Beside this Latin acronym, Thompson has carved a fish: the Greek acronym ΙΧΘΥΣ (ιχθυσ (ichthus) means fish and was the fish was used by early, persecuted Christians to symbolise the phrase Ἰησοῦς Χριστός, Θεοῦ Υἱός, Σωτήρ (Jesus Christ, Son of God, Saviour).

The inscription in terracotta capital letters below the panel reads: ‘Truth Pilate Said To Jesus What is Truth’ – Pilate asked him, ‘What is truth?’ (John 18: 38). 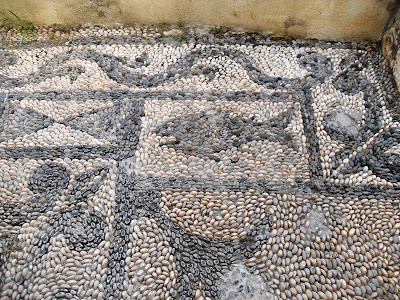 The Ichthus symbol remains discreetly unnoticed in the pebble mosaic of a courtyard in the former Church of the Annunciation in Kaş in southern Turkey … the church has been converted into a mosque (Photograph: Patrick Comerford, 2011)