A ‘Storm in a Teacup’ in the snow
or a promise of summer sunshine? 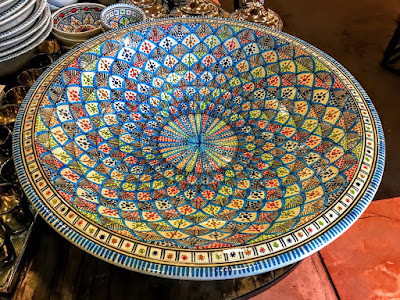 Since moving from Dublin a year ago, I have come to realise that West Limerick has its own microclimate. The rain is much heavier and more persistent, on one hand, but on the other I have escaped the worst of both ‘Hurricane Ophelia’ and the combined onslaught of the ‘Beast from the East’ and ‘Storm Emma.’

Although the snow-filled slippery slopes of north Kerry forced the cancellation of Morning Prayer in Tarbert on Sunday, the last vestiges of snow have all but melted away in both Askeaton and Rathkeale.

So, I was taken aback by reports of snowdrift in Co Wexford, which is supposed to be the ‘sunny south-east’ and was surprised yesterday on my way to Dublin by the amount of snow on fields and roads, which seemed to increase in depth and density the nearer I got to Dublin.

The snow had forced two of us to give up on plans for a flight from Shannon to Warsaw on Sunday afternoon, for a short, three-day city break in the Polish capital. But I have a hospital appointment in Dublin tomorrow morning (Thursday), and I still needed to get to Dublin at some stage this this week.

Two of us set out from Askeaton early yesterday afternoon, and we stopped for a late lunch at the Avoca café in Rathcoole. The place was quiet, perhaps snow is still deterring people in the greater Dublin area from moving out. But it was captivating to see the mountains still covered in snow, and the terrace closed off because tables were still covered in the remains of snow drifts.

A storm in a teacup? … in the Avoca Café in Rathkeale (Photograph: Patrick Comerford, 2018)

The ceiling decorations in Avoca in Rathkeale show teacups in ever-decreasing circles. But it was obvious that the weekend snowstorms were no ‘storm in a teacup.’

Downstairs, the displays of Tunisian earthenware evoked hopes for a warmer clime and sunnier, summer weather.

The sad state of Lidl in Fortunestown (Photograph: Patrick Comerford, 2018)

Later, as we travelled through west Dublin, we saw the sad remains of Saturday night’s events at the Lidl supermarket in Fortunestown.

There is no such thing as victim-less crime: some workers may lose their jobs, others may be forced to move to keep their jobs; investors may be deterred; and the greater Tallaght area suffers from being labelled with the consequences of this vandalism.

The vertical pole in my photograph shows the extent of damage to this supermarket.

People have laid flowers in the snow outside the hoardings that have been erected to protect the site. They are like flowers scattered on a grave. There is much to mourn here, and people in west Dublin have found a way in the snow to mourn what happened last weekend and to show in the snow their grief.

Hopefully, there are happier scenes to see today. 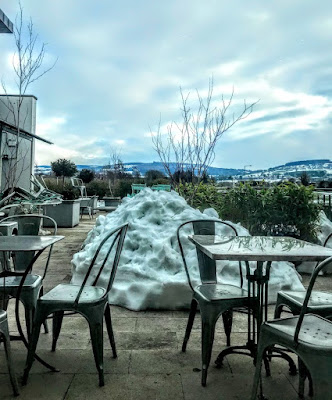 Snow drifts on the terraces at the Avoca Café in Rathcoole (Photograph: Patrick Comerford, 2018)