Following the Stations
of the Cross in Lent 37:
Lichfield 5: Simon 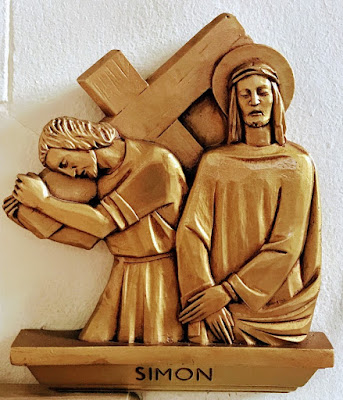 Simon of Cyrene is mentioned in three of the four Gospels as the man forced by the Roman soldiers to help Jesus carry his cross. He was from Cyrene in north Africa. But was he a black African, or was he like so many others there who were of Greek, Roman or Jewish descent?

Whether Simon was a Jew or a Gentile is perhaps irrelevant. His action reminds me of the ‘Righteous Among the Nations,’ an honour used to describe non-Jews who risked their lives during the Holocaust to save Jews from extermination by the Nazis. The term originates with the concept of righteous gentiles, a term used in rabbinic literature to describe non-Jews (ger toshav) who abide by the Seven Laws of Noah.

The Righteous are defined as non-Jews who risked their lives to save Jews during the Holocaust. Only a Jewish party can make a nomination. Helping a family member or a Jew convert to Christianity is not a criterion for recognition. Assistance has to be repeated and substantial, and it has to be given without any expected financial gain.

The largest number of Righteous is from Poland (6,706). Mary Elizabeth Elmes (1908-2002) from Cork was the first Irish person to be honoured among the Righteous by Yad Vashem. She saved at least 200 Jewish children under the age of 12 by smuggling them over the border between France and Spain in the boot of her car. There is also an application for another Irish person, Monsignor Hugh O’Flaherty, who rescued 6,500 Prisoners of War and Jews in Rome.

The Righteous are honoured with a feast day in the liturgical calendar of the Episcopal Church in the US (16 July), and a Righteous from Italy, Edward Focherini, was beatified by the Roman Catholic Church in 2013.

Holy God,
Holy and mighty, Holy immortal one,
Have mercy on us. 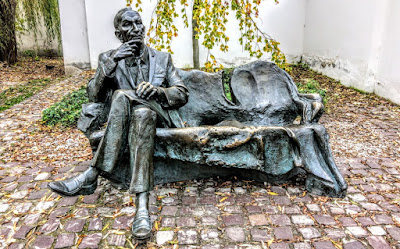 A memorial beside the Remuh Synagogue in the Jewish Quarter in Kraków to Jan Karski (1914-2000), who reported to the allies on the destruction of the Warsaw Ghetto and the extermination camps (Photograph: Patrick Comerford)