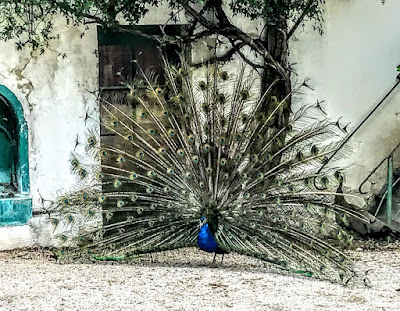 A peacock shows his pride in the Domaine de Rombeau, near Rivesaltes (Photograph: Patrick Comerford, 2018)

My visit to the Perpignan area in the south of France last week seemed to begin and end in vineyards in Roussillon.

After arriving at Perpignan on Tuesday afternoon, three of us stopped on our way to the coast at Domaine Lafage, where Jean-Marc and Eliane Lafage farm 160 hectares of vines on their estate between Perpignan and the Mediterranean, where a significant proportion of their vines are well over 50 years old.

Their estate is farmed organically, and their wines range from refreshing whites to concentrated reds.

On Friday afternoon, after visiting the Forteresse de Salses, which once guarded the border between Spain and France, we stopped off at the Domaine de Rombeau, near Rivesaltes, where the estate has been in the hands of the de La Fabrègue family for centuries.

These wines are acclaimed by the French and international media, are mentioned by the main guides, and have regularly received numerous regional and national awards over the decades. Much of the wine produced here is sold directly at the wine cellar, and in the restaurant there attracts more than 10,000 customers a month. 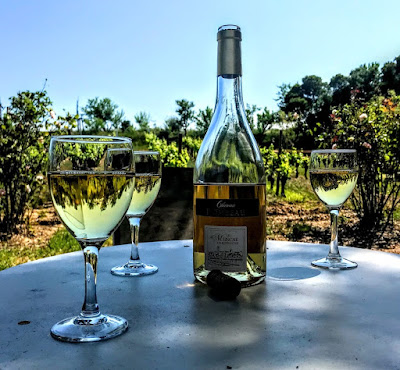 Enjoying a taste of summer and a snatch of heaven in the Domaine de Rombeau at the end of last week (Photograph: Patrick Comerford, 2018)

It was one of those sun-kissed afternoons that seem like a snatch of heaven as three of us sat by the vines and the groves, sharing a bottle of Le Muscat de Rivesaltes that seemed to be a taste of summer sunshine.

A large number of peafowl – peacocks and peahens – walk around the domain freely. Peafowl are forest birds that nest on the ground, but roost in trees. They are terrestrial feeders, and domesticated peafowl enjoy protein rich food, including larvae that infest granaries, different kinds of meat and fruit, as well as vegetables, including dark leafy greens, broccoli, carrots, beans, beets, and peas. This makes them appropriate birds to keep in an organic vineyard, acting as a natural protection for the vines. 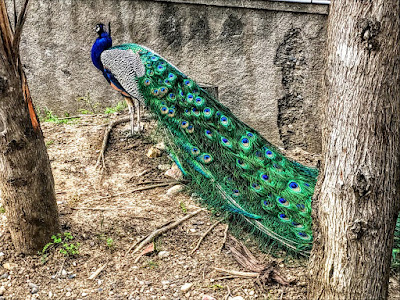 A peacock in the vineyard in the Domaine de Rombeau … soon they were eating from my hand (Photograph: Patrick Comerford, 2018)

They are curious birds too, always ready to respond to the presence of people. Despite their innate independence, they can appear to be both disdainful and socially curious at one and the same time.

With this natural curiosity, sociability and their feeding habits, it was easy to entice the peacocks and peahens with the nuts and raisins that accompanied our wine. To the surprise of the other two in our group, I soon had peacocks and peahens eating from my hand as we sat at the table, and walking around us, like cats seeking to make sense of the afternoon visitors.

Similarly, I found it easy to attract the attention of peacocks when I visited the Monastery of Vlatadon in Thessaloniki at Easter last month. 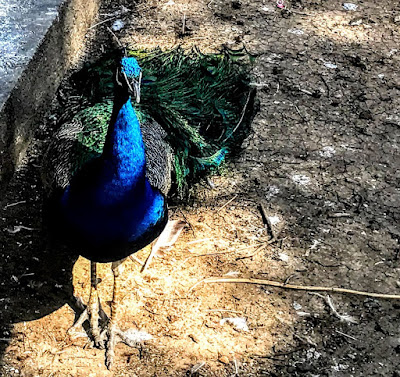 A peacock in the Monastery of Vlatadon in Thessaloniki at Easter (Photograph: Patrick Comerford, 2018)

I have long been fascinated by peacocks. When I was living in Wexford in the mid-1970s, I went on a long walk in the sunshine one Sunday afternoon and came across a farm near Piercestown, 7 km south of Wexford town, where there was a large number of peafowl in the farmyard.

I turned into work at the Wexford People the following morning, enthusiastic about offering a feature on what appeared to be an exotic peacock colony. But everyone else seemed to know about it and was dismissive, and no-one shared my enthusiasm.

The feature was never written – but then, it was in the days when newspapers were in black and white, and any photographs could never have done justice to the sight that delighted me that summer afternoon.

Perhaps my curiosity about peacocks dates back to an early stage in life, when I was first interested in the family tree and realised that peacocks decorate the crests in the coat-of-arms of both the Comerford and Comberford families: a peacock’s head in the case of two branches of the family, and a peacock in his pride in a third branch.

They are part of the heraldic symbolism of the families not because of some inflated sense of pride, but because the peacock is a symbol of the Resurrection.

In ancient Persia and Babylon, the peacock was associated with Paradise and the Tree of Life and was seen as a guardian to royalty, and was often engraved upon royal thrones.

These birds were not known to Greeks before the conquests of Alexander the Great. Aristotle, who was Alexander’s tutor, refers to the peacock as ‘the Persian bird.’ In classical Greece, it was believed that the flesh of peafowl did not decay after death, and so the peacock became a symbol of immortality.

This symbolism was adopted in early Christianity, and many early Christian paintings and mosaics show the peacock. The peacock is still used in the Easter season, especially in the east. The ‘eyes’ in the peacock’s tail feathers symbolise the all-seeing God and – in some interpretations – the Church. 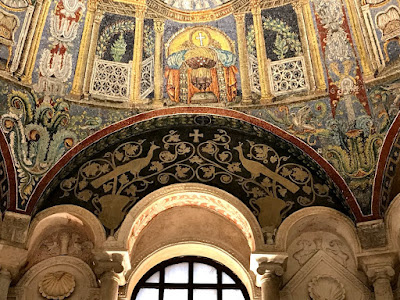 Peacocks and peacock feathers as symbols of the Resurrection in mosaics in Ravenna (Photograph: Patrick Comerford, 2017)

A peacock drinking from a vase is used as a symbol of a Christian believer drinking from the waters of eternal life. The peacock can also symbolise the cosmos if one interprets his tail with his many ‘eyes’ as the vault of heaven dotted by the sun, moon, and stars. The peacock is associated with immortality, and in iconography the peacock is often depicted next to the Tree of Life.

Peacocks often appear in early Christian art as a symbol of the Resurrection and Eternal Life.

Some commentators have written that the reference in the Book of Revelation to four living creatures ‘full of eyes in front and behind’ before the throne is inspired by images of the tail of the peacock (see Revelation 4: 6). Other writers also say, ironically, that the peacock is a symbol of humility, since he has great beauty, yet hides it all behind himself.

The peacock has been a symbol of immortality from as early as the third century on the walls of the catacombs of Rome. Later, peacocks appear in mediaeval paintings and manuscripts and in decorative motifs on churches and buildings, and even among the animals in the stable at Christ’s nativity.

One of the best known examples is found in the Adoration of the Magi, a tondo or circular painting dating from 1440-1460 and ascribed to both Fra Angelico and Filippo Lippi. It was recorded in the Palazzo Medici Riccardi in Florence in 1492, and is now in the National Gallery of Art in Washington DC. In this work, a large peacock perches on the top of the stable, looking over his shoulder.

The peacock may have been given a prominent place in this work because Giovanni di Cosimo de Medici (1421-1463) had adopted a peacock as his heraldic symbol, along with the French motto Regarde-Moi (‘Watch me’). This may help to explain how the peacock was popularised as a symbol in late mediaeval heraldry, as seen in the coats-of arms of the Comberford and Comerford families, as well as the Arbuthnot family and the family of the Dukes of Rutland.

As we sat sipping the Domaine de Rombeau, enjoying that snatch of heaven on Friday afternoon, I realised that the Easter season was coming to an end, and that Ordinary Time would begin in the Church Calendar today [21 May 2018], the day after Pentecost. But I found myself thinking of how the English poet William Blake (1757-1827) had written in The Marriage of Heaven and Hell (1793): ‘The pride of the peacock is the glory of God.’ 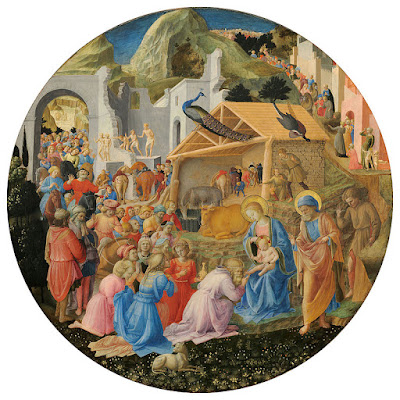