‘Radiant Faith’ in the Diocese
of Limerick and Killaloe 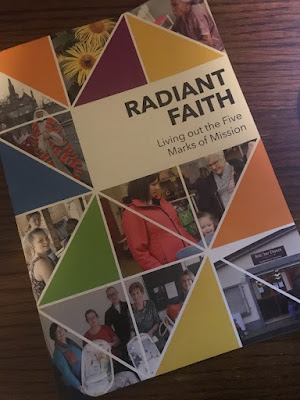 ‘Radiant Faith’ … report on mission launched at the General Synod of the Church of Ireland in Armagh this week (Photograph: Patrick Comerford, 2018)

Working with a
community in need
of healing

Rathkeale was once the largest market town in West Limerick. Today, this is the town with the largest proportion of the population identified as Travellers. The number of Travellers and the communal tensions associated with Rathkeale have drawn extensive media attention, giving rise to headlines that fail to express many positive aspects of life in the town.

Travellers assert that they are often the victims of racism and discrimination, at both an institutional and a communal level. On the other hand, many residents of Rathkeale mourn the loss of character of the town they knew and still love.

The Rathkeale Pre-Social Cohesion Project is an unusual and unique example of mission in the Diocese of Limerick and Killaloe. The project was set up with the support of the Roman Catholic Church, the Church of Ireland and the Methodist Church.

Supported by West Limerick Resources and the local authorities, the project seeks to be the voice of faith communities on issues of justice in a place of division that has yet to recognise or accept the need for healing and reconciliation.

This long-term project meets two of the five marks of mission in the Anglican Communion: to respond to human need by loving service; and to seek to transform unjust structures of society, to challenge violence of every kind and to pursue peace and reconciliation.