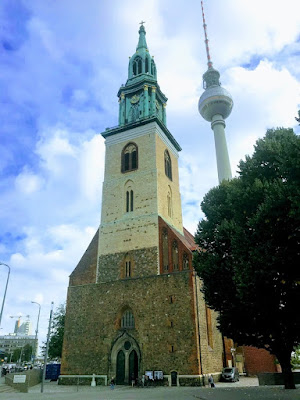 The Marienkirche near Alexanderplatz is the seat of the Bishop of Berlin and the centre of the diocese (Photograph: Patrick Comerford, 2018)

But the seat of the Bishop of Berlin and the centre of the diocese is Saint Mary’s Church, or the Marienkirche, on Karl-Liebknecht-Straße, formerly Kaiser-Wilhelm-Straße, near Alexanderplatz, in central Berlin.

The Marienkirche is the oldest surviving parish church in the city of Berlin that is still in use as a church. It is situated beside the TV Tower or Fernsehturm and among the high-rise blocks built in the East German era.

The building of the Marienkirche began shortly after Berlin was granted town privileges in 1230. It was probably built some time ca 1250-1280 as a parish church for the newly established town – the exact date is not known, but it was first mentioned in chronicles in 1292.

The Marienkirche is built on foundations made of fieldstones, and the church itself is built with red bricks in the local Brick Gothic style. The internal architectural design is based on the design of the churches of the mendicant orders, who inspired many town churches at the time.

The oldest parts of the church are made from granite, but most of it is built of brick, giving it its characteristic bright red appearance. This was deliberately copied in the construction of the nearby Berlin City Hall, the Rotes Rathaus.

The Church of Saint Mary was damaged by one of the many fires in Berlin in the late 14th century and it was rebuilt in a modified form.

The church tower, made of Rüdersdorf limestone, was repaired and modified from the 15th century. 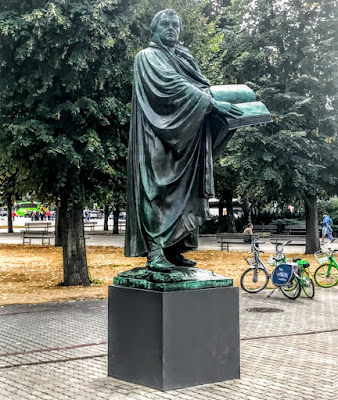 The statue of Martin Luther outside the Marienkirche (Photograph: Patrick Comerford, 2018)

The mediaeval Marienkirche has been a Lutheran church since the Reformation, and there is a striking statue of Martin Luther outside the church.

Michael Mathias Smids redesigned the church in the Baroque style in 1663. The imposing, decorated pulpit was carved from alabaster by Andreas Schlüter in 1703. In addition, the church has a massive pipe organ over the main door.

Baron Carl Hildebrand von Canstein, founder of the oldest Bible society in the world, the Cansteinsche Bibelanstalt, was buried here in 1719.

The baroque altar was designed by Andreas Krüger around 1762, with paintings by Christian Bernhard Rode.

A complete neo-Gothic overhaul was carried out in 1789 by the celebrated master builder Carl Gotthard Langhans. His best-known work is the Brandenburg Gate on Pariser Platz. He also designed the large metal dome in the Baroque and neo-Gothic styles that crowned the bell tower in 1790.

The church has been a united Protestant church since the Prussian Union of Churches in 1817.

The architecture of the building is now largely composed of comparatively modern restoration work that took place in the late 19th century and in the post-war period.

The church has a number of important works of art inside, some dating back to the 15th century. Many of these were collected from other churches that were either destroyed during World War II or degraded over time because of age.

The painting Der Totentanz (The Dance of Death), painted in 1475, was found in 1860 beneath a layer of whitewash in the church’s entrance hall.

This fresco is more than 22 metres long and 2 metres high, and dates from a time when the plague in Berlin caused many deaths. The remaining fragments, displayed behind glass, depict the dancing dead representing people from all walks of life.

Before World War II, the Marienkirche was in the middle of a densely populated part of the district of Mitte, and was in regular use as a parish church. But the church was heavily damaged by Allied bombs during World War II.

After World War II and the division of Berlin and Germany, the Marienkirche was in East Berlin. The church was restored by the East German authorities in the 1950s, and the area around the church was cleared of ruined buildings.

The cross on the top of the church is said to have annoyed the Communist rulers of East Germany – its shape was always reflected in the windows of the television tower or Fernsehturm, built in 1965-1969 by the East German government as a symbol of both Berlin and of East Germany.

The oldest church in Berlin is the nearby Saint Nicholas’ Church or the Nikolaikirche in the area known as the Nikolaiviertel or Nicholas quarter. The Nikolaikirche was built in 1220-1230, but held its last service 80 years ago on Reformation Day, 31 October 1938. The church building served was handed over to the government, and the congregation merged with that of Saint Mary’s Church.

The roof and the tops of the towers of the Nikolaikirche were destroyed by Allied bombing in World War II, and the vaults and northern pillars collapsed in 1949. The church has since been rebuilt and now mainly serves as a museum and as an occasional concert venue.

Today, Marienkirche is the church of the Bishop of the Evangelical Church of Berlin-Brandenburg-Silesian Upper Lusatia, while the Berliner Dom or Berlin Cathedral is under joint supervision of all the member churches of the Union of Evangelical Churches. It is also used for Anglican services on Sunday evenings.

The Marienkirche, once hemmed in by other buildings, now stands in the open spaces around the Alexanderplatz, overshadowed by the Fernsehturm, yet it retains its mediaeval atmosphere in the middle of modern high-rise buildings.

The red brick of the Marienkirche was copied in the construction of Berlin City Hall, the Rotes Rathaus (left); the towers of the Nikolaikirche (right) are the remains of Berlin’s oldest church; both seen here from the Dome walk of the Berliner Dom (Photograph: Patrick Comerford, 2018; click on image for full-screen view)

Dear Canon Comerford,
if you're still in Berlin at this moment... May I suggest you pay a visit to St. AFRA in Berlin-Gesundbrunnen (Graunstraße 31, 13355 Berlin-Mitte). It is home of the small catholic "Institut St. Philipp Neri". Sundays: High Mass at 10.30 am and on Weekdays: Holy Mass 6 pm. A beautiful and well preserved small church and typical of the Catholic churches of the time as the protestant Prussians did not allow Catholic churches to be detached buildings. Certainly the place to be if you're fond of solemn Catholic liturgy, sometimes with a touch of Anglicanism as well, as the parish priest, Propst Goesche, is very anglophile. :-)
https://de-de.facebook.com/Institut-St-Philipp-Neri-Berlin-ISPN-318027294923983/
www.institut-philipp-neri.de
Kind regards, Ulrich