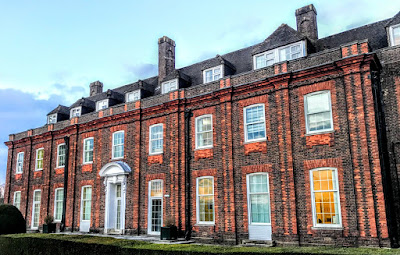 The Kairos Retreat and Conference Centre was established in 1995 (Photograph: Patrixk Comerford, 2018)

I am in London at a two-day meeting of the trustees of the Anglican mission agency USPG (United Society Partners in the Gospel), and then travelling on to Lichfield tomorrow evening before taking part in a day for USPG volunteers in Birmingham Cathedral. This afternoon, at the trustees’ meeting, I led the theological reflection or Bible study.

I arrived in London on an early morning flight from Dublin to Heathrow, and I am staying in the Kairos Centre, a retreat and conference centre in an urban oasis in south-west London, standing in acres of landscaped gardens close to the campuses of Roehampton University and overlooking Richmond Park.

The Kairos Centre is at 12 Roehampton Court, later known as Maryfield Convent, which was built in 1913/1914 to a Georgian design. The architect was Frank Chesterton, who also designed part of Hampton Court and Ibstock School.

The house was bought at auction with 11 acres of land by the Poor Servants of The Mother of God on 18 July 1927. The order was seeking new property as a novitiate because Saint Mary’s Convent in the High Street housed an orphanage and also the general leadership of the order, as well as postulants, novices and tertians, preparing to take final vows.

The main work in the house involved training of the novices. In September 1928, 15 postulants arrived and they became the first postulants to spend Christmas in Maryfield. Over the next 10 years, from 1928 to 1938, additions were made to the original building, including a kitchen, laundry, dining room and the large and beautiful chapel.

But once World War II broke out on 3 September 1939, all changed: there were identity cards and food rationing all over England, and the first bomb was dropped on London on 15 August 1940. It was often a nightly occurrence for air raid warnings to start at 9 or 10 p.m. and people had to head for air raid shelters and remain until the ‘all clear’ sounded, indicating that it was safe to return.

In 1941, Digby Stuart College was hit, and a Jesuit novice was killed in an air raid on 10 October 1941. Maryfield was now unsafe and the novitiate was moved to Corston near Bath.

On 18 February 1944, a basket of bombs landed on the roof of the original house in Maryfield, and within a few hours it was completely engulfed in flames.

When World War II ended in 1945, life gradually returned to normal and the novices returned to Maryfield.

The house was used by the order’s Generalate, Trustees and Novitiate in 1945-1974. From 1974 to 1995, The Novitiate was relocated to the top floor of the convent and the remainder of the house became a residential home for women with learning disabilities.

Part of the New Wing was refurbished in 1995 and became the present Retreat and Conference Centre which is known as the Kairos Centre. Meanwhile, the Generalate continues to have offices in the main building. 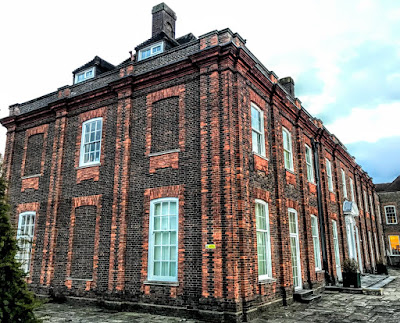 The original house at the heart of the Kairos Centre was designed by the architect Frank Chesterton (Photograph: Patrixk Comerford, 2018)