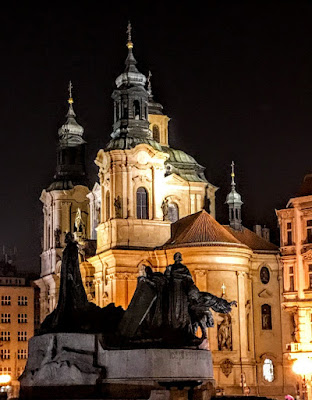 The Church of Saint Nicholas at night in the Old Town Square in Prague, with the statue of John Hus in the centre of the square (Photograph: Patrick Comerford, 2019)

As I strolled around the Old Town of Prague on Thursday afternoon [24 January 2019] week, I visited the Church of Saint Nicholas, on the corner of the Old Town Square, Pařížská Street and Franz Kafka Square. Its beautiful green baroque towers and dome can be seen throughout the old town centre.

This monumental church was built in 1732-1735 to designs by Kilián Ignaz Dientzenhofer, on the site of an earlier 13th century Gothic church, also dedicated to Saint Nicholas.

The church was the parish church of the Old Town and the meeting place until the Church of Our Lady Before Tyn the opposite side of the square was completed in the 14th century. 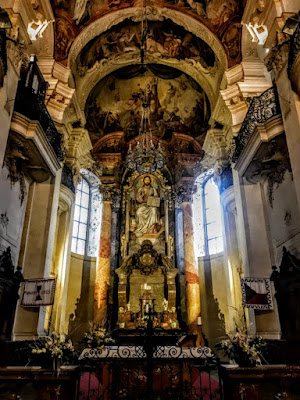 Inside the Church of Saint Nicholas in the Old Town Square in Prague (Photograph: Patrick Comerford, 2019)

After the Battle of the White Mountain in 1620, the church became part of a Benedictine monastery. The early mediaeval church was destroyed by fire, and the present church was completed in 1735, and its white façade decorated with statues by Antonin Braun.

But just a half century after the church was completed, the Emperor Joseph II closed all monasteries not engaged in socially useful activities in 1781, the church was stripped bare and the interior decorations were sold off.

The empty building was used as a granary for a while and then as a registry archive. The church returned to its original purpose in 1871 when it was used by the Russian Orthodox Church. During this Orthodox era, the splendid crystal crown chandelier, made in Harrachov glass works in northern Bohemia, was donated to the church by the Russian Tsar. 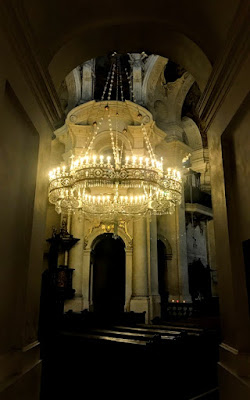 The chandelier was donated by the Russian Tsar to the Church of Saint Nicholas when it was an Orthodox Church (Photograph: Patrick Comerford, 2019)

The 20th century brought new decorations with neo-baroque style paintings, statues, and a life-size sculpture of Saint Nicholas was placed in the outside niche of the church.

During the Prague uprising in 1945, the church was used by the Czech partisans as a hidden site for Radio Prague after the main radio building was attacked by the Waffen-SS. 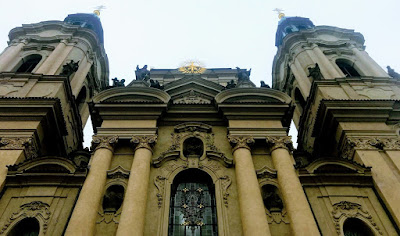 The baroque towers of the Church of Saint Nicholas in the Old Town Square in Prague (Photograph: Patrick Comerford, 2019)

The Czechoslovak Hussite Church began when a group of priests in former Czechoslovakia separated the Roman Catholic Church after World War I. The church could be described as neo-Hussite, and contains Protestant, Catholic, Eastern Orthodox and national elements.

It claims to have revived the traditions of to the Hussite reformers and acknowledges Jan Hus as its predecessor.

The forerunner of the church was the Jednota or Union of the Catholic Czechoslovak Clergy, founded in 1890 to promote modernist reforms in the Roman Catholic Church, including as use of the local language in the liturgy and voluntary rather than compulsory clerical celibacy.

The radical movement that resulted in the foundation of a new Church began in the Christmas season of 1919, when Christmas masses were celebrated in the Czech language in many Czechoslovak churches. 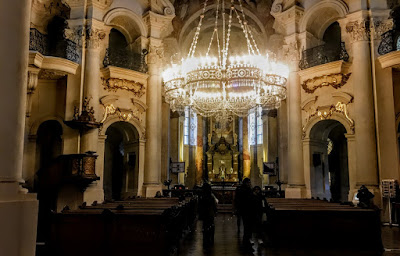 The altar and apse in the Church of Saint Nicholas (Photograph: Patrick Comerford, 2019)

The church was first formed in 1920 as the Czechoslovak Church by Dr Karel Farský (1880-1927), who became its first Patriarch and the author of its liturgy. It was well-supported by Czechoslovakia’s first president, Tomáš Garrigue Masaryk, a member of the Evangelical Church of Czech Brethren, the main Protestant denomination in what is now the Czech Republic.

After the split, amidst the post-war atmosphere of anti-Catholic agitation and euphoria about Czech independence, the Czechoslovak Church’s membership increased rapidly. In the first post-war census in 1921, 523,232 people claimed to be adherents of this church in what is today the Czech Republic. By 1930, membership had grown to 779,672.

At the beginning of the communist rule, the 1950 census recorded 946,497 members of the Czechoslovak Hussite Church. But under Communist rule, membership began to decline. 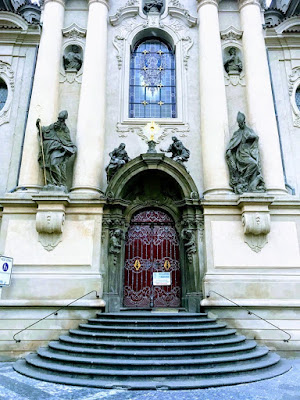 The main entrance to the Church of Saint Nicholas in the Old Town Square in Prague (Photograph: Patrick Comerford, 2019)

About 266 priests are in active ministry, of whom 130 are women. Candidates of ministry are prepared at the Hussite Faculty of Theology at Charles University in Prague.

From the beginning, the Hussite Church sought relations with the Serbian Orthodox Church and the Old Catholic Church, but also showed tendencies to a rationalist and Unitarian theology until 1958, when it adopted a creed based on the Nicene Creed. 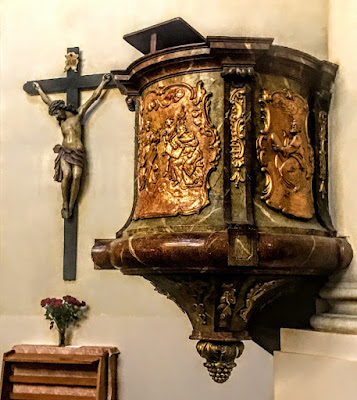 The pulpit and crucifix in the Church of Saint Nicholas (Photograph: Patrick Comerford, 2019)

The church draws its teachings from the traditional Christianity expressed in Patristic writings or the work of the Early Church Fathers, the first Seven Ecumenical Councils, the work of Saint Cyril and Saint Methodius, and Reformation traditions, especially Utraquist and Hussite theology.

The Czechoslovak Hussite Church recognises seven sacraments. Like some Lutheran and Presbyterian churches, it emphasises the freedom of conscience of individual believers, practices the ordination of women, and emphasises the equal participation of the laity in church leadership.

The liturgy has two forms that have much in common with the texts of the Roman Catholic Mass, but include elements of Luther’s German Mass and the Hussite tradition of the Utraquist mass. 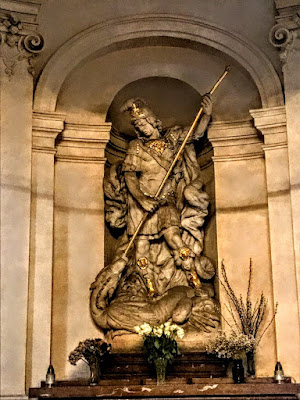 A statue of Saint George in the Church of Saint Nicholas (Photograph: Patrick Comerford, 2019)

Although saints are not venerated, images of saints can be seen in church decoration. In imagery used by the church, the chalice plays a major role, usually depicted in red, as it was used in the 15th century as a battle standard on the flags of the Hussites.

Bishop Jan Schwarz was the seventh Patriarch of the Czechoslovak Hussite Church (2001-2005). During his time in office, the church was divided between rival factions, with some refusing to accept his patriarchy and threatening division. He resigned when he was called before the church's Episcopal Central Council in 2005, and later joined the Religious Society of Czech Unitarians. The present, eighth patriarch, Bishop Tomáš Butta, was elected in 2006.

The church faces onto the Old Town Square and the Jan Hus Memorial. This huge monument depicts Hus with Hussite warriors and Protestants who were forced into exile 200 years after Hus in the wake of the lost Battle of the White Mountain during the Thirty Years’ War, and a young mother who symbolises national rebirth.

Jan Hus (1369-1415) was inspired by the teachings of John Wycliffe and was a key forerunner of the later Reformation in the 16th century. He criticised religious and moral decay in the Catholic Church, believed the Mass should be celebrated in the local language, rather than in Latin. Hus was finally condemned by the Council of Constance and burned at the stake in 1415, leading to the Hussite Wars.

Saint Nicholas Church can be visited every day except during Mass on Sundays. It is also a very venue for concerts of religious and classical music. 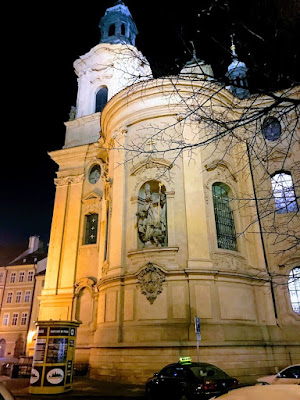