Martinstown House, a design
influenced by the cottage orné
fashion and Strawberry Hill 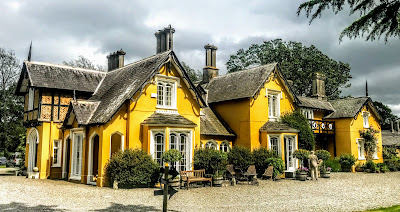 During the weekend, I visited Martinstown House, Co Kildare, one of the few Irish houses designed by the 19th century architect, Decimus Burton (1800-1881). This house, built in the 1830s at the edge of The Curragh, is an elegant gothic cottage surrounded by its own miniature park and set in delightful woodland, with an interior that has been beautifully furnished and decorated.

Martinstown House was originally part of the extensive estates of the Dukes of Leinster, and was completed by the Borrowes family in 1832-1840 as a cottage orné.

The cottage orné or decorated cottage style dates back to a movement of ‘rustic’ stylised cottages in the late 18th and early 19th century, when there was a fashion to discover a more ‘natural’ way of living as opposed to the formality of the baroque and neo-classical architectural styles. English Heritage defines the term as ‘a rustic building of picturesque design.’ These cottages often feature well-shaped thatch roofs and ornate timberwork. 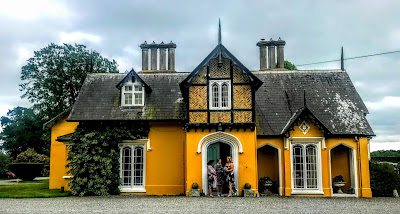 When it came to designing Martinstown House, Burton was inspired by Strawberry Hill House – often known simply as Strawberry Hill – the Gothic Revival villa in Twickenham built by Horace Walpole (1717-1797) in 1749-1776. It is the type example of the ‘Strawberry Hill Gothic’ style of architecture, and it prefigured the 19th century Gothic Revival. Parts of the house were designed by James Essex.

Martinstown House is a fine Strawberry Hill Gothic style cottage ornée in a peaceful setting on its own miniature park, with many fine old trees and a beautiful walled garden. This was originally a farmhouse in the 1730s, but today’s house was built in the early 19th century by Augustus Frederick FitzGerald (1791-1874), 3rd Duke of Leinster and a nephew of the 1798 leader Lord Edward FitzGerald (1763-1874).

The house was designed by Decimus Burton, one of the foremost English architects and urban designers of the 19th century. He worked in the Roman revival, Greek revival, Georgian and Regency styles.

Modern architectural historians, including Guy Williams (1990) and Dana Arnold (2004), say Burton’s contribution to architecture has been grossly underestimated in in the past because many of his works were attributed to Nash, because of the extensive attacks on his work and style by AWN Pugin, and because his family retained his archives, making them inaccessible to scholars for a long time.

Burton’s projects in London included Hyde Park – including the Gate or Screen at Hyde Park Corner and Wellington Arch – Green Park, Saint James’s Park, and Regent’s Park, the enclosure of the forecourt of Buckingham Palace, the Clubhouse of the Athenaeum Club, Carlton House Terrace, and houses at Kew Gardens. Outside London, he planned and designed the seaside resort towns of St Leonards-on-Sea and Fleetwood, and the spa town of Tunbridge Wells.

Burton was a leading member of Georgian and Regency society in London, and a close friend of Princess Victoria, the future Queen Victoria, the Duchess of Kent, the Duke of Devonshire, Sir John Soane John Nash. 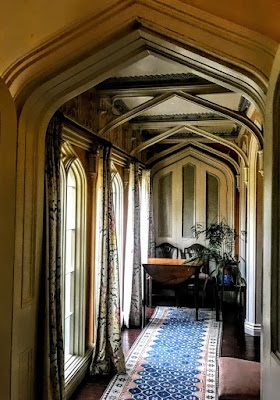 Martinstown House is a cross between a luxury hotel and a private home (Photograph: Patrick Comerford, 2019)

Today, Martinstown is known as a wedding venue with excellent food and a feeling of luxury and elegance. It is a cross between a luxury hotel and a private home, where Edward and Roisin Booth are hands-on owners and engaging hosts. The house also offers dinner parties, lunches, guest accommodation and cooking classes and is a venue for corporate and family gatherings.

Inside, each room has been designed individually to ensure it is unique and dramatic in style and finish.

The Morning Room is decorated with antiques and rare prints of Rome, and is a comfortable, quiet space, with a log fire. The Drawing Room, with double-height ceilings, large sofas, a piano and an open fire, is used for larger parties. The Dining Room is an intimate venue for meals, with a long antique mahogany dining table, sideboards and silver candelabra.

Martinstown House also has a fully working farmyard, and the farm has cattle, sheep, several horses and two rescue donkeys, and the entire estate is a bird sanctuary, with a variety of bird life. 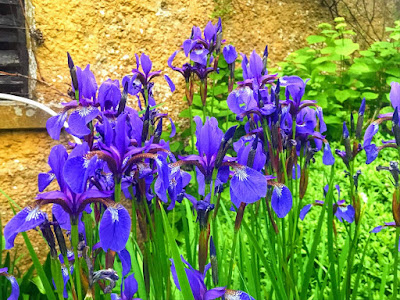 The gardens at Martinstown House were filled with flowers at the weekend (Photograph: Patrick Comerford, 2019)

A notorious resident of Martinstown House in the 1950s and 1960s was Otto Skorzeny (1908-1975), a leading Nazi and the SS commander who captured Mussolini while he was being held by the allies in a hilltop fortress in Italy.

Skorzeny was born in Vienna and joined the Austrian Nazi party in the early 1930s. At the outbreak of World War II, he was involved in fighting on the Eastern Front, taking part in the German invasions of Yugoslavia and the Soviet Union. By April 1943, he had become the head of German special forces, in charge of a unit of elite SS commandos.

Fritz von der Schulenburg, the grandfather of the Dublin-based journalist Kim Bielenberg, was captured and tortured by Skorzeny after a plot to kill Hitler.

He was tried for war crimes in 1947 but was acquitted. But Skorzeny remained unapologetic about his Nazi activities and showed no remorse for his war-time activities.

He was a pioneer of what is now known as special operations warfare and in the early 1950s, he was an adviser to the Egyptian dictator Gamal Abdel Nasser, training his army in guerrilla tactics. He later moved to Madrid, where he ran an import-export business, believed by many to be a front for shuttling escaped Nazi war criminals to Argentina. For many years, Skorzeny lived in Argentina where he was Eva Peron’s bodyguard.

Skorzeny first travelled to Ireland from Madrid in June 1957. At a gala reception by politicians and celebrities Portmarnock Country Club hotel, he was feted by Dublin’s social glitterati, including an up-and-coming young Charles Haughey.

Following this warm welcome, Skorzeny bought Martinstown House and the 160-acre farm at the Curragh in 1959, in the hope of becoming a permanent resident in Ireland. He was allowed temporary visas to stay in Ireland with the proviso that he would not travel to Britain.

The latest volume of Documents on Irish Foreign Policy 1957-1961 includes a note from Conor Cruise O’Brien, then a senior official in the Department of External Affairs, in June 1957 referring to a visa application: ‘Skorzeny, who is now stateless, resides in Spain. He is on the UK Home Office blacklist as an undesirable character. I think this means no more than that he made their faces red in the matter of Mussolini. We are not aware of any specific war crimes charges against him.’

Skorzeny applied for permission to become a permanent resident in Ireland. At the end of 1959 another official, Timothy Horan, reported allegations in the French press that Skorzeny was using his residence in Spain to engage shipping arms to Arab countries. 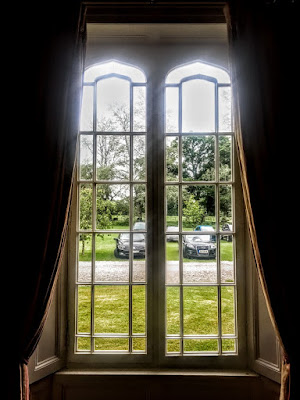 Each room in Martinstown House has been designed individually (Photograph: Patrick Comerford, 2019)

For a few years, Skorzeny lived a peaceful life at Martinstown House as a gentleman farmer. He stood 6 ft 4 in tall, weighed 250 lb, and was known as ‘Scarface’ because of a long, distinctive scar on his left cheek.

But Irish politicians became increasingly concerned that he was engaged in ‘anti-Semitic activities’ in Ireland. Dr Noel Browne raised concerns in the Dail about Skorzeny’s anti-Semitic and neo-Nazi activities.

Newspaper reports in the early 1960s alleged Skorzeny had opened up an escape route for Nazis in Spain and his farm in Kildare was a refuge for fascists on the run.

In the end, he was unable to obtain a permanent Irish visa and in 1962 he moved back to Spain, still ruled by Franco’s fascist regime. He rarely visited Ireland after 1963 and sold Martinstown House in 1971. He died of cancer in Madrid in 1975, aged 67. Skorzeny never denounced Nazism and was buried by his former comrades who gave Nazi salutes and draped his coffin in Nazi flags and colours. 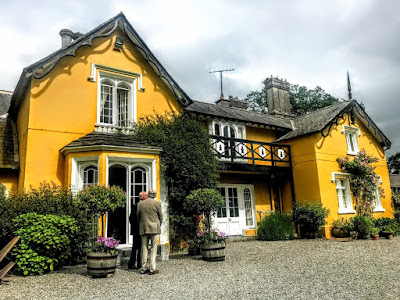