When Córdoba became
a city of philosophers,
poets and theologians 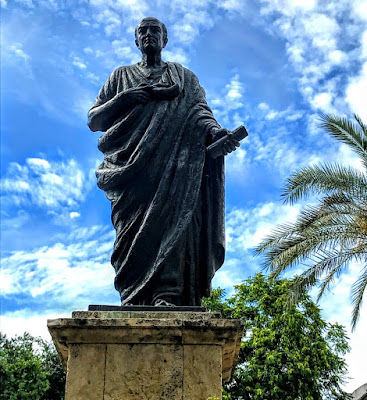 A modern statue of Seneca in Córdoba (Photograph: Patrick Comerford, 2019)

Twice during walking tours of Córboda last week, I was part of groups that met at the statue of the Stoic philosopher Seneca, by the Puerta de Almodóvar, one of the main city gates.

Seneca, or Seneca the Younger (ca 4 BC to AD 65), was born in Córdoba and became a leading Roman Stoic philosopher, statesman and dramatist. His full name was Lucius Annaeus Seneca.

Seneca was was brought as a child to Rome, where he was trained in rhetoric and philosophy. His father was Seneca the Elder, his elder brother was Lucius Junius Gallio Annaeanus, and his nephew was the poet Lucan. Seneca was exiled to Corsica by the Emperor Claudius in the year AD 41, but was allowed to return in 49 as a tutor to Nero.

When Nero became emperor in 54, Seneca became his advisor and with Sextus Afranius Burrus he provided competent government for the first five years of Nero’s reign. But, over time, Seneca’s influence with Nero declined, and in 64 Seneca was forced to end his own life for his alleged role in a plot to assassinate Nero, although it is likely he was innocent.

Seneca is known for his philosophical works and for his plays, which are tragedies. His prose works include a dozen essays and 124 letters dealing with moral issues. These writings constitute one of the most important bodies of primary material for ancient Stoicism.

The early Church was favourably disposed towards Seneca and his writings. Tertullian refers to him as ‘our Seneca,’ Jerome includes him in a list of Christian writers, and he is also mentioned by Augustine.

Dante places Seneca and Cicero among the ‘great spirits’ in the First Circle of Hell, or Limbo. Boccaccio wrote an account of Seneca’s suicide, hinting that it was a kind of disguised baptism or a baptism in spirit. Other writers, such as Albertino Mussato and Giovanni Colonna argued that Seneca has been a Christian convert. He appears also in the writings of Chaucer, Petrarch, Erasmus and Calvin.

As a writer of tragic plays, he is best known for his versions of Medea, Thyestes, and Phaedra. Thyestes is considered Seneca’s masterpiece and has been described as one of the most influential plays ever written. His Medea is also highly regarded, and was praised along with Phaedra by TS Eliot. 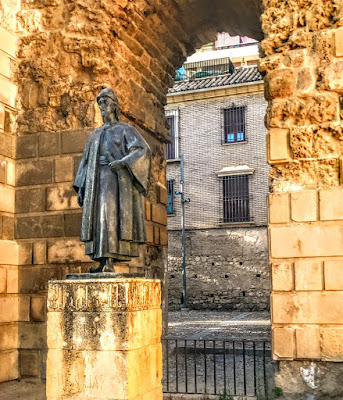 Aben Hazam (994-1063), whose full name was Abū Muḥammad ʿAlī ibn Aḥmad ibn Saʿīd ibn Ḥazm, was a poet, polymath, historian, jurist, philosopher, and theologian. He was born in Córdoba, and became a leading proponent and codifier of the Zahiri school of Islamic thought. In all, he produced 400 works, although only 40 survive.

He is seen as one of the leading thinkers of the Muslim world, and has been called the father of comparative religious studies.

Aben Hazam’s grandfather Sa’id and his father Ahmad both held senior positions in the court of the Umayyad Caliph Hisham II. They probably were Christians who had converted to Islam, and they became a politically and economically important family.

As a philosopher and theologian, Aben Hazam was known for his cynicism regarding humanity and his strong respect for the principles of language and sincerity in communication.

After the collapse of the Umayyad Caliphate, Aben Hazam was frequently jailed as a suspected supporter of the Umayyads. He found asylum on the island of Majorca in the 1040s, but later returned to Andalusia.

Initially, he was a follower of the Maliki school of law in Sunni Islam, but switched to the Shafi'i school later and, around the age of 30, finally settled with the Zahiri school.

Many of his works were was burned publicly in Seville by his opponents, but about 40 of his books have survived.

In addition to works on law and theology, Aben Hazm also wrote more than 10 books on medicine, and discussed integrating the sciences into a standard curriculum for education. His wrote about the links between science and theology, jurisprudence, logic, ethics, language, philosophy. He also wrote poetry, but only a fragment of one of his poems survives.

Averroes or Ibn Rushd (1126-1198) is known for his commentaries on Aristotle (Photograph: Patrick Comerford, 2019)

His philosophical works include numerous commentaries on Aristotle, for which he was known in the west as the ‘Commentator.’ He was also a judge and a court physician for the Almohad caliphate.

Averroes was born in Córdoba into a family of prominent judges. His grandfather, Abu al-Walid Muhammad, was the chief judge of Córdoba and the imam of the Great Mosque of Córdoba.

The Caliph Abu Yaqub Yusuf was so impressed with his knowledge that he became the patron of Averroes and commissioned many of his commentaries. Averroes later became a judge in both Seville and Córdoba, and in 1182, he was appointed court physician and the chief judge of Córdoba.

He fell into disgrace in 1195, was charged with political offences, and was exiled to nearby Lucena. He had returned to royal favour shortly before he died in Marrakesh in 1198. At first, he was buried in Morocco, but his body was later moved to Córdoba for another funeral, attended by the Sufi mystic and philosopher Ibn Arabi (1165-1240).

Averroes sought to restore what he considered the original teachings of Aristotle and opposed the Neoplatonist tendencies of earlier Muslim thinkers. He argued that philosophy was permissible in Islam and even compulsory among certain elites. He also argued that Quranic texts should be interpreted allegorically if the appeared to contradict conclusions reached by reason and philosophy.

Maimonides was one of the early Jewish scholars who received the works of Averroes enthusiastically, saying he ‘received lately everything Averroes had written on the works of Aristotle’ and that Averroes ‘was extremely right.’

In the West, Averroes was known for his extensive commentaries on Aristotle, many of which were translated into Latin and Hebrew. The translations of his work reawakened Western European interest in Aristotle and Greek philosophers, an area that had been widely abandoned after the fall of the Roman Empire.

He controversially proposed that all humans share the same intellect. His works were condemned by the Church in 1270 and 1277. Thomas Aquinas relied extensively on Averroes’ interpretation of Aristotle, but disagreed with him on many points. Averroes continued to attract followers up to the 16th century, when European thought began to diverge from Aristotelianism.

Averroes wrote at least 67 original works, including 28 works on philosophy, 20 on medicine, eight on law, five on theology, and four on grammar, in addition to his commentaries on most of Aristotle’s works and his commentary on Plato’s Republic. Many of his works in Arabic did not survive, but their translations into Hebrew or Latin did. 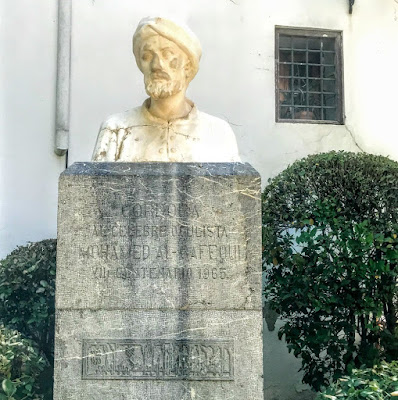 Other great scholars from Córdoba during this period include Muhammad ibn Aslam Al-Ghafiqi or Mohamed al-Gafequi, who was born in Córdoba and died in 1165. He was a 12th century oculist and author of The Right Guide to Ophthalmology. This book shows that physicians in Córdoba at that time had a complex understanding of the conditions of the eye and eyelids, which they treated with many different surgical procedures, ointments and chemical medicine.

He was a highly experienced eye-specialist and connoisseur of Arabic literature who had his practice in Cordoba. He studied and treated diseases of the pupil and the iris, and he discovered that cataracts were caused by the segregation of a liquid that produces cloudiness, like water falling in front of the eye.

The inscription on his monument reads, ‘Cordoba honours the famous eye specialist, Mohamed al-Gafequi, on his eighth centenary – 1965.’

Although the poet, philosopher, mystic and Sufi saint Ibn ʿArabi (1165-1240) was born in Murcia and died in Damascus, he too spent some years in Córdoba. His full name was Abū ʿAbd Allāh Muḥammad ibn ʿAlī ibn Muḥammad ibnʿArabī al-Ḥātimī aṭ-Ṭāʾī and his works have been beyond the Muslim world. Over 800 works are attributed to him, and 100 survive in the original manuscript.

One of his poems is ‘My religion is love’:

A pasture for gazelles, a convent for Christians.
A temple for idols, a Kaba for the pilgrim.
A table for the Torah, a book of the Koran.
Whichever the route love’s caravan shall take,
that path shall be the path of my faith.

The Roman Bridge and Tower in Córdoba (Photograph: Patrick Comerford, 2019)