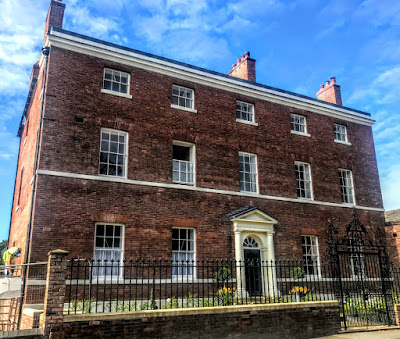 During my return visit to Lichfield last week, as I walked many times between the Hedgehog on Stafford Road and Lichfield Cathedral, I was pleased to see that the former Angel Croft Hotel, Westgate House and Westgate Cottage on Beacon Street are being saved for future generations.

The Angel Croft once epitomised elegant hotel accommodation in Lichfield. But in recent years the building had fallen into such a sad state of disrepair and neglect that I had wondered on many occasions (2011, 2013, 2013) whether it was beyond saving and restoring.

However, Friel Construction, based in Great Wyrley, recently acquired the former Angel Croft Hotel, Westgate House and Westgate Cottage, along with the surrounding land on Beacon Street, including the hotel car park.

The Angel Croft came with planning permission to convert both the hotel and its outbuildings into nine apartments. Friel Construction are developing the three-acre site into what is described as ‘luxury city centre living while harmonising with the Georgian architecture of the surrounding area.’

The Angel Croft is a Grade 2* listed building, and Westgate House and Westgate Cottage are Grade 2 listed buildings. This means these buildings must be restored with care and attention. The surrounding land is also of historic interest, and an archaeologist was involved in the project from an early stage.

Although both the Angel Croft Hotel and Westgate House date from ca 1750, their stories date back to the mid-12th century and the prebendal lands that provided stipends or incomes for the prebendaries or canons of Lichfield Cathedral.

Land in the Gaia Lane area was included in the endowment of the Prebend of Gaia in Lichfield Cathedral and was in existence probably by the mid-12th century. The prebend was divided into two prebends, Gaia Major and Gaia Minor, before 1279.

In 1498, the Prebend of Freeford’s property in Lichfield included the Angel in Beacon Street on the south side of the later Angel Croft hotel. It was rebuilt in the early 16th century, but was destroyed in the Civil War.

A rental from this time (1497-1498) also shows that the property of the Vicars Choral included two inns in Beacon Street: the Talbot on the site of the later Angel Croft hotel and the Cock.

A house was built on the site of the Talbot ca 1790 for George Addams, a wine merchant.

It became the Angel Croft hotel around 1930. However, by the 1980s its reputation was slipping, and one reviewer described it as Lichfield’s ‘very own Fawlty Towers.’ Yet it was still being advertised as recently as 2008, although by then its AA rating had slipped to one star.

New owners began refurbishing the hotel around 2008, but the property was broken into soon after, the pipes were stolen and the building was flooded.

The Angel Croft Hotel closed in recent years. Some reports said it was bought by the Best Western chain, which also owns the George Hotel on Bird Street, where the playwright George Farquhar was supposed to have stayed.

Renovation work resumed a few years ago, but for many years it seemed nothing was being done to repair the building, and while there was no sign outside to say the hotel was closed, it lay empty for years. again.

Some window panes – over the main front door and at the rear – were broken, the rear gate was open, and the Angel Croft Hotel became a sad sight. Although a conservation team from Lichfield District Council was said to be monitoring the situation and in regular contact with the owners, no work has been carried out for some years, and English Heritage regarded the building as ‘at risk.’ 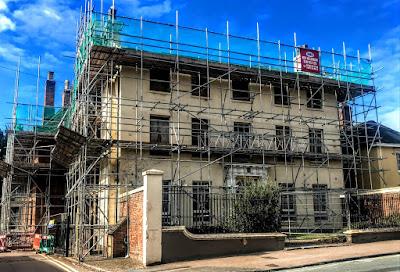 As for Westgate House, a house outside the Close was annexed to the Prebend of Wolvey in the later 1270s. This house, known as Pool Hall by 1438, stood on Beacon Street on the site of the present Westgate House.

It seems to have been destroyed during the Civil War in the mod-17th century, but was rebuilt by 1670. The present Westgate House and its front wall and railings date from ca 1750, when it was rebuilt once again, possibly by Peter Garrick, a brother of the actor David Garrick, who had leased the property.

The Friary School opened a boarding house for about 30 girls in Westgate House in 1953.

The school became a mixed comprehensive in 1971, and a new large school was built on Eastern Avenue and opened in 1973. Westgate House was closed in 1981, and the school stopped taking boarders.

The vicars choral also received grants of houses, land, and rent charges from the early 13th century and became the largest clerical landowners in Lichfield. A rental of 1497-1498 shows the extent of their property. Apart from the Talbot on Beacon Street, later the site of the Angel Croft, their property included the Swan in Bird Street, acquired in 1362, the Talbot and a second inn on Beacon Street known as the Cock, and a house called White Hall in Beacon Street on the north side of Dr Milley’s Hospital.

By 1592, the vicars also had an inn in Beacon Street known as the Lamb, on the site of Westgate Cottage and opposite the entrance to the Cathedral Close.

Westgate Cottage dates from the 18th century, with early 19th century alterations. It is a two-storey, Tudor style house built in painted brick with a stucco façade. A return has a short wing connecting Westgate Cottage with Westgate House. 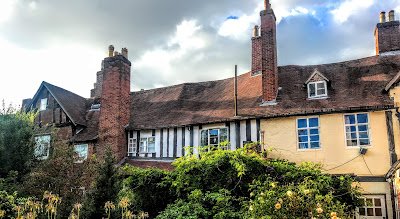 Vicars’ Close in Lichfield … by 1592, the vicars had an inn in Beacon Street known as the Lamb, on the site of Westgate Cottage (Photograph: Patrick Comerford, 2019)