‘Send not to know
for whom the bell tolls,
it tolls for thee’ 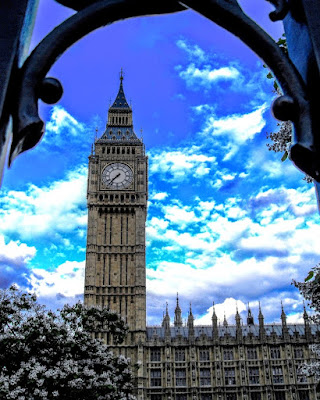 Big Ben … prominent Brexiteers want to spend £500,000 on taking off its wraps and chiming it on 31 January (Photograph: Patrick Comerford)

Nigel Farage, who has been the leader of UKIP too many times to count, and leader of the Brexit party that crashed into oblivion at last month’s general election, has linked arms with the Conservative MP Mark Francois are both are calling for the wraps to be taken off Big Ben so it can chime for an hour at 11 p.m. on Friday 31 January to mark Britain’s formal departure from the European Union.

To interrupt the restorations works on Big Ben would be an extravagant indulgence: estimates say it would cost at least £500,000 – and that sort of money does not fall off the side of a big red bus too easily.

The Revd John James of Watchfield, Somerset, in a letter in the Guardian today [16 January 2020], says ‘it would be a slap in the ear for the 63% of the electorate who either voted to remain or did not vote.’

It is interesting to some, no doubt, that both men have surnames that indicate deep ancestral roots in France. Nigel Farage has a very Gallic-sounding surname; we have known for years about his mixed Huguenot and German ancestry, and that his first wife, Gráinne Hayes is Irish, and his second wife Kirsten Mehr is German. As for Mark Gino Francois, his father is of French descent and his mother, Anna Carloni, is Italian by birth.

In addition, these two politicians, with an appalling record of xenophobic vitriol, have the gall to tell to suggest that church bells should ring out across the United Kingdom on the morning of Saturday 1 February, as on VE Day.

Nigel Gann from Lichfield, in another letter in the Guardian today, writes: ‘We should support suggestions that all churches throughout the four nations should mark the last hours of 31 January by ringing their bells. A single funeral tolling bell between 10 pm and midnight would set the right tone.’

The Revd Giles Fraser is a former Guardian columnist who has described himself as a ‘lefty Brexiter.’ But even he admitted to the Guardian today that this proposal could worsen divisions in Britain: ‘This is hardly the way to bring the country back together after three and a half years of division.’

John James concludes his letter by paraphrasing John Donne, ‘Send not to ask for whom the bells toll …’ 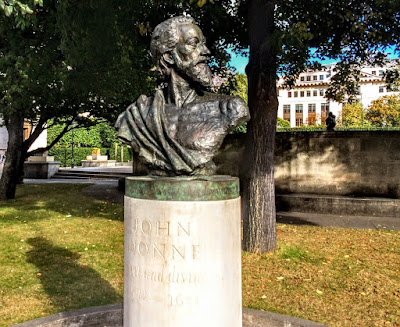 These letters in the Guardian are reminders that John Donne’s best-remembered lines are worth re-reading in the light of the current ‘Brexit’ crisis: 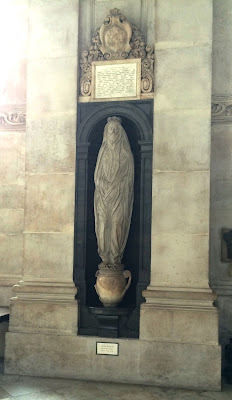 John Donne’s monument in Saint Paul’s Cathedral, London ... ‘If a clod be washed away by the sea, / Europe is the less’ (Photograph: Patrick Comerford)