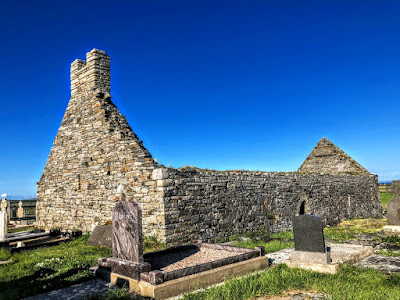 The mediaeval Church of Saint John the Baptist at Killballyowen outside Cross, Co Clare … surrounded by a graveyard and probably a mediaeval monastic site (Photograph: Patrick Comerford, 2020)

On the way back to Kilrush from the tip of Loop Head on Sunday afternoon (19 July 2020), two of us stopped briefly in the Co Clare village of Cross to see the church ruins at Kilballyowen and the surrounding graveyard on the west side of village.

The village of Cross is in the middle of the Loop Head Peninsula, west of Carrigaholt and on the road to Kilbaha, and it is in the civil parish of Kilbpllyowen.

Kilballyowen is about 20 km west of Kilrush, in the extreme south-west of the Barony of Moyarta in Co Clare.

The name of Cross could be derived from a cross related to the old ruined church in Killballyowen. But it is more likely that the village takes its name from a once-important road crossing as Cross is in the centre of the Loop Head peninsula.

The name Kilballyowen comes from the Irish Cill Bhaile Eoghain, meaning the church of the town or townland of Saint John the Baptist. 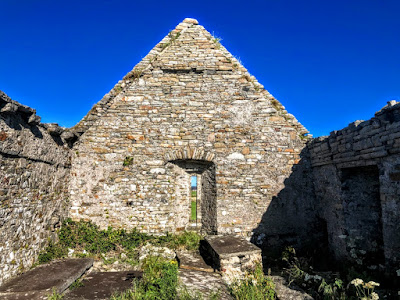 The ruins of the mediaeval Church of Saint John the Baptist are surround by the graveyard.

The churchyard is notable for its many impressive family vaults and mausoleums and the former church is filled with graves too, raising its former floor level.

This is so noticeable, that the piscina at the east end of the north wall is now almost at ground level. 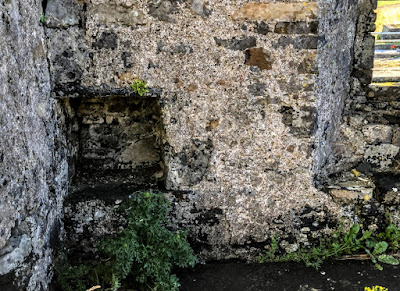 The piscina inside the church is now almost at ground level (Photograph: Patrick Comerford, 2020)

Reports dating from the 19th century show the church ruins may be the ruins of a friary, but there are no public signs that hint at its history.

Before the disestablishment of the Church of Ireland, the parish was already incorporated into Kilrish parish, and the rectorial tithes were divided between the Prebendary of Tomgrany and the Prebendary of Inniscattery in the chapter of Killaloe Cathedral, and Lord Castlecoote. 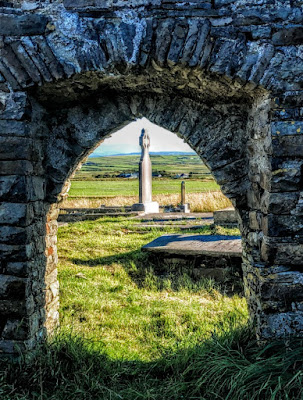 Looking out of the church ruins through a door opening in the south wall (Photograph: Patrick Comerford, 2020)

Unable to find out anything more about this church ruin or about the former priory, I went to look at the Roman Catholic Parish Church in the heart of the village. I thought how coincidental it would be if the Church in Cross were called the Church of the Holy Cross. Instead it is called Our Lady of Lourdes.

The church was built in 1959, and it seems to have some interesting stained glass. But the church was closed, and I was unable to learn anything more about it. 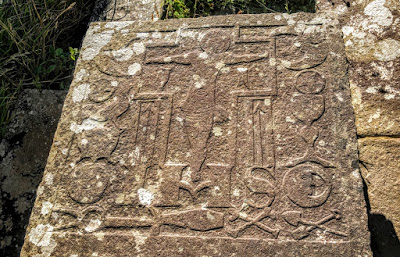 A grave slab with the Crucifixion and symbols of the Passion (Photograph: Patrick Comerford, 2020)

However – given I ought to have been at USPG’s annual conference in Swanwick this week (20 to 22 July 2020) – I was interested to learn of one distant connection between that Coote family and USPG.

The Right Revd Roderic Norman Coote (1915-2000) was a former curate of Saint Bartholomew’s Church, Ballsbridge (1938-1941) and a former minor canon (clerical vicar) of Christ Church Cathedral, Dublin (1940-1941). He left Ireland in the middle of World War II to become a missionary in Gambia with the Anglican mission agency SPG, now USPG (United Society Partners in the Gospel). 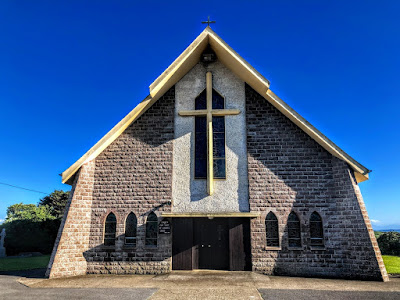