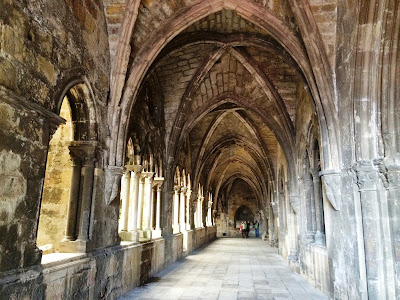 In the cloisters of the Sé Catedral in Lisbon … Isaac de Castro was burned to death by the Inquisition in Lisbon on 15 December 1647 (Photograph: Patrick Comerford, 2014)

The de Castro surname is found among Sephardic families of Portuguese, Spanish and Italian descent. Soon after the establishment of the Portuguese Inquisition, members of the family emigrated to Bordeaux, Bayonne, Hamburg, and various cities in the Netherlands.

Although the name does not indicate Jewish origins, it was adopted by some Portuguese and Spanish Jewish families after the forced conversions introduced by the Inquisition in the late 15th and early 16th centuries.

Abraham de Castro was master of the mint and farmer of the coinage for Sultan Sulaiman, in Cairo in the 16th century. He secured a firman guaranteeing the liberties of the Jews in Ottoman-ruled Egypt, and is credited with saving them from oppression.

Balthazar (Isaac) Orobio de Castro, a philosopher, physician and apologist, was born in Braganza ca 1620, but was jailed and tortured by the Inquisition in Portugal when he was exposed as a secret Jew. He fled to Amsterdam and died there in 1687.

Earlier, in 1647, the Portuguese Inquisition in Brazil compelled Isaac de Castro to choose between his Judaism and being burned alive. Isaac, who had moved from Amsterdam to Recife at the age of 16 in 1641. He was sent to Lisbon, and at a second trial there he chose his faith and martyrdom on 15 December 1647.

So, I was interested to find a Sephardic de Castro family who had strong business and cultural connections with Ireland over three generations in the 18th century.

In 1710, Salomon or Solomon de Castro married Rachel Bravo, daughter of the poet Abraham Bravo of Bayonne, France, who was also from a Spanish or Portuguese family. The marriage is registered in the Bevis Marks Synagogue, and he settled the sum of £20,000 on his wife when they married.

Although Solomon de Castro had moved to London by 1732, his wife may have waited in Dublin to follow him until their youngest son Daniel was born in in 1733 in Dublin.

Solomon de Castro was the secretary of the Portuguese and Spanish or Sephardic Community in London from 1732 until he died in 1740. He was buried in the Jewish Cemetery at Mile End in Stepney.

In his will, written in Portuguese, he asked to be buried near his wife. He left to his son David his Sefer Torah in the Synagogue to his son David, and he appointed this son David and Benjamin Mendes da Costa as guardians of his son youngest living Daniel. 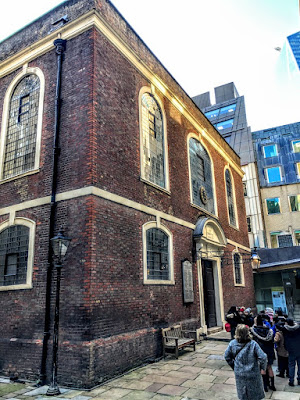 Bevis Marks Synagogue, London … Solomon de Castro and his son Abraham de Castro were secretaries of the Spanish and Portuguese Jewish community for almost half a century, from 1732 to 1779 (Photograph: Patrick Comerford, 2020)

These seven surviving de Castro brothers worked closely together in business across the world.

The eldest son, David de Castro, worked from Bury Street in Saint Mary Axe parish, London, shipped coral to his brother Samuel in India. He married his cousin Judith, daughter of David Bravo, and died in London, and their only daughter, Sarah Judith (1752-1824), an artist, married her uncle Daniel de Castro.

The second son Jacob de Castro, lived in Amsterdam, where he was involved in cutting, polishing and selling diamonds imported from India.

The fourth son, Samuel de Castro, was a merchant based in Fort St George in Madras (now Chennai), India, sending uncut diamonds to his brother Jacob in Amsterdam. He was also involved with the East India Company. He died in Islington High Street in 1779. He was the father of two sons, Samuel de Castro (1763-1822) and Daniel de Castro (1775-1840). The younger son, Daniel, married his first cousin, Rebecca Lara Lopez, daughter of Joshua Lara Lopez and Sarah Ximenes. They have descendants in England and New Zealand.

The fifth son, Isaac, moved in 1744 to Livorno (Leghorn) in Italy, a centre of the coral trade, to buy coral and send it to his brother David in London. He was the father of two sons, Solomon and Abraham, and two daughters.

The sixth son, Moses de Castro, worked first in Curacao in the Dutch West Indies, then moved to India, to take over from his brother Daniel. He built a new house for the firm of Daniel and Moses de Castro in Fort St George in 1768.

The seventh and youngest son, Daniel de Castro, moved in 1757 to Fort St George, to learn the family business from his brother Samuel. Daniel returned to London and in 1766 married Sarah Judith de Castro, the 14-year-old daughter of his late brother David.

Samuel returned to London in 1769, and in 1771 he married Sara Lara, whose sister-in-law was an aunt of the future Prime Minister, Benjamin Disraeli.

These Castro brothers were first cousins of Jacob de Castro (1758-1824), whose father was the headmaster of the Spanish and Portuguese Jews’ School in London. Jacob was supposed to join his cousin Moses de Castro at Fort St George, but instead decided to go on the stage in London, and became a comedian and an opera singer who also appeared on the stage in Dublin in various roles between 1793 and 1804.

Another Castro family living in Dublin in the early 19th century may have been of ‘Marrano’ or converso descent. Francis Castro was a grocer in Saint Andrew Street, and Henry Castro was a shoemaker in Aungier Street in 1804. Francis Castro’s daughter married Redmond Harte of Thomastown, Co Kilkenny, that year. 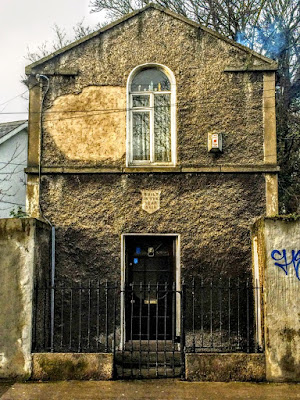 Hi Patrick, I am extremely interested in this post because I have been researching my family history and got back to Peter Castro, who was born in Dublin in the 1770s. Peter Castro is my direct ancestor. I have discovered a few other Castros living in Dublin in the late 1700s, some of whom you mention in this post (Francis and Henry Castro, who were brothers). I haven't found any direct links between them and Peter Castro, but given the names Peter chose for his sons, I imagine they are closely related. I'd be really interested to know about your connection with the Castros, and why you think the Castros might have been of crypto-Jewish or Marrano descent. Also, I wonder if you could give me any pointers to help me get a bit further. Many thanks and best regards, Andy

I'm also very pleased to find your post as I'm trying to fill in my family history.

As I understand one of my direct ancestors is Samuel de Castro (b. 17 June 1725 in Dublin). The line then follows through Daniel de Castro (b. 21 April 1775 in London), Daniel Joshua de Castro (b. 13 May 1806 in Berkshire), Percival de Castro (b. 4 October 1839 in London), Bernard Pierre Ximenes Lopes de Castro (my late grandfather, b. 19 February 1896 in Thanet), George Richard de Castro (my late father, b. 10 October 1931 in Newbury) and finally me - Robert Richard Stephen de Castro (b. 3 September 1968 in Bromley). My great uncle, Herman de Castro, was a keen genealogist and many of the details in your article seem to tie up with his notes. I'm trying to substantiate what he indicated on the family tree with actual birth, date and marriage records but this is proving challenging going back beyond Daniel Joshua de Castro.

If you are able to share any additional details or pointers that you have uncovered that would assist me in this task I would very much appreciate your help. In any case, thank you very much for writing such an informative article.

Hello Patrick, Andy and Robert, I too have been researching the Castros. I have always been intrigued by the name Castro - indeed growing up my grandfather led me to believe that Fidel Castro was my uncle! My grandfather, Sidney Castro born in 1897 seems to be a descendant of Peter Castro (1750-1793) of Dublin. His wife seems to be Margaret Mary Grely. I haven't been able to go further back than this and would love to find out more. Like you have discovered, Andy, the names Peter, Henry and Francis crop up regularly. Any other information you have would be extremely appreciated.
Kind regards,
Sue Crofton
sue.barnhill@gmail.com

Hi Patrick and other commenters. I am a descendant of Charles Daniel de Castro who emigrated to New Zealand around 1850 (and did quite well for himself here). I am interested in the info you have on the original Irish members David R Namias and his grandson David.
I have never seen information on them before - where did you source this?
Any idea of who is the missing link?

Very happy to provide info on the New Zealand branch of the family if it is of any interest.
Lesley Clouston
lesleyclouston@xtra.co.nz

Hello , I have just come across this posting with interest ! My name is Judith Rodrigues and I am researching my ggrandfather Abraham Rodrigues, Sephardic Jewish ancestry - I am trying to find out more about why my 4xggrandfather David's brother was called or nick named Abraham [the Magnate] Rodrigues as I can find absolutely no record of anything indicating what he was supposed to be a magnate of ,so its a bit of a mystery.
David Rodrigues [my 4xgrandfather] was born in 1771 and his brother Abraham [The Magnate] was born in 1772 - but I have just discovered that his Godfather [at his circumcision, Bevis Marks records ] was 'Daniel de Castro' - and so I am wondering if the addition to his name of 'The magnate'in the family tree ! could be in relation to [or a nick name] because of his Godfather being 'Daniel de Castro' who it would seem was a magnate ?
Abraham married Leah Nunes Martines , that is all I know really about him -- but reading this posting has made me think that this might be the reason he was called Abraham [the magnate] Rodrigues !?

Many thanks for this interesting post. I am currently doing a little research about Jacob de Castro, who had a daughter called Rachel de Castro who was born in 1742 or 1743 in London but who, at least in 1762, lived in Amsterdam. Because the Jacob ben Salomon de Castro you are describing and the Jacob de Castro I am looking for have the same name, lived during the same time in Amsterdam and have a connection to London, I was wondering how you found out about the Amsterdam-connection of Jacob de Castro.