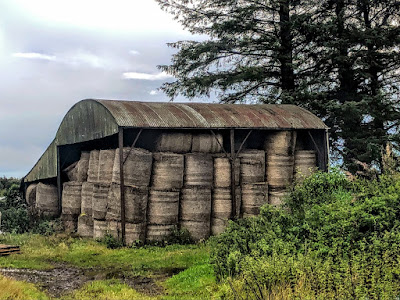 ‘The Festival of Sukkot teaches us to give thanks to God for the harvest of fruit and grain and to share these and all nature’s blessings with our fellow men’ (Rabbi Sidney Brichto) … a full barn on my grandmother’s former farm near Cappoquin, Co Waterford (Photograph: Patrick Comerford, 2020)

The Harvest is in in most parts of rural Ireland. But in the Rathkeale Group of Parishes, we decided last week to cancel the planned Harvest Thanksgiving Service this evening (2 October 2020) in Holy Trinity Church, Rathkeale, Co Limerick.

Instead, the Harvest theme is being taken up in our services next Sunday morning (4 October 2020), with Harvest readings, hymns and intercessions at the Parish Eucharist in Saint Mary’s Church, Askeaton (9.30 a.m.) and Morning Prayer in Saint Brendan’s Church, Tarbert (11.30 a.m.).

The Festival of Sukkot this year begins at sundown this evening [Friday 2 October 2020] and continues until sundown next Friday [9 October]. The conclusion of Sukkot marks the beginning of the separate holidays of Shemini Atzeret and Simchat Torah.

This Festival is mentioned in Exodus as agricultural in nature – ‘Festival of Ingathering at the year’s end’ (see Exodus 34: 22) – and it marks the end of the harvest time and of the agricultural year in the Land of Israel. A more elaborate religious significance in Leviticus describes the Exodus and the dependence of the People on the will of God (see Leviticus 23: 42-43).

A meditation on Sukkot in Service of the Heart, a prayer book I use regularly in my daily prayers and meditations, offers this Kiddush for welcoming Sukkot, composed by Rabbi Sidney Brichto (1936-2009), a Jewish authority on both the Old Testament and New Testament and translator of the People’s Bible:

‘Let us praise God with this symbol of joy and thank him for his providence which has upheld us in our wanderings and sustained us with nature’s bounty from year to year. May our worship lead us to live this day and all days in the spirit of this Festival of Sukkot with trust in God’s care, with thanksgiving for his goodness, and with determination that all men shall enjoy the blessings of the earth.’

This Biblical holiday is celebrated on the 15th day of the month of Tishrei, usually between late September and late October. It is one of the three biblically mandated festivals when Jews were expected to undertake a pilgrimage to the Temple in Jerusalem, along with Passover and Shavuot (see John 7: 2-14).

In the times of the Temple in Jerusalem, Sukkot was also the time of a water-drawing ceremony (see John 7: 37-38).

Sukkot is a joyous and upbeat celebration, and is celebrated today with its own customs and practices.

It is traditional in Jewish families and homes to mark this festival by building a sukkah or a temporary hut to dwell in during the holiday. The customs include buying a lulav and etrog and shaking them daily throughout the festival.

Throughout the holiday, meals are eaten inside the sukkah and some people even sleep there as well.

On each day of the holiday it is mandatory to perform a waving ceremony with the Four Species or specified plants: citrus trees, palm trees, thick or leafy trees and willows.

Prayers during Sukkot include reading the Torah every day, the Mussaf or additional service after morning prayers, reciting Hallel, and adding special additions to the Amidah and Grace after Meals. There are traditional readings from the Book of Ecclesiastes.

On each day of Sukkot, worshippers walk around the synagogue carrying the Four Species while saying special prayers known as Hoshanot. This ceremony commemorates the willow ceremony at the Temple in Jerusalem, in which willow branches were piled beside the altar with worshippers parading around the altar reciting prayers.

Another custom is to recite the ushpizin prayer to invite one of seven ‘exalted guests’ into the sukkah. These ushpizin or guests represent the seven shepherds of Israel: Abraham, Isaac, Jacob, Joseph, Moses, Aaron and David. According to tradition, each night a different guest enters the sukkah followed by the other six. Each of the ushpizin has a unique lesson that teaches the parallels of the spiritual focus of the day on which they visit.

Brant Rosen is an American rabbi and blogger, who is known for his activism and outspokenness on behalf of the Palestinian people, and who writes poems major festivals in the Jewish calendar, such as sukkot.

Brant Rosen is the full-time rabbi of Tzedek Chicago, a ‘non-Zionist’ synagogue he founded in 2015. He has also worked for the Quaker-led social justice programme, American Friends Service Committee, co-chairs the Jewish Voice for Peace Rabbinical Council, and co-founded the Jewish Fast for Gaza (Ta’anit Tzedek).

He has been named one of the ‘Top 25 Pulpit Rabbis in America’ by Newsweek magazine.

Brant Rosen’s blog Shalom Rav explores ‘the intersection between Judaism and social justice, with a particular emphasis on Israel/Palestine.’ He is also the author of the blog Yedid Nefesh, where he posts his poetry and thoughts on Judaism and spirituality.

On Sukkot Eve 2012, he posted his own selections from Ecclesiastes to help celebrate this time of rejoicing:

To mark the festival of Sukkot in 2011, Brant Rosen published a new version of the best-known part of the Book of Ecclesiastes (3: 1-8):