Town planning, bridges
and pretty cottages on
the streets of Kenmare 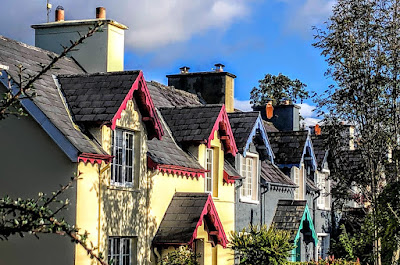 My recent summer ‘Road Trip’ began in Kenmare in south Co Kerry, at the beginning of the Ring of Kerry, and it seemed inevitable that I would return to Kenmare, with a visit earlier this week to see some of the buildings I had missed at the end of summer.

Kenmare’s name in Irish, An Neidín, means ‘the little nest.’ But the town only developed after it was granted to Sir William Petty in 1656 as payment for completing the Down Survey, mapping Ireland. Petty laid out a new town in 1670, and although the town was attacked in 1685, Kenmare was re-established and became a thriving coaching town on the route between Killarney and Bantry.

The names of the main streets that form a triangle at the centre of the town reflect the formative role played in Kenmare by the Petty-Fitzmaurice family. Their family titles include Marquess of Lansdowne, Earl of Shelburne and Earl of Kerry, and they have given those names to many streets and places in Dublin, in Calne in Wiltshire, and in Kenmare. 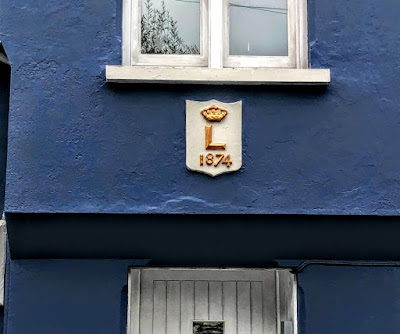 The Lansdowne emblems on a cottage on Market Street in Kenmare, Co Kerry (Photograph: Patrick Comerford, 2020)

I was staying overnight at the ‘Tom Crean Base Camp’ at the top of Main Street in Kenmare. Main Street was originally known as William Street, named after William Petty-Fitzmaurice (1737-1805), 1st Marquis of Lansdowne. As Lord Shelburne, he was the British Prime Minister in 1782-1783. In 1775, he renamed Nedeen as Kenmare and laid out the town in the triangular-pattern it retains to this day, was laid out.

Henry Street in Kenmare was named after his second son, Henry Petty-Fitzmaurice (1780-1863), 3rd Marquis of Lansdowne and British Chancellor and Home Secretary. Shelbourne Street also takes its name from one of the family titles, although the title originated in Co Wexford.

When I visited Kenmare a few weeks earlier, at the end of summer, I had walked around the town, and visited its two parish churches and a former convent. But when I returned earlier this week, I found the Lansdowne legacy in many buildings, including the old courthouse, which now houses the local heritage, and the former Market House, now converted into offices and shopfronts. 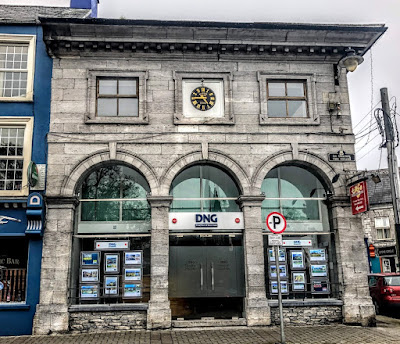 The former Market House is said to have been designed by Sir Charles Barry (Photograph: Patrick Comerford, 2020)

The former Market House on the corner of the Square and Market Street, facing the Fair Green, is a three-storey Classical style building designed by renowned English architect Sir Charles Barry (1795-1860) for the 3rd Marquis of Lansdowne. Barry’s best-known work is the Houses of Parliament or Palace of Westminster.

The Market House has a three-bay double-height arcade on the ground floor with round-headed openings and moulded archivolts and square-headed windows on the first floor. 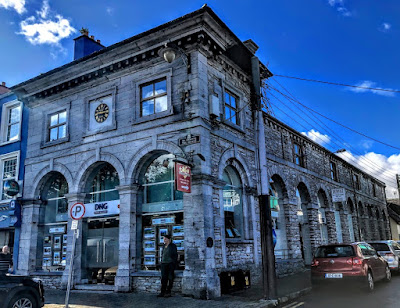 The nine-bay side of the Market House on Market Street (Photograph: Patrick Comerford, 2020)

The clock on the first floor of the façade bears the date 1840.

Behind the Market House, Market Street was once known as Pound Lane because the town’s animal pound was located there. During the 19th century, many of the town tradesmen in Kenmare, such as leatherworkers, blacksmiths and tinsmiths, moved into the area. 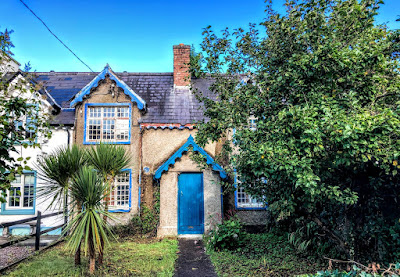 In the second half of the 19th century, the Lansdowne Estate built a number of rows of attractive cottages in this area. Some of these cottages are decorated with simplified variations on the heraldic logos of Lord Lansdowne, with coronets, the letter ‘L’ and the dates 1874.

Emmet Place on Market Street is a group of terraced, three-bay, single-storey houses with half-dormer attics. They were built ca 1880, with single-bay single-storey gabled projecting porches at the centre of each façade.

In my imagination, these houses could be straight out of Trumpington or Grantchester. 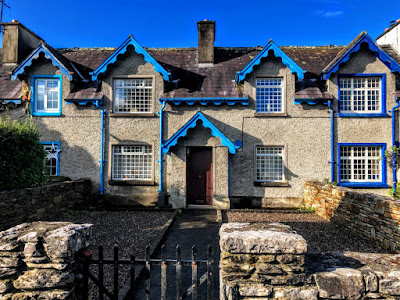 A large number of the houses on Emmet Place and Parnell Place retain many original features (Photograph: Patrick Comerford, 2020)

A large number of these houses retain many of their original features, including projecting gabled porches with scalloped bargeboards and timber boarded doors.

Around the corner in Parnell Place, a similar group of terraced, three-bay, single-storey houses have half-dormer attics, built at the same time and in the same style of pretty Victorian cottages.

The change of street names to Emmet Place and Parnell Place, and neighbouring Davitt Place, in this part of the town in the early 20th century was symbolic of the rise of nationalist politics in the Kenmare area.

The Kenmare Stone Circle dates back to the Bronze Age (Photograph: Patrick Comerford, 2020)

Market Street leads up to the Kenmare Stone Circle. This is the largest stone circle in south-west Ireland, where about 100 examples can be found. Stone circles were built during the Bronze Age (2200 to 550 BC) for ritual and ceremonial purposes. Some studies indicate they were once oriented on certain solar and lunar events, such as the position of the sun on the horizon on a solstice.

The Kenmare Stone Circle may be oriented on the setting sun, and it may date back 3,000 years. This is the only such monument so close to a town centre in Ireland. Although it is known locally as the ‘Druid’s Circle,’ its original use or purpose remains unknown. Some speculate it may have served a ritual purpose, others that it was used as primitive calendar or a burial site.

The monument consists of 15 stones in a circular form, with a centre stone that appears to be a burial monument of the type known as a Boulder Burial. These are rarely found outside south-west Ireland.

The rock used to make the circle is greenstone and brownstone. But this is not found locally and had to be brought from several miles away.

Cromwell’s Bridge … the meaning of its name and its origins are lost in the mists of time (Photograph: Patrick Comerford, 2020)

Back down in Market Street, a lane behind Emmet’s Place leads through back gardens and allotments, across a foot bridge over the Finnihy River, and upstream to Cromwell Court and Cromwell’s Bridge.

The antiquity of this hand-crafted bridge is unknown. One account claims it was built by Franciscan friars in the seventh century – but the Franciscans were not founded by Saint Francis until the 13th century.

Local lore believes it was built by Augustinian friars in the 11th century, although the Augustinians first came to Ireland with the Normans, and their first house in Ireland was founded in Dublin ca 1280.

This narrow bridge possibly had walls of earth and stone, although little evidence now remains.

The Finnihy River is tidal, and this may have necessitated the exaggerated arch of the bridge, which stands almost 6 metres above the average water levels in the river.

One thing is certain: its name has no association with Oliver Cromwell: although Sir William Petty, who first conceived of laying out a new town in Kenmare, had surveyed and mapped Ireland during the Cromwellian era, Cromwell himself never came to Kenmare.

Instead, the name of Cromwell’s Bridge is believed to be a corruption of the Irish word cromeal, meaning a moustache, because its shape. 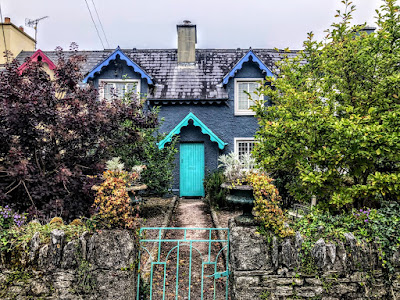