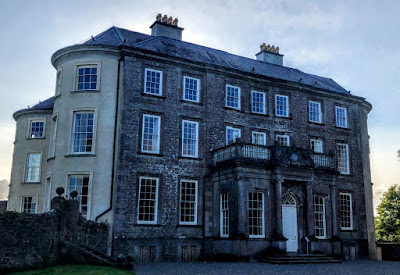 Doneraile Court in north Cork opened to the public in 2019 after a half-century restoration project (Photograph: Patrick Comerford, 2020)

After visiting Buttevant last week, I also visited Doneraile Court, a country house set in 160 ha (400 acres) of walled parkland near Doneraile, in north Co Cork, and that has recently opened to the public.

Standing on the banks of the River Awbeg, the house dates from the 1720s, when it was built by Arthur St Leger, 1st Viscount Doneraile, and it was the seat of the St Leger family until the mid-20th century.

Sir Anthony St Leger came to Ireland in 1537, and became Lord Deputy of Ireland in 1540. The St Leger family came to Doneraile in 1629 and remained there until 1969, when the property was sold to the Land Commission. The house has been in the care of Irish Georgian Society and the Office of Public Works in 1994, and opened to the public last year (2019).

Doneraile and other estates were bought in 1629 by Sir William St Leger, Lord President of Munster, who moved into the 13th-century Doneraile Castle. By 1645, the castle had been attacked and burned several times and was so badly damaged that it was abandoned.

The present house at Doneraile Court was first built in the late 17th century, using some of the stonework of the old castle. It was extensively remodelled Arthur St Leger, 1st Viscount Doneraile, and the current façade was added in 1725 by the architect Isaac Rothery.

Arthur St Leger’s daughter, Elizabeth St Leger Aldworth, was the first – and supposedly the only – woman admitted to the Freemasons. Her memorial in Saint Fin Barre’s Cathedral, Cork, was erected by the Freemasons of Cork.

Arthur St Leger, 2nd Viscount Doneraile, had a short-lived second marriage to Catherine Conyngham that took place under dubious circumstances in 1725. She left him after only a month, and he claimed he had been too drunk to be sure that the marriage had taken place. 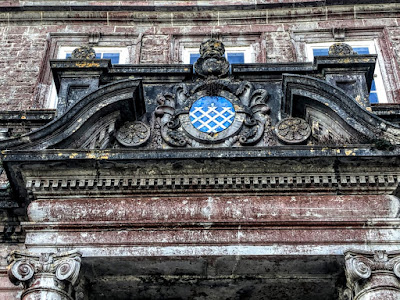 The St Leager arms above the portico at Doneraile Court (Photograph: Patrick Comerford, 2020)

When Hayes St Leger (1702-1767), the 4th Viscount, died without any children, the property was inherited by Elizabeth Aldworth’s son, St Leger Aldworth, who was MP for Doneraile in 1761-1776. To inherit the estate, he had to take the surname St Leger, becoming known as St Leger St Leger. He was given the title of Baron Doneraile in 1775, and the title of Viscount Doneraile was revived for him in 1785, so that he became the first viscount of the second creation.

Throughout the 19th century, the St Leger family owned and bred horses for hunting and racing on the estate, and gave its name to the St Leger, a famous race.

The literary heritage of Doneraile found expression in popular verse with Patrick O’Kelly’s self-funded publication of The Litany for Doneraile in 1812. The poet piles curses on the town because of a lost watch. Fortunately, the then Lady Doneraile replaced it for him, prompting a retraction in the form of Blessings on Doneraile, which wishes far nicer things on the town.

Hayes St Leger (1818-1887), 4th Viscount Doneraile, died from rabies after he was bitten by his pet fox, and had no sons to inherit the estate and titles. His only surviving daughter, the Hon Ursula Clara Emily St Leger, became Lady Castletown in 1874 when she married Bernard Edward Barnaby Fitzpatrick (1848-1937), 2nd Baron Castletown.

While Lord and Lady Castletown lived at Doneraile Court, Oliver Wendell Holmes Jr (1841-1937), a judge of the US Supreme Court justice, visited Doneraile on several occasions. He carried on an extensive correspondence Lady Castletown and may have had an affair with her. He also developed a lifelong friendship with Doneraile’s parish priest, the writer Canon Patrick Sheehan (1852-1913), author of My New Curate, Glenanaar and The Graves of Kilmorna. 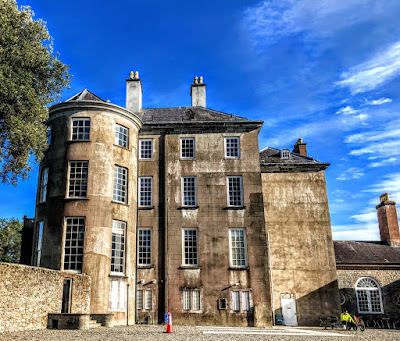 The house at Doneraile Coirt was extended and developed throughout the 19th century (Photograph: Patrick Comerford, 2020)

While the Castletowns were living at Doneraile, the estate experimented with market gardening, and the house was extended to include a dining wing and a conservatory, neither of which survive.

The house has a seven-bay, three-storey façade of cut stone with curved end bows added later in the 18th century. The interior includes an early 18th century panelled room and a late 18th century oval staircase hall with Adams-style plasterwork on the ceiling.

A nine-bay Gothic Revival style conservatory built in 1825 has since been demolished. Other 19th century additions included a three-bay porch at the front, a vast dining room in 1869 that was demolished during restoration work a century later, and an octagonal kitchen and game store also built in 1869. Other improvements on the estate included cottages, lodges, farm buildings and stables.

The Doneraile demesne included some 3,200 ha (8,000 acres) in 1870. But it was gradually reduced in size with the sale of land to tenants under various Land Acts in the late 19th and early 20th centuries.

Lady Castletown died at Doneraile in 1927. By then, the Doneraile title and estates had passed to her distant cousin, Edward St Leger (1866-1941), 6th Viscount Doneraile.

Hugh St Leger (1869-1956), 7th Viscount Doneraile, was the last Lord Doneraile to live in the house. He was born in New Zealand and lived there before inheriting the title and estate in 1941. The remaining demesne land, including Doneraile Wildlife Park, was sold to the government in 1943. He and his wife had no children and he died in 1956. Mary (née Morice), the widowed Lady Doneraile, remained at Doneraile Court, and oversaw the sale of the property to the Land Commission, beginning the process of preserving Doneraile Estate for the nation. 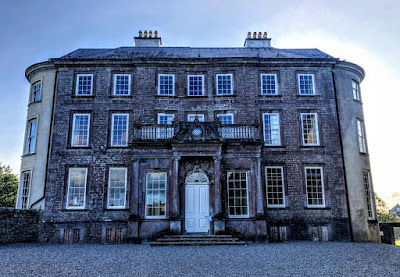 Doneraile Court was sold to the state by the estate trustees in 1969 (Photograph: Patrick Comerford, 2020)

Richard St John St Leger (1923-1983), a 44-year-old Californian truck driver, arrived in Ireland with his wife Melva, a trapeze artist, and their five children in 1968 and he claimed to be the 9th Viscount Doneraile. Dick filed an application with the House of Lords to have his claim recognised. While this process was under way, and despite objections from the estate’s trustees, he moved into the house with his family, initially living with the widowed Lady Doneraile, although she later moved into a cottage on the estate.

The trustees agreed with the Land Commission to sell Doneraile Court and its lands for £56,800. But, meanwhile, Richard St Leger was refurbishing the house with plans to open it to the public.

The Irish Georgian Society offered support and sent a large number of volunteers to help before a planned opening ceremony in July 1969 with the US Ambassador to Ireland. However, just days before, the trustees gained a High Court injunction against opening Doneraile Court. The trustees then proceeded to sell its entire contents to a consortium of antique dealers.

The Land Commission completed the purchase of the estate, and Richard St Leger never proved his claim to the title. He moved out of the house, returned to the US and died in 1983. The title is now used by his son, Richard Allen St Leger, as 10th Viscount Doneraile.

The Doneraile estate passed into state ownership through the Office of Public Works and the Department of Forestry and Fisheries. Care was lavished on the parkland in preparation of opening it to the public, but the house began to show evidence of neglect and deterioration. Windows were broken by vandals, plasterwork began falling from the walls and the 19th century conservatory collapsed.

Doneraile Court was leased rent-free to the Irish Georgian Society in 1976 on condition that the society restored the building. By 1978, the society had spent £25,000 on structural repairs and that figure climbed steadily. By 1983, an estimated £40,000 had been spent on the house, although much of the work had been undertaken by volunteers.

The park at Doneraile opened to the public in 1984, a tearoom opened in the old kitchen in the house in 1990, and the ground floor of Doneraile Court opened in 1992 with a variety of exhibitions.

Two years later, with the greater part of the restoration work completed at a cost of £500,000, the Irish Georgian Society handed the house back to the Office of Public Works. But for the next 25 years, the house remained closed and shuttered until it opened to the public last year (2019).

A room in Doneraile Court is dedicated to the writer Elizabeth Bowen. Her home nearby at Bowen’s Court in Kildorrery was demolished in 1961.

The kitchen wing from the 19th century is the home of the Doneraile Court tearooms, and we finished our visit there sipping coffees. 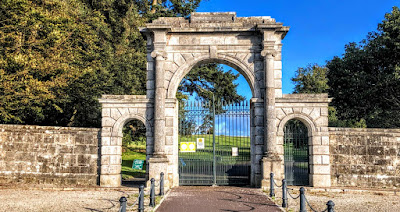 The ‘Triumphal Arch’ at the entrance to Doneraile Court (Photograph: Patrick Comerford, 2020)

The ‘Triumphal Arch’ at the entrance to Doneraile Court is believed to date from ca 1830 and has been attributed by some sources to George Pain. It was erected during by Hayes St Leger, 3rd Viscount Doneraile, after a new road was made around the edge of the parkland to replace an earlier road that ran directly in front of the house.

The Ionic capitals on the pillars at either side of the main arch contrast with the Doric order used for the pedimented lodge immediately inside the gates. Both have been restored by the Office of Public Works.

The grounds around the house are laid out in the style of Capability Brown, the deer park has Killarney Red, Sika and Fallow deer and the meadows have a herd of Kerry cattle.

Since opening its doors last year, Doneraile Court is at the heart of this great estate once again. The OPW in partnership with the Crawford Art Gallery exhibits significant works at Doneraile Court, and guided tours are available

Doneraile Court’s unhappy past is behind it, and it seems the future of the house is secure. 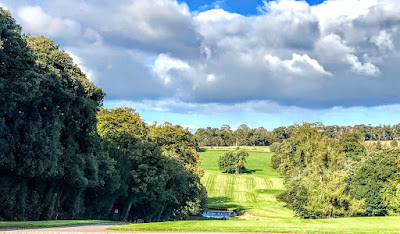 The park at Doneraile opened to the public in 1984 (Photograph: Patrick Comerford, 2020)

Is it not the case that the 4th Viscount was killed / murdered ... euthanised ... by being smothered by the servants ... to end his fits etc from rabies?

The Californian Richard St Leger does seem to be recognized as the 10th Viscount, though.