Walking around Kilmallock,
searching for the ruins of
the ‘Baalbec of Ireland’ 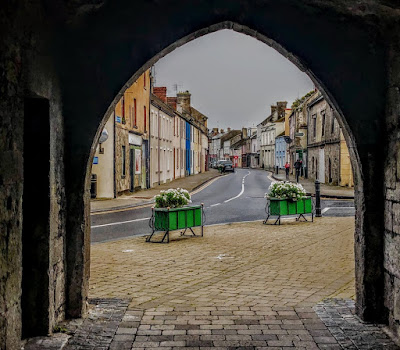 Looking through the arch of King John’s Castle to the Main Street in Kilmallock, Co Limerick (Photograph: Patrick Comerford, 2020)

Bagenalstown in Co Clarlow claims it is the ‘Versailles of Ireland.’ The spelling of Valentia Island in Co Kerry is sometimes confused with Valencia in Spain. But Kilmallock in Co Limerick was once known as the ‘Baalbec of Ireland.’

The town was known as the ‘Baalbec of Ireland’ because of its street were once filled with so many ruined buildings from the past.

Kilmallock, about 8 km from Charleville, is a mediaeval town where parts of the mediaeval walls and fortifications still stand. The mediaeval sites include the ruins of a Dominican Priory, the ruins of a collegiate church, and King’s Castle or King John’s Castle.

An early 19th century visitor wrote, ‘Some sixteen miles from Limerick, in the direction of Cork, the Irish Baalbec claims the attention of the passer by. It is a place to arouse sympathies with departed greatness; to remind the sojourner that earthly fabrics bow to Time. Here is a combination of ancient glory and present debasement – faded grandeur and upstart pretension, not to be rivalled, perhaps, in any other land …’ 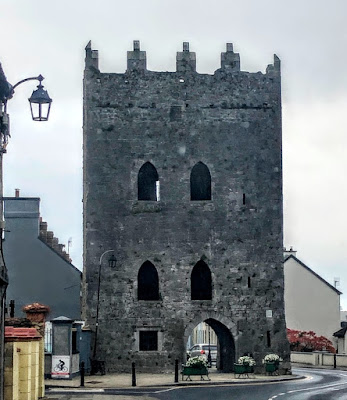 King John’s Castle was built in Kilmallock in the 15th-century (Photograph: Patrick Comerford, 2020)

Although I am confined to Co Limerick during the present phase of the pandemic lockdown, two of us decided to explore the streets and historical buildings of mediaeval Kilmallock at the weekend.

Kilmallock traces its origins to Saint Mocheallóg, who built a church in the area in the sixth or seventh century, and the Irish name Cill Mocheallóg means ‘the Church of [Saint] Mocheallóg.’

The Anglo-Normans may have built a castle here in 1206, but nearby ruins, unearthed in 1986, turned out to be Neolithic houses built by local people over 5,000 years ago.

Kilmallock was of considerable importance by the late mediaeval period and one of the main urban areas in Ireland, second only to Limerick City in the region. The Collegiate Church of Saint Peter and Saint Paul was built by 1241, and the Dominican Priory in 1291.

The mediaeval town was a creation of the Desmond FitzGeralds and the White Knights. It had a corporation with the power to raise taxes to fund building town walls. 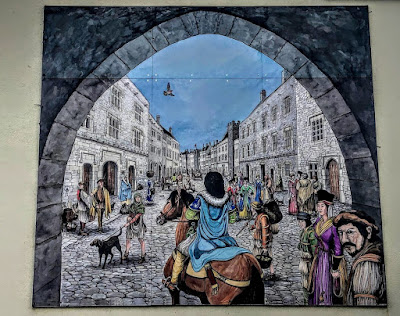 Kilmallock was fortified in 1375, and five fortified towers protected the entrances to the town. The 15th-century King John’s Castle is a fine example of a Peel Tower, with its wide arched openings prompting speculation that it was originally a town gate.

Over the centuries, the ‘castle’ has had a variety of uses, from a citadel to an arsenal, a school to a blacksmith’s forge, and the venue for meetings of Kilmallock Corporation. 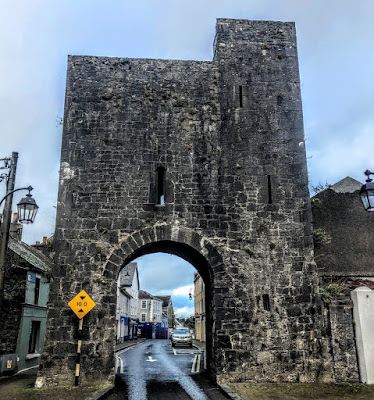 The last surviving town gate, the Blossom Gate, is located on Emmet Street. It was built in the 16th century, possibly as an improved defence for the south-west of the town. The Blossom Gate formed the west entrance to the town.

It was formerly known as Bla or Blath (meaning flower, green, plain, field, enclosure or yellow in Irish) or Blae (meaning garment or sheet in Norse), but it was also known as Mallow and Pigeon Castle. 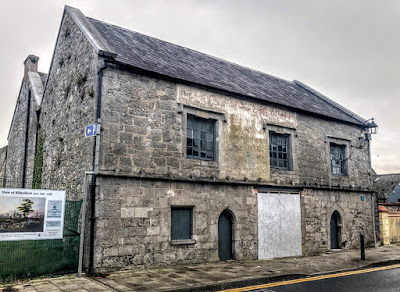 As Kilmallock grew in prosperity, so too did the quality of its merchants’ houses. The Stone Mansion is the best surviving example of the medieval merchants’ houses that once lined the streets of Kilmallock. This house was probably built in the 16th century. The house originally had three storeys and is readily identifiable in a painting of Kilmallock by John Mulvany (1766-1838).

In 1571, the town was burned by the rebel Earl of Desmond during the Desmond Rebellions. He surrendered in the Collegiate Church of Kilmallock in 1573.

The Town Walls were rebuilt by Sir John Perrott, who clearly recognised the strategic value of the town and made it a garrison. The town received a new charter in 1584, and in 1585 Kilmallack became a parliamentary borough with its own MP. The importance of the town can also be seen in the Nine Years War (1594-1603) when it was besieged in 1598 by rebels and freed by Norris, Lord President of Munster.

During the Confederate and Cromwellian wars, the Dominican Priory in Kilmallock was attacked and destroyed by a Parliamentary army under Lord Inchiquin in 1648.

The town met further destruction in 1690 at the hands of marauding Jacobites under the command of the Duke of Berwick. Kilmallock continued to lose its key position in the area with the development of Charleville in the later 17th century. These changes had a lasting effect, stifling the growth and prosperity of Kilmallock for almost 200 years.

Kilmallock had lost its strategic importance, and the town’s fortunes were fading. The great walls had been breached, its buildings burned and left to decay and ruin, its wealth purloined, and its population dispersed. For many years after, it was described as ‘an abode of wolves.’ 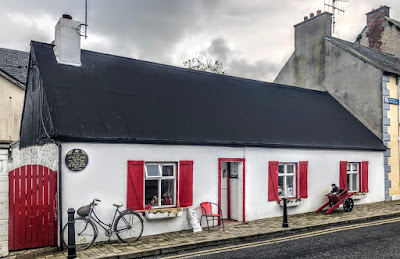 The poet Andrias Mac Craith died in a cottage on Wolfe Tone Street, near the bridge over the River Loobagh (Photograph: Patrick Comerford, 2020)

The 18th century poet Andrias Mac Craith, better known as An Mangaire Súgach, was born in Kilmallock. His best-known poem, Slán le Máigh, is a song praising the entire Maigue valley at a time when he was temporarily exiled from the locality. The house where he died, Tigh an Fhile (‘The Poet’s House’), is at the bottom of Wolfe Tone Street, near the bridge over the River Loobagh.

Despite becoming known as the ‘Baalbec of Ireland,’ many fine shops, commercial premises and houses were built on the streets of Kilmallock as the 19th century unfolded, displaying a confidence in the town’s prospects and future. 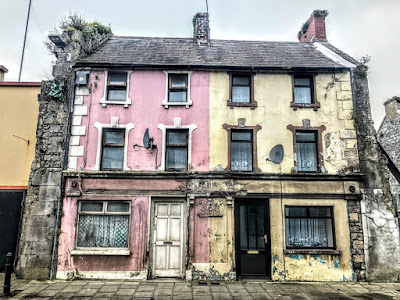 A pair of houses with matching shopfronts on Sarsfield Street (Photograph: Patrick Comerford, 2020)

A pair of houses with matching shopfronts on Sarsfield Street, built ca 1810, display attractive, balanced proportions, despite the loss of some early features and their present apparent neglect. They include well-executed render shopfronts and a decorative render motif that adds artistic interest to the composition.

The Allied Irish Bank building on Lord Edward Street was built as the Munster and Leinster Bank on the site of the Ivy Gate in 1877. It was designed by the Cork architects, Henry and Arthur Hill, and it displays subtle Gothic Revival and Elizabethan style references in its façade. 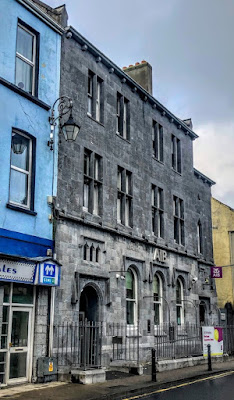 The AIB Bank on Lord Edward Street stands on the site of the Ivy Gate (Photograph: Patrick Comerford, 2020)

Kilmallock was at the centre of bitter fighting in July 1922 during the Irish Civil War. It was held by anti-Treaty forces under Liam Deasy and was eventually taken by Free State troops under Eoin O’Duffy.

As part of a brief but vicious sectarian campaign in July 1935, arsonists burnt the Church of Ireland parish church to the ground, causing extensive damage.

The Dublin-Cork railway line passes by the town, but the station is now closed. The nearest train station is in Charleville, 5 miles south west of Kilmallock. 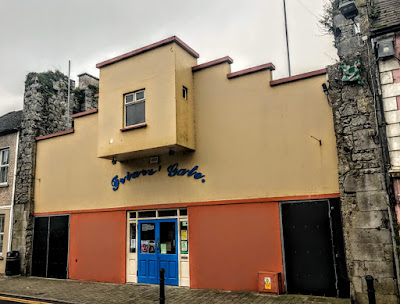 The Friars Gate Art Gallery holds temporary exhibits by local and other artists, and the Friars’ Gate Theatre is also home to the Ballyhoura Heritage Centre.

Today, Kilmallock has a population of 1,231 and is the fourth largest town in Co Limerick. It is the hub of the Ballyhoura Region, and attracts visitors looking for activity, leisure and cultural breaks. 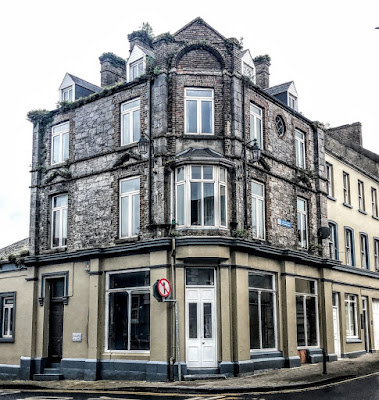 Kilmallock’s reputation in recent centuries as the Baalbec of Ireland is still recalled in the name of Baalbec House, on the corner of Lord Edward Street and Wolfe Tone, This corner house is an important part of the streetscape in Kilmallock, and represents the continued economic prosperity of Kilmallock into the late 19th century.

This is an end-of-terrace, corner house, with two-bay three-storey house with a dormer attic. It is built in dressed limestone, with high quality stone masonry, and decorative details that date from the late 19th century. There is a chamfered entrance bay on the north side with a brick pediment, rendered walls on the ground floor with render pilasters, a canted oriel window on the first floor, and an oculus on the second floor. 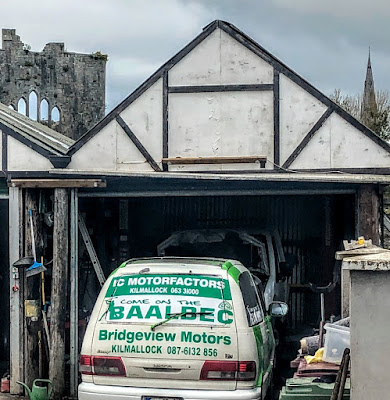 The name Baalbec is used with pride by the local GAA teams (Photograph: Patrick Comerford, 2020)

And the name Baalbec is used with pride by the local GAA teams.

As for Baalbek itself, it was listed as a UNESCO World Heritage site in 1984. Today it is a city of 83,000 people in the Beqaa Valley in Lebanon, about 67 km north-east of Beirut.

In Greek and Roman times, Baalbek was also known as Heliopolis (Ἡλιούπολις, ‘Sun City’). It is home to the Baalbek temple complex that includes two of the largest and grandest Roman temple ruins: the Temple of Bacchus and the Temple of Jupiter. 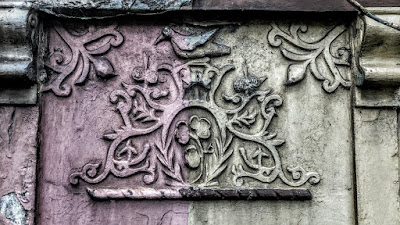