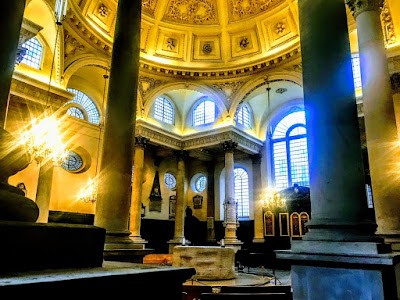 Inside Saint Stephen Walbrook, a Wren church in the heart of the City of London (Photograph: Patrick Comerford)

It must have been about 50 years ago, while I was training to be a chartered surveyor with Jones Lang Wootton, that a file for an investment or development property went missing. It was an important portfolio, and ought to have been filed under ‘S’ for ‘Saint Stephen’s Green.’

Eventually, the file was found under the letter ‘G’.

‘I filed it under ‘G’ for Green,’ the person who did the filing explained.

But for many Dubliners, it is probably not Saint Stephen’s Green, but ‘Stevenses Green,’ as in ‘Dr Stevenses Hospital’ and ‘Stevenses Day.’

I find it hard to call today ‘Boxing Day.’ For me, 26 December is always going to be Saint Stephen’s Day.

Stephen is a family name: my grandfather, father, eldest brother and a nephew were baptised Stephen. But my reasons for insisting on retaining the name of Saint Stephen’s Day is not some quirky genealogical sentimentality or some displaced filial loyalty.

Saint Stephen the Deacon is the Protomartyr of Christianity. The Greek word name Στέφανος means ‘crown’ or ‘wreath’ and the Acts of the Apostles tell is that Saint Stephen earned his crown at his martyrdom when he was stoned to death around the year AD 34 or 35 by an angry mob encouraged by Saul of Tarsus, the future Apostle Paul.

Stephen was the first of the seven deacons chosen in the Apostolic Church in Jerusalem. While he was on trial, Saint Stephen experienced a theophany: But filled with the Holy Spirit, he gazed into heaven and saw the glory of God and Jesus standing at the right hand of God. ‘Look,’ he said, ‘I see the heavens opened and the Son of Man standing at the right hand of God!’ (Acts 7: 55-56).

The Lion’s Gate in the Old City of Jerusalem is also known as Saint Stephen’s Gate because of the tradition that Saint Stephen was stoned there. In AD 415, a church was built Saint Stephen’s honour in Jerusalem to hold his relics. The relics were later moved to Constantinople. Today, those relics are said to be buried under the altar of the Church of San Lorenzo fuori le Mura in Rome.

Today is a public holiday in the United Kingdom as Boxing Day. But as Saint Stephen’s Day, today is still a public holiday in Ireland and many other countries, including Australia, Austria, Canada, Croatia, the Czech Republic, Finland, Germany, Italy, New Zealand, Poland, Serbia, Slovakia, and parts of France, the Philippines and Spain.

In the Orthodox Church, Saint Stephen’s Day is celebrated on 27 December, and is known the ‘Third Day of the Nativity.’ 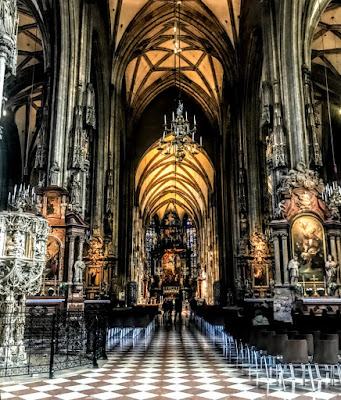 The interior of of the Stephansdom or Saint Stephen's Cathedral, Vienna (Photograph: Patrick Comerford, 2019)

In my morning and evening prayer diaries in my blog postings this morning and this evening, drawing on resources produced by USPG and Lichfield Cathedral, I am using photographs from Saint Stephen Walbrook, a Wren church in the heart of the City of London that has been listed by Sir Nikolaus Pevsner as one of the 10 most important buildings in England, and a stained-glass window in Lichfield Cathedral, depicting the martyrdom of Saint Stephen.

Saint Stephen’s Church in Mount Street Crescent, Dublin – popularly known as the ‘Pepper Canister Church’ – is one of the last churches built in the classical style in Dublin. Saint Stephen’s, which opened in 1824, was designed by John Bowden and Joseph Welland. The tower and portico were modelled on three elegant monuments in Athens: the Erechtheum on the Acropolis (the portico), the Tower of the Winds (the campanile), and the Monument of Lysicrates (the cupola). But the Victorian apse, which was added in 1852, owes its inspiration to the Oxford Movement.

However, the most impressive church I have visited that is named after the first martyr is the Stephansdom, the Cathedral of Saint Stephen, in Vienna, which dates back to 1147.

Having visited the Stephansdom many years ago, while I was a panellist at a seminar organised by the Diplomatic Academy of Vienna, I returned to visit the cathedral last year.

A memorial tablet there recalls Mozart’s relationship with the cathedral. This was his parish church when he lived at the ‘Figaro House’ and he was married there and two of his children were baptised there. He was named an adjunct music director there shortly before his death, and his funeral was held in the Chapel of the Cross in the cathedral in 1791.

The Stephansdom has 23 bells, and it is said Beethoven realised the full extent of his deafness when he saw birds flying from the bell tower and realised he could not hear the bells toll.

A few years ago, I also visited Saint Stephen’s House, the theological college in Oxford popularly known as ‘Staggers,’ which is firmly rooted in the Anglo-Catholic tradition, maintaining high standards of liturgy and intellectual rigour.

Saint Stephen’s House was founded in 1876 by leading Anglo-Catholics members of the Anglo-Catholic Movement, including Edward King, then Regius professor of Pastoral Theology at Oxford and later Bishop of Lincoln.

King was one of the outstandingly holy men of his time. Other founding figures included Henry Scott Holland, one of the leading figures in the development of the Christian social teaching of the time. It was he who suggested the name of the house.

Saint Stephen’s has moved since its foundation, and is now located at Iffley Road in East Oxford in the former monastery of the Cowley Fathers, where it is said Dietrich Bonhoeffer decided to return to Germany where he met with martyrdom. 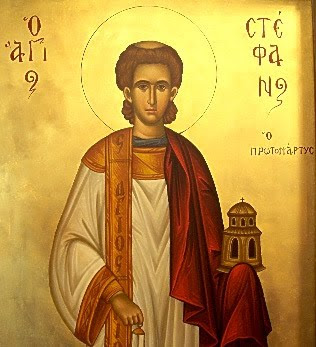