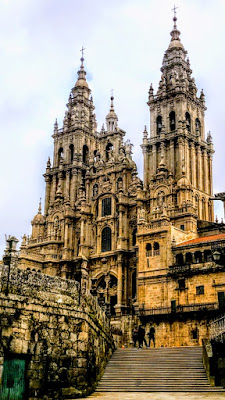 The west façade of the cathedral in Santiago de Compostela, facing onto the Praza do Obradoiro (Photograph: Patrick Comerford)

This is Wednesday in Holy Week (31 March 2021), the last week in Lent. This week I am offering photographs from seven churches that I think of as places of pilgrimage and spiritual refreshment (I have reflected earlier this Lent on the place of the chapel of Saint John’s Hospital, Lichfield, and of Lichfield Cathedral, in my spiritual life).

My photographs this morning (31 March 2021) are from the Cathedral of Saint James in Santiago de Compostela. After Rome and Jerusalem, Santiago is the third most visited place of pilgrimage in the Christian world, and I visited there in January 2019.

The history of the Camino de Santiago dates back to the early ninth century and the discovery of the tomb of Saint James in the year 814. Since then, Santiago de Compostela has been a destination for pilgrims from throughout Europe. The Camino has become a popular spiritual quest in recent decades, even for many pilgrims who have few if any church connections. 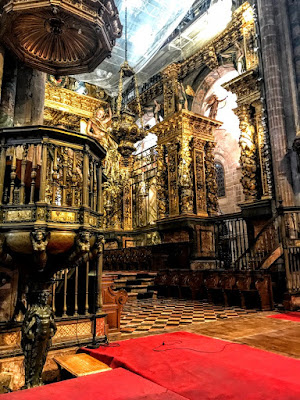 The ‘Botafumeiro’, the large thurible above the crossing, is the largest censer in the world (Photograph: Patrick Comerford)

21 After saying this Jesus was troubled in spirit, and declared, ‘Very truly, I tell you, one of you will betray me.’ 22 The disciples looked at one another, uncertain of whom he was speaking. 23 One of his disciples—the one whom Jesus loved—was reclining next to him; 24 Simon Peter therefore motioned to him to ask Jesus of whom he was speaking. 25 So while reclining next to Jesus, he asked him, ‘Lord, who is it?’ 26 Jesus answered, ‘It is the one to whom I give this piece of bread when I have dipped it in the dish.’ So when he had dipped the piece of bread, he gave it to Judas son of Simon Iscariot. 27 After he received the piece of bread, Satan entered into him. Jesus said to him, ‘Do quickly what you are going to do.’ 28 Now no one at the table knew why he said this to him. 29 Some thought that, because Judas had the common purse, Jesus was telling him, ‘Buy what we need for the festival’; or, that he should give something to the poor. 30 So, after receiving the piece of bread, he immediately went out. And it was night.

Let us give thanks for our Lenten journey as we prepare to celebrate the passion, death, and resurrection of Christ. 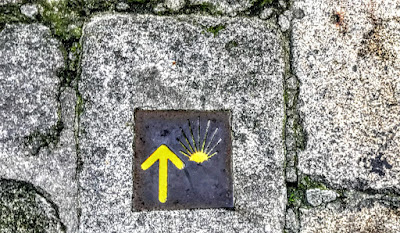 A pilgrim marker, with a pilgrim shell and a bright arrow, along the Camino route to Santiago (Photograph: Patrick Comerford)